Review: African soldiers find kinship in the trenches of World War I 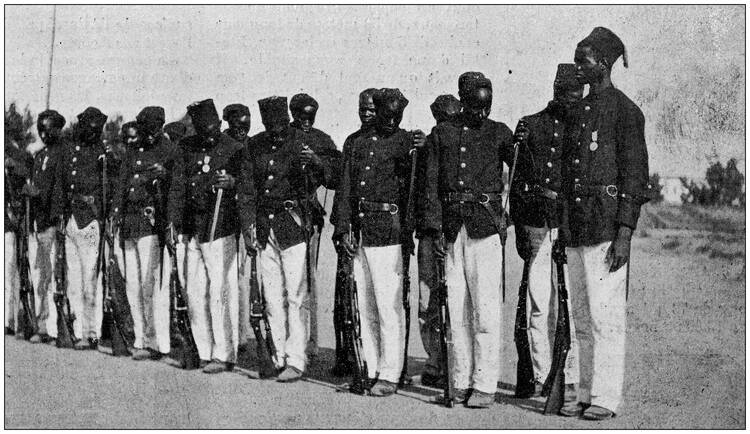 Although the peoples of Africa had little direct involvement with the causes of the First World War, European colonial powers conscripted nearly two million soldiers from Africa and sent them to the front lines. France alone sent about 450,000 troops from West Africa and North Africa to fight against the Germans. About half of these men came from Senegal.

Their experience provides much of the background for David Diop’s disturbing second novel, At Night All Blood Is Black. The novel won the 2021 Booker International Prize, considered to be the most prestigious award for fiction in translation. Lucy Hughes-Hallett, chair of the judges, noted the terrifying power of this story of warfare, love and madness.

Born in Paris to an African father and a French mother, Diop was raised in Senegal and grew up to become a university professor. He teaches French and African literature and is known for his study of prejudice and its negative impact on both Black and white lives. Diop’s first book, 1889, l’Attraction Universelle, was also a work of historical fiction. Describing the experiences of 11 members of a Senegalese delegation to the 1889 Exposition Universelle in Paris, the novel was inspired by 19th-century “human zoos,” in which Black people were exhibited behind bars with monkeys as objects of curiosity.

In an interview, Diop said that the Black soldiers of World War I were part of a “silenced history.” Their mistreatment was underreported because their marginalization refuted the French narrative that colonization was humane.

France sent about 450,000 troops from West Africa and North Africa to fight against the Germans in World War I. About half of these men came from Senegal.

Diop considers the effects of colonization to be horrific, not humane, and says as much in his second novel, translated from the French by Anna Moschovakis, an editor, poet and translator. Moschovakis’s English translation reads like a prose poem. Adding authenticity to the narrative, Moschovakis keeps several Wolof (Senegalese) words.

The book first came out in French in 2018, the year Europe commemorated the 100th anniversary of the end of World War I. As part of the ceremony, the presidents of France and Mali introduced a monument to the “Black Army”—West African soldiers from France’s former colonies. Diop’s story follows two of those soldiers, Alfa Ndiaye and his stepbrother Mademba Diop, showing what can happen when people treated like savages become savage in a brutal, self-fulfilling prophecy.

The narrative centers on the filial love between the two Senegalese riflemen, who were close childhood friends and joined the French army because they hoped to become French citizens at the war’s end.

In addition to the relationship between Alfa and Mademba and their experiences before and during the war, the novel covers Alfa’s childhood closeness to his elderly father and beautiful young mother, his father’s fourth wife. Alfa was adopted by Mademba’s family after his mother disappeared—probably captured by slave traders. After that, he and Mademba became more than brothers. When the two fought together in the war, Alfa says he “glued” himself to Mademba, “so the bullet that hurt him would hurt me…. God’s truth, on attack days, we were elbow to elbow, shoulder to shoulder.” But only Mademba was hit.

Alfa gradually reveals that the mortally wounded Mademba begged Alfa to slit his throat to avoid the shame of dying with his intestines spilled on the ground. He asked Alfa three times to kill him and put an end to his misery. But Alfa believed killing—even mercy killing—was wrong. To kill Mademba would be to play God or the devil, Alfa says. Moreover, it would go against the inner voices of his family, his Wolof people, the Koran and his ancestors. So he refuses Mademba three times.

The allusion to Jesus asking Peter three times if he loved him (Jn 21:15–17) gives the book biblical overtones. The reference also gives the reader a glimpse into Alfa’s spiritual nature. Alfa repeatedly wonders how he can love his soul brother and not kill him when he is suffering so much. Yet how could he kill his beloved brother when killing is wrong? How could he give up any hope that Mademba might survive?

The novel is structured as an interior monologue, and Alfa’s continual questioning of himself and his motives is reminiscent of Hamlet’s “to be or not to be” soliloquy. The arc of the novel, which proceeds from the perspective of someone who witnesses evil and becomes lost in the evil of his surroundings, evokes “Hamlet” even further.

In At Night All Blood Is Black, David Diop delves into the way war destroys not just the body, but also the soul.

As he becomes increasingly mad, Alfa believes that he is an instrument of God’s punishment and is meant to avenge Mademba’s death by cutting off the hands of seven blue-eyed German soldiers. (That number, representing completeness in Genesis, offers another biblical allusion.) At first his fellow soldiers consider Alfa a hero, but they soon come to fear him; and he is sent to a psychiatric hospital, where doctors attempt to cure him. There he commits the ultimate crime.

Review: What does faith have to do with ‘getting it’? It’s a question for the whole family.
Diane Scharper

Although the English title is more graphic and alludes to the racial aspects of the book, I prefer the original French title, Frère d’âme, or “Soul Brother,” which is more reflective of the ethical core of this narrative as well as its notion of brotherhood among the Senegalese riflemen who served in World War I.

The original cover shows a Black soldier standing, as if for inspection. The cover of the English version shows a bloody severed hand; and while it is eye-catching, it misses the spiritual component of the novel, which is about the absence of God in wartime and the effect this has on humanity. “God is lagging,” Alfa says. In Alfa’s view, God cannot keep up with the bad actions of people and uses war as a way to punish entire generations.

Ultimately, Diop delves into the way war destroys not just the body, but also the soul. As this unnerving book ends, Alfa seems to have turned into a dëmm, the “devourer of souls” that everyone, including himself, fears.

Diane Scharper is the author of several books, including Reading Lips and Other Ways to Overcome a Disability. She teaches memoir and poetry for the Johns Hopkins University Osher Program.

@bmorebooks
Show Comments ()
Join the conversation: Login or create an account
Before you can comment, you need to update your profile to include your first and last name, as required in our comments policy. Then reload this page and you'll be set up for commenting. Update your profile