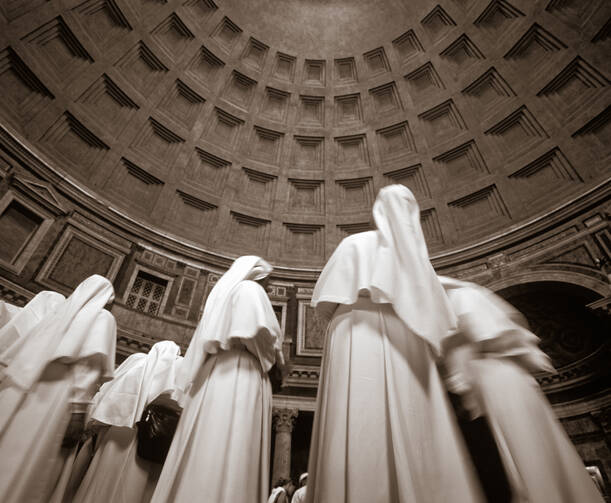 Two new novels, one a demonstration of continuing virtuosity by a much-lauded writer in mid-career, the other a smoldering, graceful debut, explore the lives of women religious. Both reveal the inner lives of sisters: women who, as Claire Luchette writes in Agatha of Little Neon, “were the opposite of invisible, but still difficult for people to see.”

Lauren Groff, a three-time National Book Award finalist, sets her novel, Matrix, in the 12th century, weaving historical details inspired by the mystical poet Marie de France (who some scholars think might have been Marie, Abbess of Shaftsbury, the half-sister of the English king Henry II) with the output of her formidable imagination to create an indelible fictional character.

Claire Luchette, whom the National Book Foundation just honored with its “5 Under 35” designation, sets Agatha of Little Neon in the contemporary church. A cash-strapped parish in upstate New York must send a group of four sisters packing to Woonsocket, R.I., to run a halfway house while the church is roiled by continued revelations of abuse by priests. Luchette’s protagonist, Sister Agatha, is quieter and more obedient than Groff’s Abbess Marie, but no less memorable. These two novels demonstrate their authors’ keen perceptions of human nature and their rare ability to portray a variety of expressions of faith.

The language of Lauren Groff's Matrix is powerful, precise and frequently glorious.

“She rides out of the forest alone. Seventeen years old, in the cold March drizzle, Marie who comes from France,” Groff begins Matrix. In 1158, Marie is sent from the court of Queen Eleanor of Aquitaine, who rules as the queen of England after marrying King Henry II. At court in Westminster, “Marie appalled everyone with her ravenousness, her rawness, her gauche, bigboned body.” Eleanor decides the “bastardess” Marie is too unlovely to marry off, so instead sends her to become the prioress of a royal abbey gripped by poverty and illness in the midst of England’s Dark Ages.

Marie feels wretched as she arrives at the “glum damp abbey,” stinging from her exile from court and from Eleanor, whom she loves. Marie has no vocation, and Groff writes that “her faith had been twisted very early in her childhood; it would slowly grow ever more bent into its own geometry until it was its own angular, majestic thing.” Groff shows how the sisterhood at this abbey is formed from a mix of unweddable royals stashed away for propriety, widows and young women called by God (or who were at least seeking to avoid the typical life of marriage and early death during childbearing years, a fate that awaited a third of all medieval women).

At first Marie fantasizes about escaping to become “a wildwoman or a lady brigand or a hermit in a hollowed trunk of a tree,” but she is a natural leader. At the abbey, Marie takes over the correspondence, sets about extracting funds from delinquent renters on the abbey’s lands and assigns people jobs according to their skills, even down to one mentally ill but artistically gifted sister who takes on the task of decorating the abbey and the manuscripts it produces, once Marie establishes a scriptorium.

Marie begins to have visions of the Virgin Mary, who instructs her on how to fortify the abbey. It evolves into a prosperous sort of feminine utopia—a place of learning, prayer, industry and health—once Marie has banished all men from the grounds. Marie never follows church law exactly; she finds no prohibition in the Bible, for example, against “bodily release” among women that “has nothing to do with copulation,” and eventually her aversion to men becomes so intense that she scandalizes many by saying Mass herself. But Groff makes it clear that Marie’s ability to gain power within the constrictions medieval society placed on women allows the other sisters’ goodness to flourish. “With their heads bent over their books like this, their words palely shining,” Groff writes, Marie “understands that the abbey is a beehive, all her good bees working together in humility and devotion.”

Groff’s language is powerful, precise and frequently glorious as she details Marie’s rise in stature. Marie analyzes and responds to shifting dynamics among the sisters and among the church hierarchy and royal relations, and in the end her work elevates others as much as it empowers her.

In the case of Claire Luchette’s Agatha of Little Neon, the protagonist, Sister Agatha, evinces a great deal more humility, chastity and obedience than Marie but displays a similar power of conviction and an abhorrence of the violations committed by the church’s men.

Sister Agatha found solace in the Catholic Church when her mother died when she was 11. Luchette joins her story at a turning point in 2005, when 81-year-old Mother Roberta—Agatha’s beloved, perpetually busy superior—begins to ail. Agatha and her sisters run a daycare center in their parish, but they are undercut by the arrival of a competing Montessori program and a dwindling number of parishioners. With little revenue to sustain their community and scandal and legal fees draining the Buffalo Diocese, Mother Roberta is set to retire. Agatha and the three other sisters are transferred to a halfway house in Woonsocket, R.I., painted “the color of Mountain Dew,” known as Little Neon.

Luchette writes with clarity, restraint and gentle humor. There is a confidence to the novel's pacing and an evident love for the characters. Although Sister Agatha narrates the book, she reveals herself slowly. She isn’t a showy type with unbridled appetites like Groff’s Abbess Marie. “As a girl,” Agatha explains, “as soon as I knew what prayer was for, I prayed for likeness. ‘Dear God,’ I said, every night. ‘Make me unexceptional.’” Agatha mostly listens when others talk, and characteristically, she received no clarion vocational call. Her nudge toward becoming a sister came when she encountered two nuns in the convenience store where she worked the night shift as a teenager. “There was no invitation. There was only that night in the gas station; it was late, and I was lonely, and I understood, watching the two nuns, that you could live your whole life alone if you weren’t careful. You might never find a decent place to hide from yourself.”

At Little Neon, where the sisters live with recovering addicts, Agatha begins to settle into the rhythms of their life. But soon the parish priest declares that he needs one of them to assume the position of geometry teacher at the local high school. The sisters put Agatha forward because she’s the “smartest,” even though she is so quiet that one sister thinks, “Those kids will eat her alive.” Despite being terrified to put herself out into the world in front of a classroom, Agatha does as she is asked. While working at the school and hanging out with the residents of Little Neon, Agatha evolves in her perspectives as the insistent drumbeat of revelations of sexual abuse of children by priests plays in the background.

When Agatha’s awareness of this injustice grows, spurred by the discovery of mistreatment of a beloved Little Neon resident by a bishop, it emerges from inside her like a lioness’s roar: “They had not imagined consequences, these priests, these men who could baptize and anoint and transubstantiate, men who could stand at the pulpit and speak of temptation, then, warped by a sense of impunity, do what they wanted in the world, including rape in the middle of the day, then sit on the other side of the confession box and listen to people list their sins.” Sister Agatha is not powerful like Groff’s Abbess Marie, but she seizes what power she can and uses it to full effect.

Matrix and Agatha of Little Neon differ in their historical settings, the temperaments of their protagonists and their prose style, but they both center on women perceiving the ways of the world with absolute clarity, realizing the extent of their power and deciding to use it for the good of others, no matter how many people that decision upsets.

Jenny Shank’s work has appeared in The Atlantic, The Guardian, The Washington Post and Image. Her story collection, Mixed Company, won the George Garrett Fiction prize, and her novel, The Ringer, won the High Plains Book Award. She is on the faculty of the Mile High M.F.A. in creative writing at Regis University in Denver.