Review: A murder mystery with a twist of Greek tragedy and myth 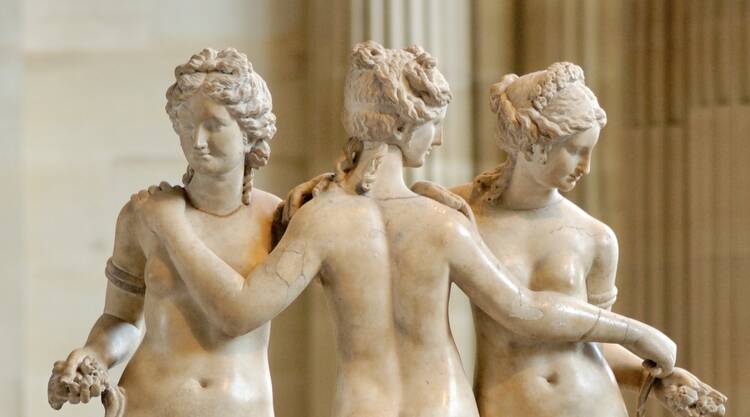 "The Three Graces," a Roman copy of a Hellenistic original. Restored in 1609 by Nicolas Cordier. (Wikimedia Commons)

Sigmund Freud is supposed to have said that there is no such thing as an accident. We behave in certain ways—often toxic or destructive ways—whose origins we are only dimly aware of. We are, ultimately, inscrutable to ourselves. That is at least one of the reasons why people like Mariana, the psychotherapist protagonist of Alex Michaelides’s The Maidens, stays employed.

Of course, as one character points out, a psychotherapist is, etymologically speaking, a “healer of souls,” and it is Mariana’s soul that is in need of repair first of all. Her impossibly perfect partner, Sebastian, has drowned off the coast of Naxos, and he and his death occupy almost all of her thoughts. Despite her best efforts, she cannot bring herself to discard his possessions. In the middle of her own grief and crisis, she also has others to think about: her clients, including the highly volatile Henry, and her orphaned niece, Zoe.

Other tragedies await Mariana. The body of Tara, a friend of Zoe’s at the University of Cambridge, is found slashed to ribbons in the woods. And so Mariana must return, with some trepidation, to the place where she and Sebastian met and fell hopelessly in love.

Occasional citations from Tennyson, Aristotle and others intensify the carefully built sense of tension in Alex Michaelides's new book.

What follows is a taut and diligently plotted detective story. Mariana, whose intuitions are predictably dismissed by the inspector handling the case, decides to remain in Cambridge and get to the bottom of things herself. Sebastian is painfully present to her in Cambridge, and at times he appears in the guise of a guardian angel, pressing Mariana on and giving her strength. (At one point, Mariana comes upon a statue of an angel and thinks it looks like Sebastian, which is really not to give the reader any credit at all.)

The murder, Mariana learns, is bound up with Greek tragedy and myth. And so it is fitting that at the center of the mystery around Tara’s untimely demise is Professor Edward Fosca, a dazzling American expatriate and classics professor. He is the kind of teacher whose lectures students line up to watch. Fosca has a loyal student clique of “maidens,” an exclusive study group whose parties, we are told (in low, conspiratorial tones), are pretty wild.

The Maidens unapologetically takes the tone of a thriller. Readers should not expect sumptuous and dreamlike evocations of an old university town fondly remembered, as in Evelyn Waugh’s Brideshead Revisited. Michaelides knows his genre (and his protagonist; he was himself trained as a psychotherapist), deftly controlling the flow of information and teasing us at times with snippets of story written on a typewriter by the ostensible villain.

Occasional citations from Tennyson, Aristotle (the author may have had the Poetics in mind at times while he was writing) and others intensify the book’s carefully built sense of tension. Hardly a word is wasted, let alone a chapter. And there is a smattering of memorable set-piece moments; a scene in which Mariana runs a group therapy session stands out in particular.

The author who most comes to mind while reading The Maidens is Dan Brown, a writer often dismissed as a mere entertainer, as if there were something wrong with entertainment.

Coincidences and clues accumulate in the plot like brushstrokes of paint on a canvas, coming together at a satisfying pace to form an image. But—and this is apt—one has the distinct impression that no one can truly be trusted, including the protagonist, who is naturally more aware than most of our inexhaustible capacity to hide inconvenient truths from ourselves. Michaelides has our heroine Mariana encounter both overtly sinister types and people who seem sinister by dint of not being sinister at all. Some of these characters do come across as obvious, shifty, red-herring types. But there is a real paranoia that colors The Maidens and mirrors Mariana’s mental landscape as she makes her way through Cambridge, asking question after question.

The novel has its flaws. Take the charismatic Professor Fosca, Mariana’s primary suspect. He is achingly handsome, charming, literate; he likes classical music. And, of course, he likes his meat rare. There are other well-worn tropes of commercial horror fiction. If Martin Amis is right in saying that good literature avoids cliché—well, you catch my drift. The inevitable twist, it has to be said, is entirely predictable, and from pretty early on. Michaelides also has that slightly trying habit of ending chapters with a single ominous sentence. But (I’m ashamed to say) it succeeds in making the reader feel compelled—even obliged—to read on. Clichéd or not, Michaelides knows how storytelling works.

A defense of learning Latin and Greek (Also: Why does it even need defending?)
Kevin Spinale

The plot’s superficial similarities to Donna Tartt’s The Secret History are so obvious that it would be dull to devote much time to them here, though it is perhaps worth acknowledging that they are only superficial; in fact, the two books have very little of real significance in common. The author who most comes to mind while reading The Maidens is Dan Brown, a writer often dismissed as a mere entertainer, as if there were something wrong with entertainment. But Michaelides imbues this story with an almost palpable atmosphere of uncertainty, the discomfiting sense that one is not being told the whole story.

The Maidens is entertaining as well as readable in a single sitting, which is the best way to enjoy a book of this kind. Take it all in all and on its own terms, and it will prove a very welcome addition to the genre: a well-wrought, satisfying, psychological detective tale begging on every page to be adapted for the screen—something that is indeed already in the works.

This article also appeared in print, under the headline “Tales Ancient and New,” in the November 2021, issue. 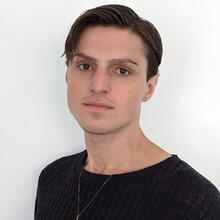 Harry Readhead is a writer and editor from London. He writes about politics and literature for titles like The Guardian, the New Statesman and the Times Literary Supplement.

@henry_readhead
Show Comments ()
Join the conversation: Login or create an account
Before you can comment, you need to update your profile to include your first and last name, as required in our comments policy. Then reload this page and you'll be set up for commenting. Update your profile