Review: In Patricia Engel’s ‘Infinite Country,’ a family grapples with borders and belonging 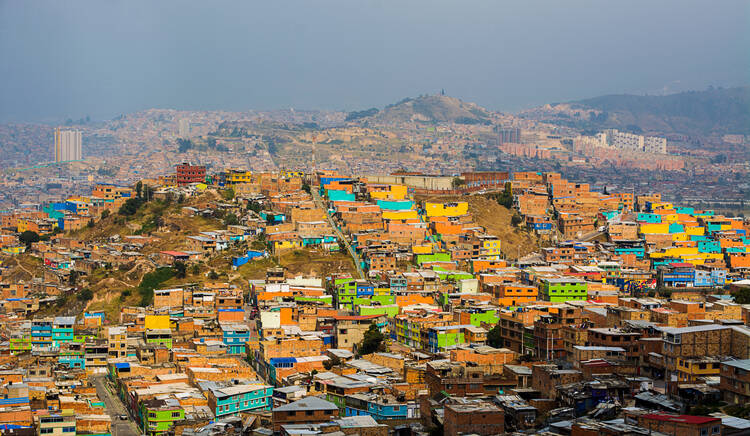 A neighborhood in Bogotá, Colombia. (iStock)

The Colombian-American novelist Patricia Engel’s gripping fourth book, Infinite Country,begins with an arresting line: “It was her idea to tie up the nun.” Fifteen-year-old Talia is responsible for this plan, the initial step in her plot to escape a youth prison school in the Andes, north of her hometown, Bogotá. Talia is a first-time offender who witnessed a young man burn a kitten alive and reacted by throwing hot oil in his face. “Talia,” Engel writes, “was impatient as thunder.”

At this state facility, “the lay staff reminded the sisters to aim for secularity, but on those missioned mountains, the nuns ran things as they pleased.” The nuns believe Talia’s “desire for justice” provoked her crime, and they consider her reformable. “The nuns were always scavenging for remorse,” Talia thinks. Although Talia will soon complete her sentence, she is determined to fly to the United States in one week on a ticket her mother Elena had purchased. Because she lacked child care, Elena had sent Talia to Colombia as a baby. Talia hasn’t seen her mother or older siblings since and hasn’t disclosed her crime to them. Talia’s father Mauro, who was deported from the United States and raised Talia in Bogotá, is complicit. Talia is an American citizen, and the promise of her status lures her to take brash risks as she breaks out of prison, journeys through the hills and hitchhikes south.

While Talia makes her getaway, Engel unwinds her family’s story and depicts in distilled, propulsive prose how they ended up scattered across nations. The American dream exerts a magnetic pull in this novel. When Mauro and Elena have their first daughter, Karina, they decide to leave the violence and low-paying jobs of Bogatá and apply for tourist visas to the United States. Elena, less enthusiastic about the move, often longs to return home. “What was it about this country that kept everyone hostage to its fantasy?” Elena wonders. After their third child is born, Mauro is caught in a raid and deported. “With the apparent logic that removing fathers is the most efficient method for undoing a family,” Engel writes, “the officers targeted men more often than women.”

Elena is a devout Catholic, but as her miseries—including a nurse’s encouragement to undergo sterilization and a boss who rapes her, knowing she can’t report the crime—as a single, undocumented mother are compounded, her faith wavers. “Elena,” Engel writes, “was uneasy with how the nurse spoke of her babies as burdens. She never thought of them that way. In Colombia people said a baby arrives with a loaf of bread under its arm. Where four eat, so can five.”

Meanwhile, Karina grows up a brilliant student, becoming embittered about opportunities that her legal status denies her. She is her mother’s interpreter, and she shields Elena from upsetting calls from school. As high school draws to a close, Karina nears the limits of what she can achieve without U.S. citizenship, but she rejects the labels that are applied to her legally and socially. “I’ve had borders drawn around me all my life,” she says, “but I refuse to live as a bordered person.”

Engel writes in third-person limited voice, with the perspective in each chapter attached to one character. This seems an apt choice for this novel about a fractured family whose members never exactly know what the others are experiencing, thinking and feeling. Early in the book, the perspective rotates between Talia, Mauro and Elena; later in the book, Karina and the middle child, Fernando, have a say. Because of the family’s separation, different citizenship statuses and varied locations, no character can fully understand the others, and they keep secrets from each other as they gauge what the others can handle knowing. Different members of the family suffer beatings, panic attacks, racist taunts, abuse and imprisonment, but don’t feel they can reach out to each other for help; their loved ones’ burdens are already so great.

Elena is a devout Catholic, but as her miseries are compounded, her faith wavers.

Engel depicts how the vicissitudes of the immigration system don’t just separate members of a family physically; they also create an emotional rift. This narrative structure puts the reader in the position of being the characters’ confessor. The reader alone knows all their secrets and dreams. As the characters in Colombia yearn for the United States and the characters in the United States long for Colombia, the benefits and failings of both countries are revealed.

Elena, who has struggled so much as an undocumented person in America, has a beautiful insight about the nature of happiness in the two countries: “There was an alegría inherent to Colombians, optimism even through tears, but never the kind of self-interrogation of ‘happiness’ she observed in the north, the way people constantly asked themselves if they were content as if it were their main occupation in life. And what was happiness? Not selfish fulfillment, of this she was certain. That seemed like a recipe for the opposite. Joy was in the loving and caring of others.”

Engel suggests that an itch for the American style of happiness keeps the characters in this novel roving and restless, always seeking the next best place to be as each becomes “infected” by the American dream that, in her eyes, “was more like a sickness.”

This book is full of migration, as various members of the family move from Colombia to the United States and back again, and from place to place within the United States. Talia pursues her wild escape toward Bogotá, and Mauro, the one character who has been caught by immigration authorities so many times that he is compelled into stasis, drinks to forget his sorrows.

As Engel’s stylish, heartfelt novel takes as many swift turns as Talia does on the back of a motorcycle she’s talked her way onto, the idea that this family could ever be safely reunited begins to look improbable. But in the end, Engel chooses to bestow on her characters several miracles, perhaps betraying her own glimmer of belief in the tarnished American dream.

This article also appeared in print, under the headline “A Fractured Family's Quest,” in the August 2021, issue.