Review: Paul Farmer went to Africa to fight Ebola. He found a people devastated by war and racism. 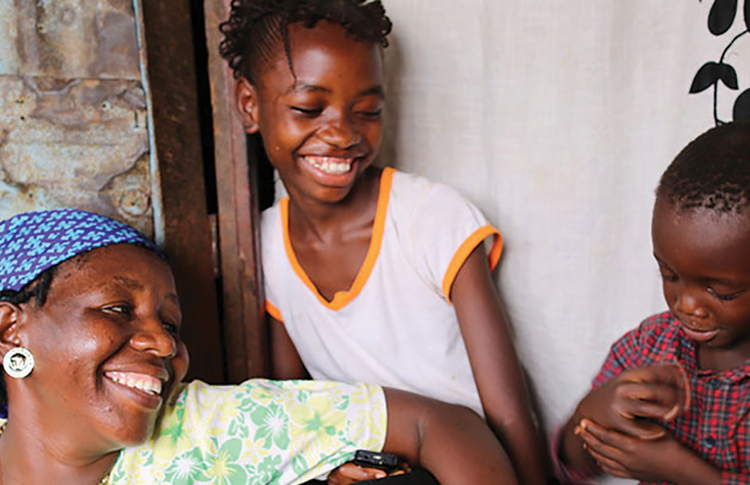 Yabom Koroma, an Ebola survivor, with her family at their home in the Mountain Court section of Freetown, Sierra Leone. (Photo by Rebecca E. Rollins /Partners In Health)

In 2002, while I was teaching a course on “HIV/AIDS and Ethics” with the Jesuit AIDS physician, Jon Fuller, at Weston Jesuit School of Theology, Paul Farmer came to my class. He brought along Tracy Kidder, who was then writing Mountains Beyond Mountains: The Quest of Dr. Paul Farmer, a Man Who Would Cure the World. Since then, I have thought of Farmer as remarkably familiar; he slips in without any need of recognition, a bit of an approachable everyman, completely interested and accessible to the other.

Two years later in Bangkok, at the XV International World AIDS Conference, I ran into any number of people whom I knew only by their name tags. Invariably they asked me, “Have you seen Paul?” I was struck by the question; I didn’t know these people, but I immediately knew whom they wanted. I remember thinking, “Who is known by their first name at a meeting of 25,000 public health experts?”

For years I have taught Farmer’s books in my courses. I have also introduced many of my undergraduate and graduate students to him and have brought him frequently to Boston College, where I teach. Where Paul is, others gather. They trust him.

In Fevers, Feuds, and Diamonds: Ebola and the Ravages of History, we follow Farmer as he goes in October 2014 with others from Partners in Health, the nonprofit global health organization he co-founded that is dedicated to providing a preferential option for the poor in health care, to West Africa—specifically to Sierra Leone, Liberia and Guinea. Farmer and his team went there to respond to the longest and largest Ebola epidemic in recorded history, one threatening to hemorrhage beyond the borders of the “Kissi triangle,” as the region is known. “To nurse the sick and to introduce supportive and critical care,” writes Farmer, “was what led us there in the first place.”

These are fighting words.

“To nurse the sick and to introduce supportive and critical care,” writes Paul Farmer in his new book, “was what led us there in the first place.”

In this astonishing book, Farmer reveals that he and his colleagues were fighting a public health battle against “sanitarians,” the term he uses to refer to those who were promoting a “control-over-care response,” one that emphasized containing the virus rather than caring for its victims. “There was too little T in the ETU,” he writes, describing the Ebola Treatment Unit in the region. Because of quarantine and isolation, Africans were again being denied care, and he stood with others in realizing that unless safe and effective care were added to the equation, their response would be a failure.

To help us realize what was at stake, Farmer introduces us to the actors. An anthropologist as well as a physician and a global health expert, he wants us to appreciate that with care, every American but one survived the virus. While Americans and Europeans were medevaced to safety and taken home for treatment and eventual recovery, in Sierra Leone, physicians like Humarr Khan and surgeons like Martin Salia struggled to provide care to those infected. Inevitably they too were brought low and killed by Ebola. The difference between those who lived and came home and those who died there was sufficient care. That care was needed in the desert.

The decision to go to the triangle is described in the second chapter, “Tough Calls.” In June 2014, while attending a surgery conference in Sierra Leone’s capital, Freetown, Farmer’s student, Dr. Bailor Barrie, desperately tries to draw Partners in Health into the emerging Ebola epidemic. Farmer resists and leaves, but he discovers in his eventual resolve to return that the matter-of-fact struggle on the horizon had no time for his anxiety. Instead, he resonates with the conviction of Dr. Rieux from Albert Camus’s The Plague: “The essential thing was to save the greatest possible number of persons from dying and being doomed to unending separation.”

To help us understand the magnitude of the epidemic, Farmer gives us not numbers but names. In “Ibrahim’s Second Chance,” he introduces us to Ibrahim Kamara, who “by the age of twenty-six had survived Ebola and the loss of more than twenty members of his family.” Kamara wants Farmer to hear his story. In listening, Farmer realizes that he must write this book as a witness to Kamara’s struggle to care, to provide, as he later writes, a lesson in “expert mercy.”

Kamara’s narrative of care and survival is the story of Sierra Leone. The spectacular epiphany of his resilient compassion is revealed in his interactions with 9-year-old Mariatu. Weighing only 29 pounds and after watching her mother and sister die of Ebola, she had battled Ebola herself in fragile silence for days. Finally, she whispers into Kamara’s ear. Once Farmer lets you hear what she said, you will be hooked forever.

“The Two Ordeals of Yabom” introduces us to Yabom Koroma. Her first ordeal is confronting the civil war in Sierra Leone; her second is surviving Ebola herself but losing her husband and sons and a dozen other family members. We meet the gaunt Koroma as she begins her recovery. Around the same time, the survivors program finds her a job as manager of an interim care center, where she ends up mothering 84 orphans. Yet again, the survivors become the needed caregivers.

Slavery, resource extraction, colonialism and warfare have left the people of the Kissi triangle “with a public health desert, which is why Ebola spread.”

In the middle of the book, Farmer goes deep into history to explain how colonial control suffocated the natural life out of the once enormously prosperous triangle of nations, leaving it a clinical desert. His account of slavery, resource-extraction, subjugation, social theft, the breakdown of local society and the resulting civil wars helps us see why Ebola had a chance to thrive in the triangle.

Ebola Orphans
From AP, CNS, RNS, Staff and other sources

Throughout, Farmer narrates the pervasive colonial disinterest in the health of and care for the local people. No matter his rage, he rarely vilifies by name the sanitarians he opposes, but he does offer the reader some examples from history of people who have gone against the grain and insisted on care as part of civilization, like Albert Schweitzer, W .E. B. Du Bois and Graham Greene.

There is much wisdom throughout this magisterial work, but the penultimate chapter, “How Ebola Kills” is a tour de force. There, in seven steps, Farmer indicts the sanitarians: After taking everything away from the people of the triangle, the withholding of care in the epidemic was the last move of racist colonialism.

Buy three copies of this book. Give the first to someone who wants to become a health care worker, to keep him or her from ever adopting the neoliberal call to emphasize controlling pandemics without caring for victims. Give the second to thank a Covid-19 health care worker who learned “expert mercy” in the face of mortal contagion. Keep the third copy for yourself. It is unforgettable.

This article also appeared in print, under the headline “Expert Mercy,” in the April 2021, issue.