Review: The Native American fight for survival in a white world 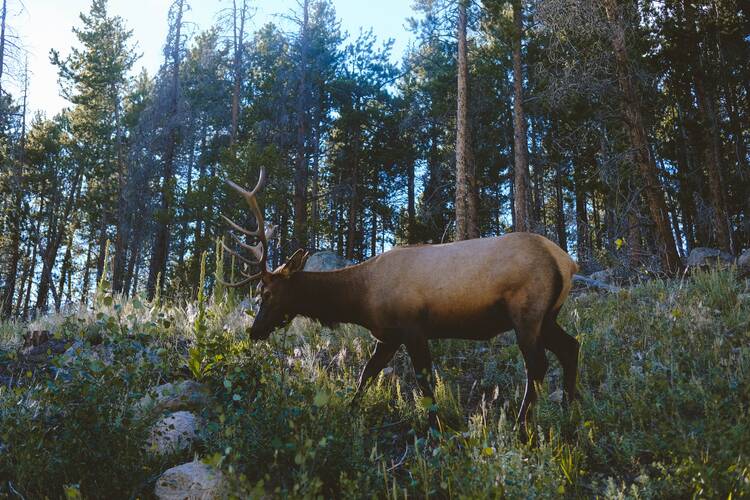 They thought they were lucky.

The antiheroes of Stephen Graham Jones’s revenge-horror novel, The Only Good Indians, are four Blackfeet men, childhood friends, who on the Saturday before Thanksgiving go poaching in the part of the forest set aside for tribal elders. They dub the trip the “Thanksgiving Classic,” and they are in the woods for fun, for friendship—but also out of economic need and shame. Winter is coming, and they haven’t managed to fill their freezers with big game. So they roll through the woods in the kind of broken-down truck Keith Secola would sing about. At the bottom of a cliff they spot the elk, spread out like a carpet of easy prey—and so begins a hunt that spans a decade and threatens not only their own lives, but the next generation.

Jones is the winner of multiple horror and fantasy awards, and his most recent novel has earned praise from Stephen King. He’s a King-like writer: punchy, down-to-earth, fond of closing out his chapters with sinister one-liners:

The ceiling of the living room. That spotlight.
It’s flickering yellow.

He finds horror in everyday objects and moments, the spinning blades of a ceiling fan or the marginalia scribbled in a paperback novel.

The Only Good Indians is a scary and well-told tale of four men being stalked by the spirit of an elk they had killed, returned from the dead as the shapeshifting Elk Head Woman. But it is also an exploration of guilt—how we respond to the slow, suppressed knowledge that we have done something truly wrong. And it is a portrayal of everyday Indian life. The characters are mostly married men who long for their bachelor days of good times and bad decisions. There is a sweat lodge and the cadences of traditional storytelling; there is the small town entanglement in which everybody is somebody’s son. And there is ever-present and deadly racism.

Jones writes terrific descriptions of basketball games on the reservation—even the sports-ignorant will be enthralled by the scenes of the basketball prodigy Denorah, daughter of one of the hunters, as Jones makes you feel the “spinning-away leather” under Denorah’s fingertips, the hula swivel of her hips, the discipline and the twisting muscles and the fury. These scenes show Denorah’s hope, her youthful certainty that talent and hard work will triumph, her ferocity and her willingness to listen when somebody has something worth saying. But they also show the world that does not respect her. At her games rival fans chant, “Indians, go home!”

Stephen Graham Jones finds horror in everyday objects and moments, the spinning blades of a ceiling fan or the marginalia scribbled in a paperback novel.

In many horror tales, the threatened protagonists call the police. They cannot help, because if they could help, it wouldn’t be horror, but they try. In The Only Good Indians, the scene in which the cops show up may be the book’s tensest moment. Investigating a dog bite, the cops come to see Lewis, one of the participants in the “Thanksgiving Classic.” We know Lewis as a nerdy married guy who has been having some disturbing visions lately. They see him as a brown criminal. They treat him with casual disdain: “Shouldn’t you be at work?” They know they can kill him. With one wrong gesture he can fill them with fear—and they can fill him with bullets. Lewis knows they are as much a threat to him as Elk Head Woman herself.

The title alone should make it clear that The Only Good Indians is about whether—or how—American Indians can survive in a white world. When one hunter describes a sweat lodge as “the safest place in the Indian world,” a younger man scoffs, “That means we’re only eighty percent probably going to die here, not ninety percent?” These are people who, when somebody mentions “your friend who…got shot,” have to ask, “Which one?” This is a world where a jagged, clumsy scar might be the sign of supernatural resurrection—or it might just mean that Indian women don’t always get the best doctors.

The book is divided into four sections, one per friend, three titled with Native riffs on horror—for example, “It Came From the Rez.” The Indians are hunters in this novel, but also prey; so far, so obvious. But “Blackfeet are to elk as white people are to Blackfeet” is an equation for the SAT. Jones is doing something subtler.

Stephen Graham Jones moves easily between legend and everyday life. He creates, from characters you might meet on any ordinary day, an extraordinary portrait of sacrifice and costly reconciliation.

Lewis’s wife is white, which suggests one layer of complexity. The novel hints at a better way of coexistence: a way to live in the natural world without being its enemy, for example. Even the narration suggests the hope of mutual understanding, as one section is told from the elk’s-eye view, the creatures who “move like blown smoke across the rolling prairie.” The Only Good Indians knows that this better way was lost long before the four friends decided to poach from the elders. Whether the better way was lost long before the white men came (say, on the day the man and woman left the Garden dressed in the skins of the dead creatures they had named), this novel doesn’t say. What it does concern is the nature of repentance necessary to restore the better way.

The four men’s guilt may seem disproportionate to the offense. There are more elk in the woods, right? Is it so bad to kill too many? But Jones shows us two nonhuman lives as microcosms: the created universe in the form of a pregnant elk. This is a classic horror trope, the seemingly small wrongdoing that spirals out into terrible consequences because it reflects a deeper disorder in the soul. (Is it so bad to eat an apple?) When the universe itself has been violated, what can put it right?

Nicholas Black Elk and the quest for justice
Gaby Guerrero

And here the novel’s emotional honesty meets its moral and even mystical tendencies. Horror is a good genre for exploring the hunger for justice, because justice requires a supernatural intervention—no mere human can fully repair the harm we do. All the Blackfeet characters here are people you will love, and although for a long time they remain “unprepared to face what [they’d] done,” it won’t surprise you that eventually they try to make things right.

They try generosity; it isn’t enough. They try violence. It fails—but not before several gut-wrenching scenes of gore and the destruction of love. They try returning to the old ways, pushing the guilt out through their pores in a sweat lodge. “All you ever want this deep into a sweat, it’s a bit of reprieve,” Jones writes. “But you’ve got to push through that.” But even the old ways do not restore the balance.

One person caught in the elk’s revenge tries to fix things by suffering, that razor edge where martyrdom becomes suicide. But neither guilt nor determination nor tradition are enough. At last an innocent willingly enters the unforgiving mathematics of justice. In this final sequence, Jones moves easily between legend and everyday life. He creates, from characters you might meet on any ordinary day, an extraordinary portrait of sacrifice and costly reconciliation.

Eve Tushnet is the author of Punishment: A Love Story.