Review: The significant questions of a creative life 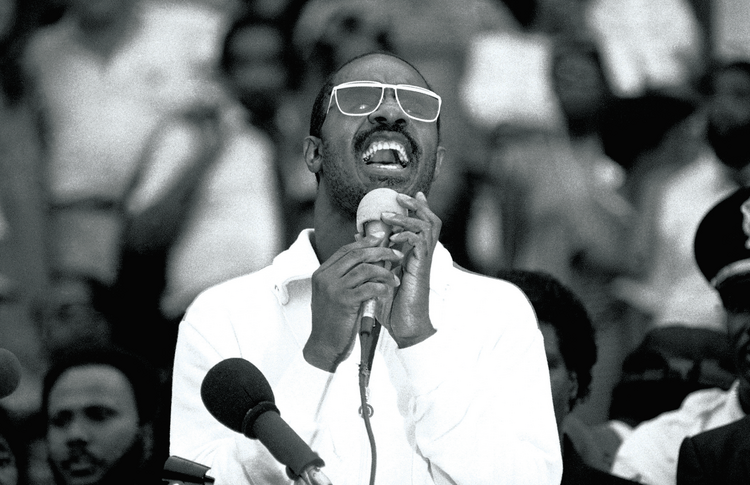 Stevie Wonder performs during a celebration of voting rights in Washington on Aug. 29, 1983. (AP Photo/Ira Schwarz)

Christopher Pramuk’s stated objective in The Artist Alive is to explore the significant questions of life in the creative musings and self-expression of a variety of artists in order to offer “tools for critical and contemplative appreciation.” Of course, this is not necessarily new, especially not to him. Given how I reveled in his 2013 book, Hope Sings So Beautiful: Graced Encounters Across the Color Line, I anticipated a deliberate and even prayerful approach to the subject at hand. He brings to this monograph that inviting disposition as well as several new strategies of exploration which lend an air of discovery to the subject matter.

Right away, Pramuk identifies himself as a translator. Using familiar methods of interpretation—whether David Tracy’s “classic” or Abraham Heschel’s notion of wonder or Charles Taylor’s notion of the social imaginary—he translates stories germane to the human experience that illuminate paths to the transcendent when communicated through the arts. He features the lives of artists (the world behind the text) as well as their creative self-expression (the world within the text) in order to summon the reader to consider musical, visual and literary muses for their own journeys of self-discovery and self-expression (the world in front of the text). He translates the biographies of Pink Floyd, Joni Mitchell and Bruce Springsteen in the haunting intonations of their arrangements, songs and voices; or the historical context of apartheid South Africa or pre-civil rights America; or post-9/11 America into the anthems of Peter Gabriel’s “Biko” or Billie Holiday’s “Strange Fruit.” To that end, he succeeds in making the book something that stirs the heart and piques the intellect.

Pramuk is also effective as a translator when he weaves autobiographical details about his own encounters with the works he studies into his reverence for them, all of which have affected his own wrestling with questions about being human. He tells us about different points in his life journey when the arts provided critical moments of consciousness-raising, whether as an adolescent or a father of adolescents, as a disciple of Jesus or one who teaches about him, as an adoring consumer of the arts or a reverent participant in the responses they evoke. This imbues the book with the intimacy of spiritual memoir. This was particularly evident in my favorite chapter, on Stevie Wonder’s “Songs in the Key of Life.”

In his translations of several songs in the key of his own life, Christopher Pramuk opened up much-needed space for my own self-critical wonder about the dynamics of racism in my own story.

In his translations of several songs from that album in the key of his own life, Pramuk opened up much-needed space for my own self-critical wonder about the dynamics of racism in my own story. In fact, Pramuk nudged me toward the album with his disquieting observation that “one cannot listen to Stevie Wonder or Kanye West records in the suburbs, pray for peace ‘down there’ in the city, and consider oneself sanctified.” So I wrote this review with Stevie Wonder playing in the background.

Initially, songs like “Village Ghetto Land” revealed to Pramuk a world “largely hidden” from the “suburban, middle-class, white America” of his youth. He returns to them as an adult for Wonder’s implicit critique of “the racially unconscious white listener embedded in his music” in order to see more clearly how perception can limit our capacity for love. Pramuk amplifies this conundrum with anecdotes from Wonder’s own coming to terms with his role in naming and condemning racism and with the limits of human love, even while insisting it was the path to a different way of being human together. And Pramuk shares his encounters with the world to which Wonder summons his listeners. “I’ve often wondered,” Pramuk says, “how strange, sad, and beautiful, that Stevie Wonder, a blind mind, would be teaching me how to see.”

How diversity in the classroom makes us better Catholics
Maureen O'Connell

Last, and perhaps as a reflection of his pedagogical expertise, Pramuk structures the book around what I like to call the “spoonful of sugar” approach to theological reflection. He arranges the chapters thematically, with the artistic piece—its story and the story of its creator, both told from a variety of perspectives—at the center. I found myself lured into familiar and often dense theological concepts in a wide range of theological genres: aesthetics, liturgy, political theology, ethics. He pairs artists, musicians, poets and filmmakers with theologians: the musician Bruce Cockburn with Walter Burghardt, S.J.; the novelist Jean Giono with Pope Francis; the iconographer William Hart McNichols with Henri Nouwen; the singer Bono with Walter Benjamin.

He also looks beyond the Christian tradition—to Jewish mysticism and the beginner’s mind of Buddhism—to help deepen encounters with this creativity. He implicitly defends this method with frequent references to theological insights his students have shared, often directly quoting them. He models for educators how to invite and then reverence the process of consciousness-raising and purposefulness that the arts can evoke and how to make space for it in our lives or in those of others.

For example, in his engagement with the Indigo Girls and the biblical Song of Songs in Chapter 7, he demonstrates the ways in which the arts are essential for liberating biblical interpretation for people who too often are wounded by narrow interpretations of the same. As an educator who often struggles to find Catholic resources that unequivocally affirm the lived experiences of L.G.B.T. students and consider both their suffering and visions of the “kin-dom” of God through the lens of justice, I found this chapter particularly helpful for doing what Pramuk prescribes at its end. “Perhaps the time has come for straight people of faith like myself to sit humbly and quietly before LGBTQ persons and ask them to share with us, face to face, stories from their own ‘book of experience.’”

At times, there were just too many theological luminaries (and not enough women among them). But when I found myself awash in the insight and intonations, I just surrendered to that sensation, because Pramuk is indeed a trustworthy curator and guide. Whole paragraphs read like meditations. And while his selections also reflect his generational self-understanding, he unapologetically acknowledges as much. I did wonder if the book might resonate a bit less with readers who are older or younger. But Pramuk’s appendices give readers, especially those who are educators, the confidence to invite and guide students through critical reflection on artistic expression that speaks to them, if not to us.

In short, Pramuk achieves the goals he sets out for himself in this book. The very act of reading it increased my capability to “linger long and lovingly with the real,” his articulation of spirituality. Given the overwhelming uncertainties these days that make figuring out the real—much less lingering with it lovingly—so difficult, this book is right on time.

This article also appeared in print, under the headline “The Human Experience,” in the Fall Literary Review 2020, issue.

Maureen H. O’Connell is an associate professor at La Salle University and a board member of Cranaleith Spiritual Center, both in Philadelphia, Pa.

@theoethicist
Provide feedback on this article
Join the conversation: Login or create an account
Before you can comment, you need to update your profile to include your first and last name, as required in our comments policy. Then reload this page and you'll be set up for commenting. Update your profile