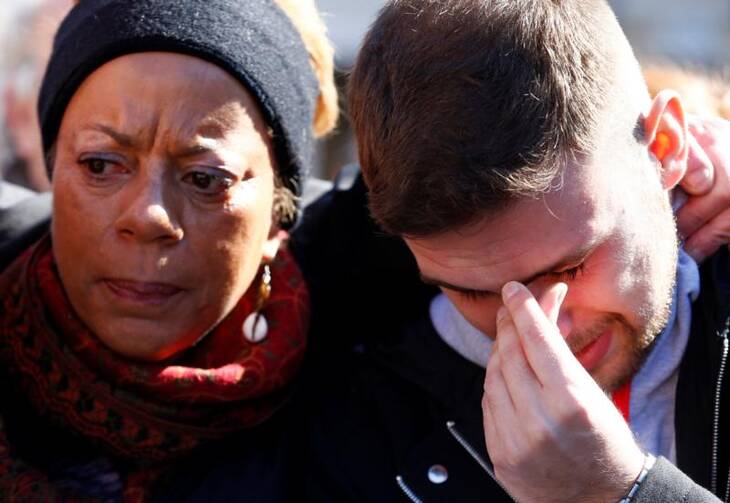 Sex abuse survivors Denise Buchanan and Alessandro Battaglia are pictured in front of St. Peter's Square at the Vatican on Feb. 24, 2019, on the final day of the Vatican's four-day meeting on the protection of minors in the church. (CNS photo/Yara Nardi, Reuters)

A Canadian pediatrician and woman religious who has worked on issues of sexual abuse for more than three decades, Nuala Kenny, S.C., offers her diagnoses and prescriptions for treating the “sick soul” and the “global septic shock in the Body of Christ” in Still Unhealed.

Kenny has been working in this area since she joined the one-of-its-kind, lay-led Archdiocesan Commission of Inquiry on Clergy Sexual Abuse in St. John’s, Newfoundland, in 1989. Still Unhealed follows on her earlier work, Healing the Church: Diagnosing and Treating the Clergy Sex Abuse Crisis (2012). Kenny brings to this study all the investigative curiosity that one would expect from a physician confounded by a patient’s failure to heal. In fact, in the case of treating the church, the physician seems far more interested in recovery than the patient itself does.

However, Kenny’s determination gives the reader hope. She makes us realize there are solutions to this deep crisis that need to be implemented with urgency.

While the sexual abuse crisis has been investigated by those inclined to either law or morality (with their interests in crime and sin, respectively), Kenny’s medical mind and heart presents us with the crisis as an illness. Concerned not only with the abuse itself and the insensitive banality of the hierarchy’s responses, she focuses on the underlying ecclesial pathology that sustains the lethargy and resistance that has characterized much of the “hierarchicalism” (my term) that leaves the church impotent and compromised.

Nuala Kenny, a member of the Sisters of Charity of Halifax, reminds one of the authority that other doctors of the church, like Catherine of Siena and Teresa of Ávila, have had as they dealt forthrightly with scandal and leadership in the church.

Kenny finds the root of the sickness in the church’s agency—that is, the ecclesial leadership that is insufficient in its capacity to mend and recuperate but rather governs in ways that stave off the Holy Spirit’s attempts to animate and restore the body of Christ.

While occasionally consulting her colleague, the theologian David Deane, Kenny proposes, among other prescriptions: women and other lay cardinals (a proposal I have heartily endorsed); the elimination of mandatory celibacy for the priesthood; women deacons; greater lay oversight in matters of allegations and accountability; a more truthful sexual ethics; and, in the formation of priests and bishops, an appreciation for servant leadership and a respect for the obligation to follow one’s conscience.

Nuala Kenny, a member of the Sisters of Charity of Halifax, reminds one of the authority that other doctors of the church, like Catherine of Siena and Teresa of Ávila, have had as they dealt forthrightly with scandal and leadership in the church. A very wise read.