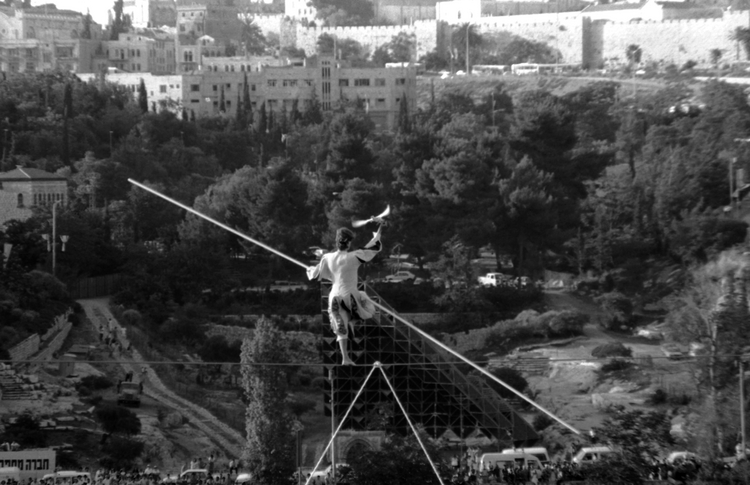 French high-wire artist Philippe Petit walks 200 feet on a tightrope between Jerusalem’s Arab and Jewish sectors to release a dove for peace in 1987 (AP).

Birds clearly mesmerize novelist Colum McCann. They are an enthralling mixture of delicateness and durability, fragility and resilience. In flight, they embody freedom. Though they linger in the air almost effortlessly, they have to come back to the ground or a crag in a rock to rest. Even the frigate bird, which appears in print and picture toward the beginning of McCann’s new novel, Apeirogon, will have to return to dry land at some point after gliding for months at a time while pillaging food from other birds. The sheer creaturely variety of birds, from ortolans to falcons, is mesmerizing.

In a core section of Let the Great World Spin, McCann’s National Book Award-winning novel set in New York in 1974, a woman shown circling the base of one of the Twin Towers and picking up the corpses of small birds who, dazed by the lights of the towers, had crashed headlong into them. As Philippe Petit—himself spritely and birdlike—approaches the towers to survey the area before his daring tightrope walk between them, the woman hands him a feather from a black-throated warbler. The feather will remind Petit of his own creaturely fragility, the consequence of his fall should he make a mistake.

Petit appears in Apeirogon as well, walking out over the Hinnom Valley in Jerusalem in May 1987. Petit sought to unite Israel and Palestine for a moment by his performance. In the middle of the wire, he intended to release a white dove—a pigeon really—as a symbol of peace. When freed from a pocket in his billowing costume while he was midway across the valley, the bird would not fly away. It first perched on Petit’s head, then on the end of his balancing bar. The bird almost upended Petit. It finally flew away to great cheers from the crowd. Petit righted himself and made it to the other side of the valley without falling. No one falls halfway.

Just before the two narrative sections at the heart of Apeirogon, McCann describes Constantin Brâncuśi’s famous bird sculptures as some of the most beautiful artworks of the 20th century. The sculptures depict the elongated body of a bird in flight, shorn of wings. McCann tells the novel’s readers that Brâncuśi’s sculptures were impounded by U.S. customs in the 1920s because they resembled machine-made artifacts and should have been taxed as such when they entered the United States for an art show. Shorn of wings, the sculptures looked like precursors to the body of an aeronautically advanced plane. As pieces of art, critics thought they “left far too much to the imagination.”

Just before the two narrative sections at the heart of Apeirogon, McCann describes Constantin Brâncuśi’s famous bird sculptures as some of the most beautiful artworks of the 20th century.

The core of Apeirogon is constructed like Brâncuśi’s bird sculptures. The novel’s body is wrought from two stories of fathers whose daughters die in savage acts of violence in Israel and Palestine. These two accounts of loss are the hitch and anchor for the coincidences and intersections of legend, war and history of the Levant.

The book’s two wings of 499 sections spreading out from the detailed accounts of the fathers are themselves extended outward in stories of deep irony, portraits of terror, tales of obfuscation and of human genius, intricate catalogs of creatures, genealogies of armaments and depictions of human goodness. The book’s two swaths of story and snapshot, one that counts up and one that counts down, on either side of the core become the fragile yet intricately beautiful wings that keep the two fathers, Rami and Bassam, aloft throughout this novel. The sections of story on either side fan out and cover the gamut of elemental human experience: music, sound, stone, water, time, family, homeland, bone, war and memory.

There is a wonderful symmetry and repetition in each of the wings conjoined to and anchored in the lives of Rami and Bassam—stories that these men tell together for two reasons: to honor the memory of their daughters, Smadar and Abir, and to work toward peace. Their daughters were likewise durable yet fragile creatures. They were caught in the utterly complex network of history and violence that is Israel and Palestine from the time of the British Mandate through today.

The book’s two wings extend outward in stories of deep irony, portraits of terror, tales of obfuscation and of human genius, intricate catalogs of creatures, genealogies of armaments and depictions of human goodness.

Smadar is the daughter of a prominent Israeli academic, Nurit, and Rami, a force of a man who describes himself as a seventh-generation Jerusalemite and a “graduate of the Holocaust.” Smadar was blown up in a suicide bombing at the intersection of Ben Hilel and Ben Yehuda Streets in Jerusalem in 1997. She was a few days short of her 14th birthday. Abir, the daughter of the Palestinians Salwa and Bassam, was killed by a rubber bullet fired from an Israeli patrol vehicle in 2007. She was on recess from school in the West Bank village of Anata and had just purchased a candy bracelet. She was 10 years old. The rubber bullet hit her in the back of her head.

If one reads Apeirogon in public—on a train or in an airport—there will be points during the novel when the reader might want to quickly lift his or her eyes up off the text to stop from weeping openly. The stories of these two girls and their families are powerful and heartbreaking. That is exactly what a good novel should do: move its readers and change them, help readers understand that the conflict in Israel and Palestine is not an aporia but an apeirogon—that is, a polygon with a “countably infinite number of sides.”

There seems to be a countably infinite number of characters and cameos in Apeirogon. Einstein and Freud, Borges and Mahmoud Darwish, Sinéad O’Connor and Senator George Mitchell all appear.

There seems to be a countably infinite number of characters and cameos in Apeirogon. Einstein and Freud, Borges and Mahmoud Darwish, Sinéad O’Connor and Senator George Mitchell all appear. But the most influential character may be a book and the nature of that book’s stories. In the 19th century, a British soldier and explorer, Sir Richard Francis Burton, who also appears in Borges’s “Aleph,” translated Arabian Nights into English. The 1,001 tales inspire the structure of McCann’s work.

Burton’s strange biography and journey to Mecca take up a few of the sections in the opening span of Apeirogon. On the other side of Rami and Bassam’s core stories, as McCann’s section numbers count downward, there is the tale of Wael Zuaiter’s assassination by the Mossad in Rome a few months after 11 Israeli Olympians were killed in Munich in 1972. Zuaiter was translating One Thousand and One Nights into Italian. As McCann writes, “Twelve of the bullets hit him in the head and chest. The thirteenth entered [his copy of One Thousand and One Nights] still in his pocket, ripped through the stories, and stopped when it hit the spine.”

Rami and Bassam’s experiences are the spine of McCann’s novel, and they are committed to stopping the violence that swirls around them.

There is a close symmetry in the grief of these two fathers who come from seemingly different worlds, certainly different sides of an intense conflict. The novel itself soars with symmetry and meaning because it is propelled by the elemental human experiences of love and hate, bellicosity and a yearning for peace.

This article also appeared in print, under the headline “The infinite perspectives of Colum McCann's fiction,” in the April 27, 2020, issue.