Judith Butler defends an aggressive nonviolence in her newest book 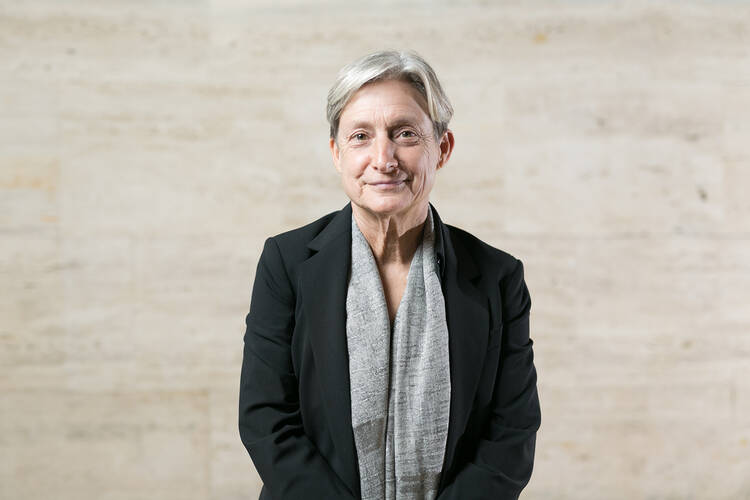 How do we define violence? Is war inevitable? What motivates us to preserve the life of someone else? Is nonviolence futile?

Questions like these appear frequently in The Force of Nonviolence: An Ethico-Political Bind, the latest work from the famed gender theorist and social philosopher Judith Butler. Arguing for a type of aggressive nonviolence, or “nonviolent forms of resistance [that] can and must be aggressively pursued,” Butler ties together a campaign against violence with a campaign against social inequality. More on that later.

After consulting a diverse array of philosophers, sociologists and psychoanalysts, Butler contends that through an understanding of interdependency—the way in which all people are connected to and dependent upon one another—we can understand the importance of preserving other’s lives. She describes her goal as presenting how nonviolence “emerges as a meaningful concept precisely when destruction is most likely or seems most certain.”

Butler does not argue her case for aggressive nonviolence, akin to what Albert Einstein termed “militant pacifism,” from an inherently religious or spiritual viewpoint. Her arguments move within a secular, perhaps more universally accessible, framework. However, her philosophical explorations can still be placed in dialogue with religious thought. (Gandhi is referenced several times.)

The Force of Nonviolenceby Judith Butler

As a work of philosophy, The Force of Nonviolence can make for challenging reading—long sentences, intersecting themes, difficult terminology. But this is to be expected, especially when a key issue is how “violence,” the book’s subject, eludes clear definition.

“First, the fact that ‘violence’ is used strategically to describe situations that are interpreted very differently suggests that violence is always interpreted,” writes Butler. She includes “social structures or systems” in her definition of violence, later commenting on how governments and the state can twist definitions of violence to defend acts of war and further oppress marginalized communities. In a footnote, she references the definition of the state by the 19th-century sociologist Max Weber: “a human community that (successfully) claims the monopoly of the legitimate use of physical force within a given territory.”

Important to Butler’s discussion of nonviolence is the concept of grievability, earlier explored in her 2009 book, Frames of War: When Is Life Grievable? For Butler, a life that is grievable is a life considered to have value; grievability also extends to the valued lives of the living.

But throughout her work, Butler demonstrates how racism and “war logics” decide the lives of some people to be more important than others (such as minority communities). Lives not considered grievable are rendered dispensable, cast out of society, labeled unworthy of defense. Butler calls on the Martinique-born political philosopher Frantz Fanon, who in Black Skin, White Masks describes the sense of being viewed as “the Other.”

“In the white world the man of color encounters difficulties in the development of his bodily schema. Consciousness of the body is solely a negating activity,” wrote Fanon. Therefore, Butler states that nonviolence must include a commitment to “radical equality,” where no lives are worth more than others.

A question remains: Are human beings inherently violent? Butler rejects the idea of a common state of human nature, and at any rate she notes that Thomas Hobbes did not regard such a state as an ideal. “The state of nature was for [Hobbes] a war, but not a war among states or existing authorities. Rather, it was a war waged by one sovereign individual against another—a war, we might add, of individuals who regarded themselves as sovereign,” she writes.

Butler also turns her attention to Sigmund Freud, a consistent presence in this book. Freud argued that pacifism is part of our “organic nature” and that through education, we can come to renounce “the destruction of organic life that war implies.”

Still, Butler is not opposed to violent intervention in some circumstances, and she does not regard nonviolence as “an absolute principle.” She argues that nonviolence is not the same as love and that we do not have to love others in order to adopt a pacifist position. This may be true, depending on one’s construction of love. It is surely not necessary, nor humanly possible, to have a deep, emotional love for all people, especially those whom we do not know.

But, if love is to mean “to will the good of the other,” in the Thomistic sense, then surely this would be a prerequisite for a nonviolent ethos grounded in “radical equality.” In Christian ethics, certainly an ethics that promotes nonviolence as a necessary response to the teachings of Christ, a radical love is not just an essential characteristic, but it is the method through which such nonviolence is made possible.

In addition to providing a scholarly, academic investigation and defense of nonviolence, Butler’s work also acts as a resource guide for pacifist thought. She does not shy away from addressing current political concerns, including xenophobic rhetoric that demonizes asylum seekers and promotes barriers between nations—institutional forms of violence, by way of Butler’s definition. While the book allows for disagreement, it can also be read as a call to action, an intellectual cri de coeur that, instead of accepting current reality, suggests a transformation of reality for the betterment of society.

This article also appeared in print, under the headline “A resource for pacifist thought,” in the March 16, 2020, issue.