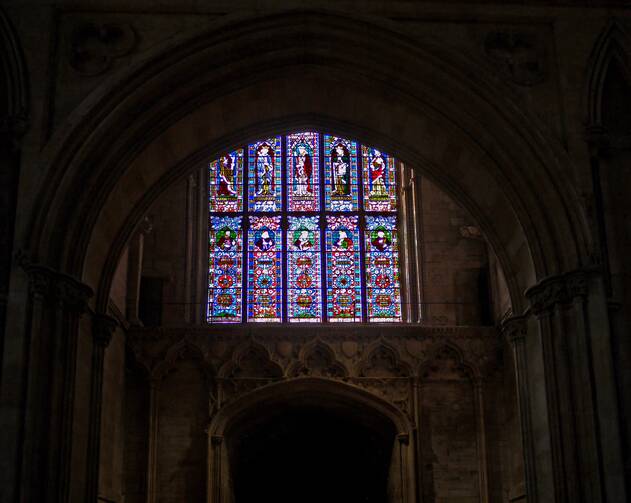 Photo by Brett Jordan on Unsplash

There is a poem in the midst of St. Peter’s B-List: Contemporary Poems Inspired by the Saints that moves me to tears whenever I read it. Sometimes I save it for the end of a day that has been a grind, a day that has been stuffed with overcrowded trains and the torpor of work. Then I read it, and my guts move. To read this poem is like a brisk, fierce clearing out of stagnant weather. “The Priesthood” by Mary Jean Nealon, begins with the following:

I thought I’d be a priest
or an Indian Saint like Kateri Tekakwitha–
she survived smallpox with blinded eyes and a disfigured face.
The book about her was the first thing I stole.

There is the shot, the clear out, the first heart’s movement in that simple word “stole.” The stole is that yoke-like thing that hangs from a priest’s neck and changes color with the liturgical seasons or feast days. And, what is more, this poet wants priesthood, but because it has been walled off from her, any attempt at priesthood or its function would be, for her, stealing. A theft. Taking that which is not hers. Taking something that does not belong to her. And this poet’s anguish moves the reader—me, a priest—due to the awfulness of the anguish. A poem, a good poem, helps one gain some insight into the interior life of another.

The poem builds in force as it continues. The thefts continue and suffering compounds. But, there is also the hope of St. Kateri and her holiness, and in the end, the poem stops my words. It shuts me up, and I sit in its meaning. I am changed by the compact meaning bundled in a short text. This is what a poem can do—expand our hearts by its ferocity.

This final quarter of 2019, the Catholic Book Club reads together St. Peter’s B-List. It is the first time in the last several years that the Catholic Book Club has endeavored to read poetry. Perhaps some regard “poetry”—the word or form is a put-off—as a nasty little inaccessible form of writing to be avoided. Perhaps many members of the Book Club still have scars from reading Alexander Pope or feel revulsion after having to stomach some lumpy, middle-aged English teacher passionately screaming, “Seize the day!” while telling you what Robert Frost’s “The Road Not Taken” really means. English teachers excel at telling their students what poems mean—perhaps this is why we rarely read poetry. Perhaps we think we need someone to tell us what it means.

The experiences of the poets penetrate our own and expands them, poets make our experiences richer—inflected in a different key.

The poetry in this collection is very different. We can read it without anyone telling us anything. We already know what it means—the feelings that the collection describe are ours: faith, laughter, guilt, anguish, hope, God’s presence, the presence of the saints in our lives—both the A-List saints like the Theresas, Thereses, and Teresas, and the Anthonys and the Assisi crowd, as well as the B-List saints like St. Walter and Dymphna, St. Spyridon and Gertrude of Nivelles. The experiences of the poets penetrate our own and expands them, poets make our experiences richer—inflected in a different key.

How about this one, “Conjugating” by Judith Valente:

I was the only public
that September at St. Aloysius

third desk from last
the alphabet outskirts of class

My body a stranger
in alien clothes:

buttoned to the neck.
In freshman art

describe what we saw
and some said summer

others said nature
I said the branches

Were the serpent tresses
of Medusa –

–we had read
Bulfinch’s Mythology

The bark the terrible
wide stem of her neck.

the crucifix above
the black board in Room 202.

from the girls who lived
in the stone house on Bentley

and Fairmont Avenues
summered at Avon-by-the-Sea

knew by heart the Apostles’ Creed
the Joyful, Sorrowful

and Glorious Mysteries
but I knew my mother

at that moment stood ankle
deep in red rubber boots

in a pool of gray water
hosing down cucumbers

at Wachsberg’s Pickle Works
so she could earn $1.05 an hour

and at three o’clock
when Sam Wachsberg blew

his plastic whistle, remove
the boots, pack up her lunch sack

and pickled onions
while the school kids sniffed

her clothes, laughed
behind her back.

memorized the Holy Sonnets
the symbols of the elements

mastered each declension
and conjugation:

[Join the Catholic Book Club discussion in our Facebook group.]

Not bad. Boy, it is nice to be free from the confines of punctuation. However, to avoid the risk of becoming that overbearing English teacher and telling you what these poems should mean for you, I will stop there. I ask you only to try on these poems. Many are extraordinarily funny. Many are heart-wrenching and render the reader silent. All are Catholic. All of them, I think, can contribute to prayer.

In this month of saints and souls, I ask that you give this collection a shot. Skim and read what you like. Graze, as one of my teachers likes to say. Reread what moves you. And in lieu of discussion questions, how about you share a thought about which ever poem stays with you and moves you most?