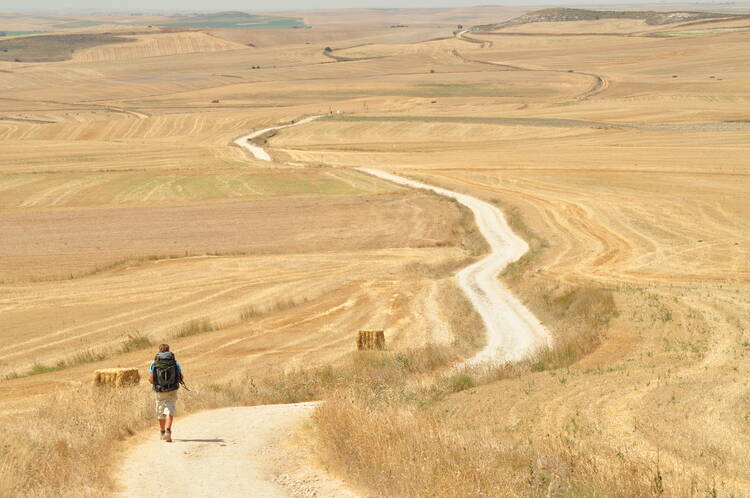 In 2016, I accidentally earned a plenary indulgence.

I was in Rome with a group of international journalists studying reporting on religion in turbulent political times and had wandered into St. Peter’s Square on my day off. It was the Year of Mercy, and a pilgrim who fulfilled all the qualifications would be granted a plenary indulgence by walking through the special Mercy Door of St. Peter’s while reciting prayers with a group.

A Pilgrimage to Eternityby Timothy Egan

I Googled the qualifications, did my best to check off the list and started the walk among a group that had traveled from Eastern Europe; but I found the heat and humidity of a Roman September too much to endure. The next day, I decided to skip the indulgence and just walk in to see the church again. However, the security guards waved me through the Mercy Door in front of a group of exhausted and sweaty pilgrims by mistake. I got the indulgence but hardly felt like a pilgrim because I had taken a cab.

The question of what a pilgrimage means in the modern day loops throughout Timothy Egan’s A Pilgrimage to Eternity. Many modern pilgrims, including nonbelievers, seekers and lapsed believers, still set out on the Camino de Santiago, which Egan acknowledges is what most people think of when they consider a pilgrimage. Egan, however, decides to undertake the longer and lesser-known Via Francigena, which takes him from England to Rome. He also gives himself a bit of an out on the 1,200-mile route, choosing to walk most of it but allowing himself “two wheels, four wheels, or train,” or any method that keeps him on the ground.

Like many American Catholics, Egan is “lapsed but listening.”

Egan has a Jesuit education and writes frequently about the church in his New York Times columns, but he freely admits that he drifted from the Catholic Church years ago. But this trip begins with a desire to meet Pope Francis, whom Egan sees as one of the few hopes the church has during its “worst crisis in half a millennium.” As the book unfolds, it becomes clear that Egan’s stake in that crisis is personal. His family has been directly damaged by the abuse crisis, and his own faith deteriorated as a result. But as another writer of Egan’s generation—Bruce Springsteen—recently put it, “once you’re a Catholic, you’re always a Catholic.” Egan is not so much God-haunted as he is Catholic-haunted.

Egan’s reading material during his pilgrimage speaks to the liminal space he occupies in his faith life. He brings along both St. Augustine and a book by the late Christopher Hitchens, whose snarky cynicism about religion seems to help Egan keep Augustine’s pious self-loathing in check. And Egan may be a lapsed Catholic, but he begins the book looking for a “stiff shot of no-bullshit spirituality.”

Like many American Catholics, Egan is “lapsed but listening,” and ready to “force the issue.” The pilgrimage will determine whether he is a believer or not.

Without spoiling the conclusion, I can tell you that Egan remains mostly in a liminal space at the end of the book, but as a Jesuit friend once told me, “if we didn’t have doubt, we wouldn’t be human.” The purpose of a pilgrimage may ultimately be to seek God, but more often, we meet ourselves and ultimately have to decide what kind of person we will be upon our return. Egan begins in England and in Chaucer’s Canterbury, the Medieval origin of the Via Francigena, but finds that The Canterbury Tales itself is too raunchy to be sold in the cathedral gift shop.

The purpose of a pilgrimage may ultimately be to seek God, but more often, we meet ourselves and ultimately have to decide what kind of person we will be upon our return.

Egan’s historical chops are on show throughout his journey. His well-regarded books on Irish and American history have in the past demonstrated his engagement with history as something we grapple with in our everyday lives, but in this book his personal history is interlaced with the journey into the past. His family’s deeply Catholic roots have been severed and starved by clergy abuse, and his long marriage to a Jewish woman has produced two children who, like many American millennials, are agnostic in temperament.

All three of these family members join him for jaunts along the way, providing some breaks in the narrative overview of Europe’s Christian history. Depending on a reader’s own interests, that overview may occasionally prove somewhat redundant, but Egan is an engaging narrator, aware of the American problems that he has dragged with him to Europe. An exchange with the abbot of a French monastery captures some of this:

“How are things in America?”

“What’s wrong with him?”

Although the presidency is not the topic of Egan’s pilgrimage, the crises the United States is facing at the border and in our churches are inescapable in Europe as well. Egan’s route and Europe alike are haunted by the Crusades and the Reformation, and the violence entrenched in European Catholic history is inescapable. European Catholics have for decades been drifting from the church. Like Egan, in a 2016 trip to Europe I saw soaring cathedrals with maybe a dozen people in the pews for Mass, heard the regular reports of immigrants drowning and dying trying to reach European shores and saw the nationalist tides beginning to rise. I too had the experience of walking into poorly attended church services and “feeling like a hemophiliac at a vampire convention,” but I regularly repeat that experience here in the United States as well.

So what is truly at stake when it comes to the question of faith today, and how can a pilgrimage answer the questions that keep arising on such a trip? Or, as Egan asks us and himself, “How can you believe in a savior whose message was peace and passive humility, when the professional promoters of that message were complicit in so much systematic horror?” It is a fair question, and one which no book can really hope to answer adequately. But a pilgrimage is ultimately more about questions than answers.

At the end of the book, Egan, crowded among thousands at a papal audience, looks around and sees not the Catholics who “want a museum for a religion” with “doctrine mortared to the statues,” but instead, a mostly nonwhite, mostly female crowd: the “future of the church, if it can keep from betraying them,” pilgrims drawn not by the grandeur of their surroundings but by “something else.” Egan does not name that thing, but it is the same thing that keeps him moving throughout the Via Francigena, the same thing that keeps the leaky ocean liner of the Catholic Church afloat and the same thing that motivates the current pope whose humility Egan admires. It’s called faith.

This article also appeared in print, under the headline “A Pilgrim Soul,” in the Fall Literary Review 2019, issue.