St. James and the road of life 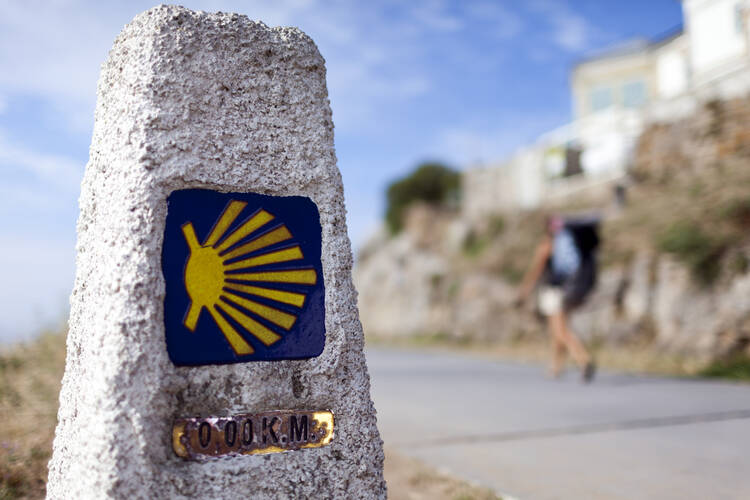 Tuesday, Oct. 3, was our first walk, a 10-mile, six-hour march with a band of 23 women and men, including two families from Singapore plus a mix of pilgrims from Ohio, Tennessee and Georgia, all welcomed by the New York Times writer Dan Barry and three professional Spanish guides.

A pilgrimage on the Camino de Santiago has historically been many things, including, in the Middle Ages, a penance for one’s sins. Last year, 277,915 athletes, bikers, families and friends made the Way of St. James a challenge, vacation or spiritual experience.

Last year, 277,915 athletes, bikers, families and friends made the Way of St. James a challenge, vacation or spiritual experience.

Our trip might be seen as an individual’s battle between his or her personal limitations and the 10- to 16-mile treks up and down the rocky hills of the Spanish countryside. The rolling mountains are often beautiful—from the oak and beech tree forests bordering the trails to the open grazing fields where sheep, goats, rams, cattle and even horses unknowingly bulk themselves up for the slaughterhouses. In each charming little town, the houses are white, the roofs are red and the streets are empty. The younger generation has fled to the cities, and the endless stream of pilgrims tramps through the narrow streets.

We started off in northern Spain, strolling the boardwalk of San Sebastián, then slipped into France at St.-Jean-Pied- de-Port, a beautiful, hilly old city with architecture that transports you to the 14th century. By the third day we were back in Spain checking out Ernest Hemingway’s pub and the starting line for the running of the bulls in Pamplona. For me, the traveling Jesuit, it is notable as the place where the young soldier Iñigo Loyola had his leg broken by a cannonball.

Why are we here? We are learning more about one another and ourselves with every passing day.

Why are we here? We are learning more about one another and ourselves with every passing day, listening to one another talk about everything from our own families to how countries and parts of countries are drawing away from one another. The average age of the group is in the early 50s; two of us are over the mid-70 mark—including a Catholic priest old enough to be the father or grandfather of everyone else.

One morning early in the trip, our group asked me to say Mass. Although I had no Bible, no Missal and no vestments, I made an outline summarizing the key prayers and preached a few words about the Good Samaritan.

Halfway through our march, hiking takes on a rhythm of its own, as the click-click-clack-clack of our walking poles sets a beat with our feet. I have been accustomed to fast walking in Manhattan, acting as if each man or woman ahead of me is an obstacle to progress. But here I slowly slip behind, joined only by a director whose job it is to subtly make sure I am all right.

We were gradually realizing how much we loved one another, no matter where we were from or what we did with our lives.

We have admired San Sebastián, Burgos, Pamplona, León and Astorga. We noticed the transformation from the medieval confession box, adapted to update the priest-penitent relationship. In one cubicle, the priest kept a stack of books to read while he waited for a penitent. In another, the exterior was the same, but the priest sat in the middle between two chairs with no barrier and faced the sinner sitting across from him. Finally, we saw five traditional confession boxes against the wall with their upper doors open, each priest looking outward, self-consciously smiling at the tourists who swept past.

Our bus dropped us off for a two-mile walk from the woods to Santiago de Compostela Cathedral, the reputed burial place of St. James. This was what we had come for, and we were not to be disappointed. Like others along the way, the town was celebrating a festival honoring its patron saint with street crowds, marching bands in red shirts, and bagpipe and drum clubs roaring away with melodies that sounded like football fight songs and Broadway tunes. Huge lights designed as seashells, the symbol of the pilgrimage, dangled over the narrow streets. They signified for us that we were gradually realizing how much we loved one another, no matter where we were from or what we did with our lives.

Why travel if you aren’t going to get a little lost?
Anthony R. Lusvardi, S.J.

On our last evening the cathedral offered a crowning experience. We sat on the side facing the altar, determined to witness something spectacular we had heard about but never seen—the flying censer.

The organ roared, and the celebrant and six concelebrants filed in with the cantor and six men in blazing red gowns. The sermon went 10 minutes, nearly everyone went to Communion, and then we sat patiently waiting. The men in red took their places, five holding the ends of huge ropes extending to the ceiling and connected to a huge glistening gold thurible, known as the Botafumeiro, which they lowered, fueled and lit, then hoisted to about 50 feet above the altar steps.

At the organ’s note, the censer began to swing back and forth, then farther out, and farther out again, until there it was, swooping down like a fighter plane in a dive, swooping out over and behind us, then sailing down and back, just missing the altar rail. Slowly, its work done, it came to rest.

Our 11-day tour having ended as well, we rested and, touched with grace, hugged one another and came home.

At roughly the same time as the author, my wife and I and a close friend were also in Santiago. We were part of a local parish pilgrimage starting in Lisbon and ending in Barcelona. The primary reason for the trip was to be in Fatima on October 13th. Fatima was a very overcast day but no dancing sun.

My personal main reason for going was to visit Santiago. I had seen the movie, "The Way", when it came out about 6 years ago and ever since wanted to go to Santiago. I also had read James Michener's book, Iberia, which is his only non fiction history. It is a travelogue/history and the last chapter is all about the Camino or the Way. Unfortunately the Portico de Gloria was off limits when we were in Santiago as it is being repaired. Almost 800 years of exposure to the air has made the sculptures start to crumble.

My guess is that close to a billion pilgrims have made the journey to Santiago or have traveled the Camino de Santiago in the last thousand years. Most today do it for non religious reasons. One of the interesting things is that the Camino helped inspire and finance the Reconquista. The Muslims supposedly had relics of Muhammed but the bones and legend of St. James gave the Christians even more inspiration.

The Camino brought the rich and the poor and the healthy as well as the sick. The rich would contribute to the Christian forces fighting the Muslims and the healthy were often knights who stayed to join the fight.

Spain has an interesting history and the country I like the most in Europe. So many interesting cities. I highly recommend that people consider visiting it because it is incredibly rich in culture and history and Barcelona tops it off as by far the most fun city in Europe. Barcelona is a city rich in culture and the home of Gaudi and his magnificent and unusual architecture. Google "Sagrada de Familla and 60 minutes." It is a history of the cathedral and the dedication of it by Pope Benedict. Look for the longest video on the list to get the full show.

The sign of the Camino is the scallop shell (see photo above) and a famous food dish is the Coquille st jacques or shell fish of St James. Variation of James are Jacob, Jacques, Diego and Santiago means St James.

PS - We were told to put our cameras away for Mass in the Santiago Cathedral but at the end everyone brought out their smartphones and video cameras to take video of the Botafumeiro, the famous thurible of Santiago de Compostela Cathedral. Google this too.

We also highly recommend Lisbon, the real surprise of the trip. Did you know that St. Anthony of Padua was not Italian but Portuguese and born in Lisbon.

Thanks for writing this Ray!

In the village of Conques, near the Abbey Church of St. Foy, we met up w a group of Dutch women who did the Camino in segments every year. Every year for the past 6 years they had spent a week walking, and getting picked up at the end of the day.

An historical architectural artifact -- the floor of the church at Conques is slightly sloped toward the west portal -- this allowed the "maintenance engineers" to flood the floor and send the detritus out after the "pellerins" had left!

Pilgrims to the Way of St. James came from as far north as Sweden and Poland. Under certain circumstances the feudal ties were relieved while the pilgrims made their journey.

The reason the botafumerio is so large and was swung to cover such a significant expanse of the great cathedral was "odor control" ......the Cathedral would be filled with a thousand unwashed pilgrims who had hiked for weeks.
Now of course that is less of a problem but the sight is nonetheless spectacular.

What was this for the author, a tourism trip? No mention of God, spirituality or the soul. What a waste of column space.