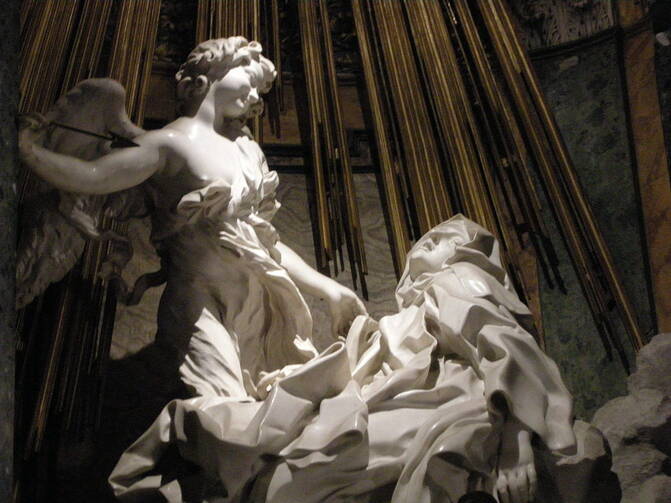 The Life of Saint Teresa of Ávila is termed an “autohagiography,” a self-justification of saintliness, by Carlos Eire, a professor of history and religious studies at Yale University. Titled El Libro de la Vida by its first publisher, it was written at the command of the Spanish Inquisition, which required proof of the sacred attributes of a sickly nun in 16th-century Spain who also experienced seizures and trances.

The Life of Saint Teresa of Ávilaby Carlos Eire

Eire offers empathetic details of how Teresa was born into a family that had converted from Judaism, like her contemporary St. John of the Cross. The legends of both conversos include stories of them levitating involuntarily as a sign of divine intervention. Artworks often show them together, hovering in the air.

After one vision, Teresa recounted how a handsome angel pierced her heart with a flaming lance, causing both pain and rapture. The baroque sculptor Gian Lorenzo Bernini’s “Ecstasy of Saint Teresa” in the Church of Santa Maria della Vittoria in Rome is “at once very faithful to Teresa’s text and also highly imaginative and metaphorical. She is not anticipating a painful wounding; she is already enraptured,” Eire observes.

Expressing this rapture, Teresa communicated pride in authorship and her literary abilities. “She really loved writing, and excelled at it,” Eire reminds us. She was also aware of her singular status as a recipient of holy attentions and therefore as one permitted (despite lifelong ailments) to establish convents and urge other Spanish conversos to a stricter Catholic piety.

With some irony, St. Teresa was deemed a quintessentially Spanish saint centuries later by the fascist government of Generalissimo Francisco Franco, who was presumably ignorant of her origins.

With some irony, Teresa was deemed a quintessentially Spanish saint centuries later by the fascist government of Generalissimo Francisco Franco, who was presumably ignorant of her origins. Had her family’s converso identity been known during her lifetime, she never would have been admitted to a convent and probably would not have been canonized so promptly.

As Eire notes, Teresa’s analytical mind when reflecting on mental prayer and mystical theology overshadows her potentially inflammatory words about confessors: “I do not fear Satan half so much as I fear those who fear him.” Eire looks to the larger significance of The Life’s “audacious, unrestrained optimism about the human potential for love and divinization, and its affirmation of the ultimate triumph of good over evil.” Small wonder that later writers, from Francis de Sales, Vincent de Paul and Richard Crashaw to George Eliot, Thomas Hardy and Gertrude Stein, were captivated by this powerful and delightful autohagiography.

This article also appeared in print, under the headline “Saintly optimism,” in the September 30, 2019, issue.