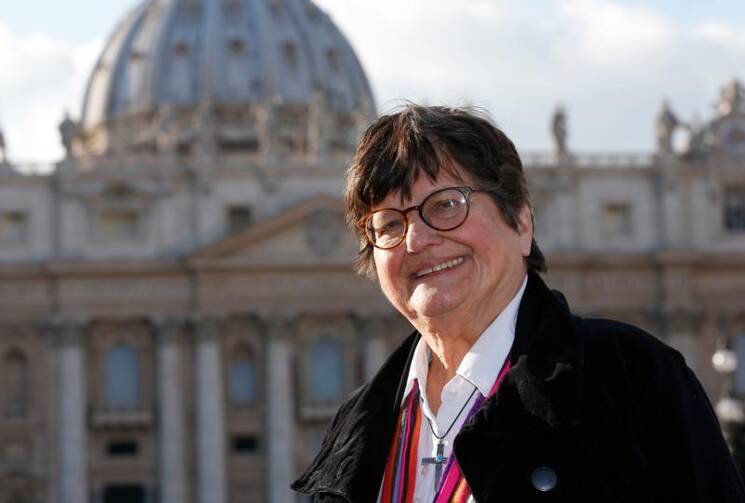 Helen Prejean, C.S.J., is best known for her work against the death penalty, but her new memoir, River of Fire, tells the story of the woman she was before she ever set foot on death row. The book leaves off, literally, where her famous memoir Dead Man Walking begins. The last sentence of River of Fire is the opening line of Dead Man Walking: “When Chava Colon from the Prison Coalition asks me one January day in 1982 to become a pen pal to a death-row inmate, I say, Sure.”

That pen pal was Patrick Sonnier, whose correspondence with Sister Prejean would lead to her accompanying him to the execution chamber at the Louisiana State Penitentiary in Angola, the nation’s largest maximum-security prison. Mr. Sonnier was put to death in the electric chair with Sister Prejean looking on. Sr. Prejean vomited, and then resolved to spend her life fighting state-sanctioned executions.

The magnitude of this resolution might surprise even longtime followers of the activist sister. It seems almost impossible to imagine Sister Prejean as anything but the fiery, outspoken woman who has spent decades addressing structural inequality with barbed statements like, “Capital punishment means those without the capital get the punishment.” But in River of Fire, Sister Prejean explains that it was a long road from her parents’ Louisiana estate, Goodwood, where the family employed black household servants, to St. Thomas Housing Projects in New Orleans and the death chambers of Angola.

Sister Prejean describes her childhood at Goodwood, near Baton Rouge, with humor and fondness while lovingly chiding her past self for her ignorance, particularly of racial injustices. Storytelling is the Louisiana vernacular, and it comes naturally to Sister Prejean. She details her mother’s piety by explaining how when her brother was sick, her mother drew crosses on his skin with holy water. She details her own internalized racism by recounting how she bristled when her classmates called her “blackie,” or when they used the most offensive racial slur when she returned from summer break with a tan.

It seems almost impossible to imagine Sister Helen Prejean as anything but the fiery, outspoken woman who has spent decades addressing structural inequality.

Soon, though, young Helen leaves Goodwood behind to become Sister Louis Augustine, a headstrong novice trying (and often failing) to fit into her 1950s-style novitiate with its silent meals, early morning prayers, ill-fitting habits and ban on “particular friendships.” It is in this nearly silent world that Sister Prejean’s sassy and self-deprecating internal monologue shines. After complaining about a novice who sits behind her in chapel and annoys her by sighing and clicking her fingernails together, she says:

At our weekly conference, our novice mistress, Mother Noemi, talks to us about putting up with one another’s faults and foibles. Now, there’s a new nun word, foible, part of a whole new lexicon I’m learning…a quaint little word if there ever was one. I’ve seen it written but never heard it used by real people in real conversations. Well, ol’ Click may well be the Foible Queen of the World. As far as I know, I don’t have too many foibles, but you can never be sure.

After a sigh of relief when her novitiate is over, Sister Prejean goes onto teach English and then work at a parish, both in ritzy, white neighborhoods in 1960s New Orleans. It is during the time of the Second Vatican Council, and Sister Prejean describes the thrill and tumult of its effects both in her parish and in her religious order. She is sent to study theology for the first time, where she falls in love with an intelligent young priest. She describes their seven-year affair with candor, explaining how they unsuccessfully tried to live a “third way” between religious and married life. (The two ultimately recommitted themselves to their religious vows.)

Following Vatican II, the Sisters of St. Joseph, like many other orders of women religious, began to wrestle with what kind of institute they wanted to be: Sister Prejean boils it down to “spiritual” versus “social justice”—and says she gave impassioned speeches in favor of the spiritual:

I’m up at the microphone at our meetings arguing that we’re nuns, first of all, not social workers, and our main job, our only real mission is to help people find God, and if people have God in their hearts, they’ll be able to conquer whatever oppresses them. What do you mean, “poor” people? Even Jesus said the poor would always be with us. I make these speeches with a whole lot of enthusiasm and sincerity. And defensiveness.

It is not until almost the end of the book that Sister Prejean describes her awakening. At a gathering of her religious order in 1980, one of the “social justice” sisters says, “Jesus preached good news to the poor.... Integral to that good news is that the poor are to be poor no longer.” She describes the statement as striking her like lightning, causing her to realize at once that in the four decades of her life, she had never known a single poor person, nor had she known any black person as an equal. She began to realize that her conception of herself as an apolitical person had been wrong, because supporting the status quo is an inherently political position.

For a full year after her lightning-strike realization, Sister Prejean struggles to put her newfound call to social justice into action. She writes with honesty about hatching lofty plans and failing to implement them until a member of her community delivers a stinging critique: “Barbara Miller stood up and challenged me to live and work among poor people myself before I try to inspire young people to work for justice. How can I teach them what I don’t live?” In the last chapter of River of Fire, Sr. Prejean packs her bags and moves into the city to work at Hope House, a ministry in the St. Thomas Housing Projects, where, she says, she finally learns to listen. In working with the people there, she sees firsthand and begins to understand generational poverty and racial bias in the criminal justice system.

Sister Prejean clearly sees River of Fire as her last book. She writes in the afterword that she is now 80 years old: “Mama and Daddy both died at age eighty-one, so I know my death can’t be far away.” And lest the reader assume that Sister Prejean’s work against the death penalty—the legacy that most will have in mind when reading River of Fire—is the sum total of her story, she spends the final pages of her afterword calling out the places where she sees continued injustices, particularly in the treatment of women and L.G.B.T. people in the church. She includes as an appendix a letter she wrote to Pope Francis calling “for the Catholic Church to fully respect the dignity of women,” in which she describes her dismay at being excluded from “certain opportunities of service” in the church, like preaching a homily and proclaiming the Gospel.

Although Sister Prejean can count among her victories Pope Francis’ change to the Catechism of the Catholic Church in 2018 outlawing the death penalty, support for the practice is ramping up again in the United States. Just last month, U.S. Attorney General William Barr directed the Bureau of Prisons to resume federal executions in the United States after nearly two decades. Sister Prejean was fighting capital punishment back then, and she is ready to continue doing so now.

This article also appeared in print, under the headline “The story of a passionate soul,” in the September 16, 2019, issue.