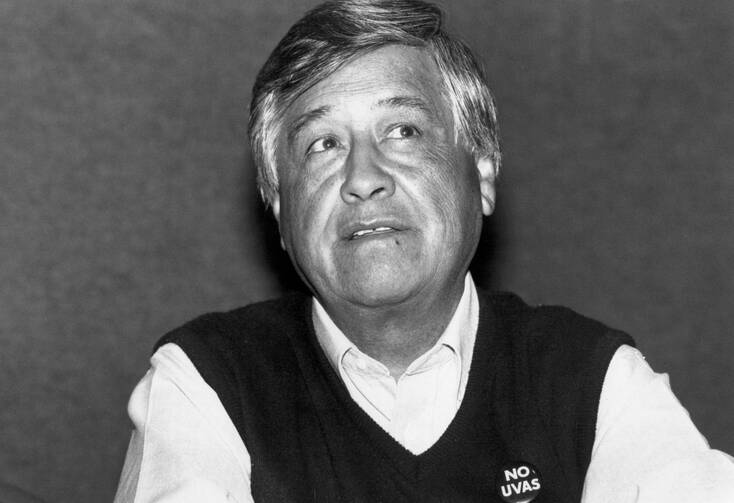 Cesar Chavez, who co-founded the United Farm Workers union in 1962, is pictured in an undated photo. Chavez, who died in 1993, began grass-roots organizing in the 1950s while working in the fruit and vegetable fields of California and defined the farmworker union movement. (CNS file photo)

The first chapter of Can I Get a Witness? is about Cesar Chavez. The first paragraph of that chapter paints a picture of Chavez—diminutive, chestnut-skinned, “handsome but forgettable.”. Here is how that paragraph closes: “That he would organize the first farmworkers union in a struggle for justice that took on the industry of agribusiness scarcely seemed possible.” I was crying by the time I finished reading those words. It was not the last time I would cry while reading the excellent, edifying essays that Charles Marsh, Shea Tuttle and Daniel P. Rhodes have collected for us in this volume.

Can I Get a Witness?by Charles Marsh, Daniel P. Rhodes and Shea Tuttle (Eds.)

What they have done is gather a set of 13 stories, each a mini-biography of one of those great souls whose faith in Jesus inspired and necessitated and sustained their work toward a more righteous world. Each of these 13 were “peculiar people, dissidents, misfits.” The kind of people “who sing strange and beautiful songs of God’s peaceable kingdom.” It is the editors’ hope that today’s misfit-dissidents will learn something new, something applicable to today’s challenges, from the stories of Howard Thurman and Father John Ryan, of Mahalia Jackson and Dorothy Day. And they will.

You will, too, if you read it. Even if you already knew that it was Father Ryan who coined the phrase “a living wage” or that he played a key role in the passage of the first wage laws that explicitly protected women and children. But more than inspiring snippets of stories that can be pulled out like bon mots at a cocktail party—more even than tales of how fasting or pilgrimage served Cesar Chavez as spiritual tactics and might serve us as such again today—what you will learn from this book is how much you need stories of hope.

If our social activists seem strange, then they are only strange to the extent that they show how much you still hope for a place in that number. And that you still need reminders to hope for such a place.

You will read about how Ella Baker’s grandfather, who was himself a slave, purchased a portion of the land on which he had been enslaved and planted a garden on it. And how watching her grandfather till that soil helped Baker believe that, in author Nicole M. Flores’s words, “change doesn’t happen in an instant. Freedom is a habit, one requiring constant patience.” And you will be a little more patient in imitation of her.

You will read about how William Stringfellow’s devotion to Scripture led him not to withdraw, but to “love the world more readily.” And you will remember how, under the cancer-inducing smog of cynicism that so often covers us, you want that too.

And you will read about how David Dark, who writes glowingly—glowingly—about Father Daniel Berrigan, S.J., wept in his car after seeing the movie “The Mission” because it showed Christianity for what it really is: “a centuries-old witness of long-suffering love.” And you will find, as I did, that the tears on your own face are not so strange after all.

Or, if they are strange, then they are only strange to the extent that they show how much you still hope for a place in that number. And that you still need reminders to hope for such a place.

This article also appeared in print, under the headline “Great souls,” in the August 5, 2019, issue.

Patrick Gilger, S.J., is pursuing a Ph.D. in sociology at the New School for Social Research. He is America’s contributing editor for culture.