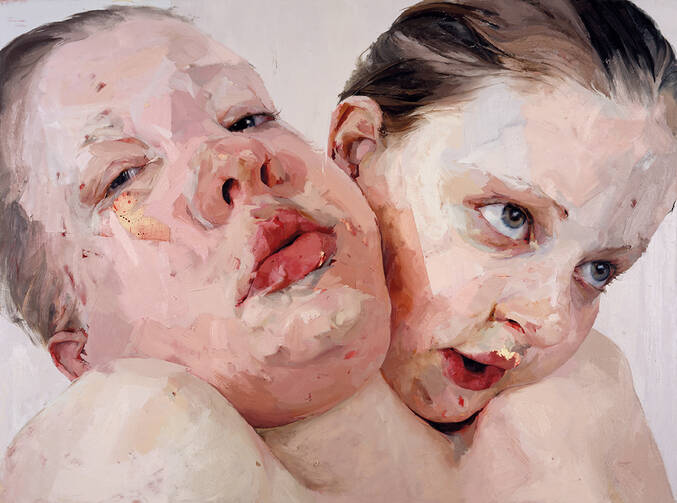 Mark Stevens, an art critic and Willem de Kooning scholar, titles his essay on the work of artist Jenny Saville with a famous line by de Kooning: “Flesh was the reason oil painting was invented.” If there is a single artist working today who truly gets flesh, it is Jenny Saville.

Saville rose to rockstar status in the art world as a member of the Young British Artists. Charles Saatchi, a leading British art collector, purchased many works directly from her senior show at Glasgow College. She has since enjoyed an illustrious career. With the monograph, Jenny Saville, Rizzoli publishers have released what they are describing as her most definitive book. Alongside the 320 pages of plates depicting her work, the volume contains two essays (one by Stevens and another by Richard Calvocoressi), a chronology of her career and an engaging conversation between the artist and photographer Sally Mann.

The book, much like her paintings, is large in scale. Frankly, it is the largest book I own. The linen cover is dressed in a dust jacket, illustrated with a closely cropped painting of a face that bleeds off the page. The book cozily fits into a protective slipcase: “Jenny Saville” boldly printed in a black serif font on the plain white spine. It is a beautiful aesthetic object. But it also seems more than that: delicate, precious, special—like a sacred object.

Yes, its “specialness” comes in part from the quality and craftsmanship of its printing, and of course the way that the price tag reflects that quality. More than that, though, its sacredness comes from the content held within. Fundamentally it is a book about flesh: an assemblage of figurative paintings and drawings printed on beautiful lustre pages.

There is something for Catholics to grab on to in this meditation on flesh. John the Evangelist writes, “The word became flesh.” The Eucharist is the flesh and blood of Christ. Before the Apostle Thomas could believe, he had to feel Jesus’ wounds with his own hands. He reaches out and touches the flesh of the risen messiah in this Sunday’s Gospel reading. The Catholic imagination—or, more specifically, my Catholic imagination—is illuminated by this incarnational consciousness. A consciousness informed by the strange mystery of God who “was incarnate of the Virgin Mary, and became man.”

One word to describe Saville’s work is carnal. And some of her most affecting works are the self-portraits of her with her young children. Mark Stevens calls them mammalian, because “they remember, restore, and respect the animal link between mother and child that exists before words, a connection more ancient than humankind itself.” They are not totally novel: Saville is painting within a tradition. The works directly reference drawings of the Virgin and child by Leonardo da Vinci and other maternal archetypes from the canon.

Charcoal lines wisp around the plain of the page, creating figurative forms. A young child contorts his body moving around in his pregnant mother’s arms. In more rendered versions, Saville fills in with oil paint, fleshing out their bodies and bringing them to life. The warm tones contrast with the cool slick movements of the charcoal lines. It creates dynamic compositions that keep your eye moving.

The paintings affect us because we relate so deeply to them. They depict the most basic shared human experience: the relationship between an infant child and their mother. A relationship that I had, you had, and, our faith teaches us, Jesus had.

But Saville’s work is not explicitly Christian: It is not about Jesus. Her work is about the figure. These paintings are about how one human form relates to another. How the flesh of a child relates to that of his mother. And I think she gets it. Better yet, she helps me to understand it.

The paintings affect us because we relate so deeply to them.

Stevens writes of this body of work that “Saville always maintains Leonardo’s version of Mary, and she does not deface or caricature her as a postmodernist might… Saville wants to retain the expression of tenderness as part of her rendering of the maternal.” She has one major advantage over da Vinci: her lived experience as a woman and even more importantly a mother. And she paints this truth, tenderness and all.

These works, and the monograph they can be found in, are sacred not because they depict Jesus, but because they help us to understand him and his humanity. A humanity we share with him.

Ciaran Freeman is a Joseph A. O'Hare fellow at America.