Review: When giants roamed the earth 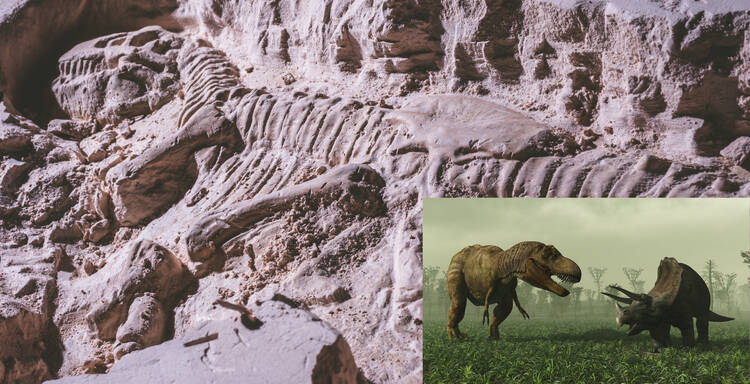 Learning about dinosaurs is one of life’s great wonders. Typically, childhood awe at plane-sized reptiles and flying carnivores fades into fantasy as abstract as dragons and Santa Claus, replaced by realities like grades, hobbies and crushes. And some strands of Christianity have discouraged discussion of dinosaurs as some sort of a negation of the seven days of creation in Genesis, a dark dream.

The Rise and Fall of the Dinosaursby Steve Brusatte

One reason it is hard to recharge the grandeur of dinosaurs is that there are relatively few great popular science books about the subject. The literature is largely scientific, drowning in weird names. It’s easy to lose readers in disquisitions on the transition from the Mesozoic to the Cenozoic. That’s why I was thrilled to discover Steve Brusatte’s The Rise and Fall of the Dinosaurs. Brusatte, a paleontologist at the University of Edinburgh, is a scientist who can write in plain English and communicates why, without explicitly saying so, dinosaurs should be part of any religious or reverent worldview.

Armed with enthusiasm, command of his material and a knack for analogy, Brusatte has written a book that incarnates dinosaurs with color, sound and fury. What a world, I thought over and over again reading this book. Brusatte is Catholic, and it’s hard not to read the vivid descriptions of dinosaurs patrolling the place where we live now as a scientist’s ode to creation. After all, it’s in Genesis that God made “every thing that creepeth upon the earth after his kind” and “saw that it was good.”

In Brusatte’s worldview, on a planet that is 4.5 billion years old and welcomed vertebrates only around half a billion years ago, dinosaurs are almost our brothers, fellow vertebrates, with teeth and skin and bones. “Dinosaurs aren’t just monsters or dragons; these were real animals, in the scheme of things quite closely related to us, and making that connection is a great thing,” he writes. In fact, our proto-primate ancestors developed teeth and ears like ours, “carving out an existence in the shadows of dinosaurs,” Brusatte said in an interview with America. Spend some time with that thought.

Overall, dinosaurs should be considered “incredible feats of evolution, well adapted to their environments, the rulers of their time,” Steve Brusatte writes.

Overall, dinosaurs should be considered “incredible feats of evolution, well adapted to their environments, the rulers of their time,” Brusatte writes. Far from being failures, he concludes, “they were evolutionary success stories.” Brusatte is also thoughtful about why it is important to study dinosaurs. “They give humans perspective, and humility,” he says. “Dinosaurs help us reckon with the great changes of the earth.”

There’s a good reason to tell this story now. After a post-World War II lull in paleontological discoveries, we are living, it turns out, in a great new age of dinosaur discovery. Another dinosaur is discovered every week. Computers, CAT scans and other technologies are expanding our understanding of what dinosaurs looked and sounded like, how they ate, moved and mated. Using fossilized feathers, scientists have figured out that dinosaurs were more feathered than previously thought and carried bright colors. And there is still so much to learn. We could still discover, for example, that dinosaurs used tools or were much smarter than we realized.

Brusatte knows paleontologists in China, Argentina and Poland and turns them into romantic heroes, shoe-leather scholars, detectives cracking murder cases. “Sometimes, you have one clue, and sometimes, you have ten,” he says. The best clues are fossils. And there are fossils everywhere, he writes, “in a limestone pit in Poland or maybe a bluff behind a Walmart, a dump pile of boulders at a construction site, or the rocky walls of a ripe landfill. If there are fossils to be found, then at least some swashbuckling (or stupid) paleontologist will brave whatever heat, cold, rain, snow, humidity, dust, wind, bug, stench, or war zone stands in the way.”

"If there are fossils to be found, then at least some swashbuckling (or stupid) paleontologist will brave whatever heat, cold, rain, snow, humidity, dust, wind, bug, stench, or war zone stands in the way."

The glamorization of contemporary paleontologists occasionally feels breathless; Brusatte’s enthusiasm for dinosaurs wins every time. He calls one collection of fossils “gorgeous”—“as suited for an art gallery as a natural history museum.”

Brusatte also describes the history and evolution of paleontology as a science and its early Indiana Jones-like practitioners. We spend time with characters like Barnum Brown, the 19th-century paleontologist who discovered the Tyrannosaurus rex. Reared in a tiny town in Kansas, he studied geology and “hunted fossils in the dead of summer in a full-length coat, made extra cash spying for governments and oil companies, and had such a fondness for the ladies that rumors of his tangled web of offspring are still whispered throughout the western American plains.”

While in Montana in 1902, Barnum discovered a pile of huge, mysterious bones. What he had discovered was “the James Dean of dinosaurs: it lived fast and died young.” A young T. rex put on five pounds a day, 1,700 pounds per year, growing into a 40-foot long, 10-foot-tall, seven-ton beast.

Brusatte’s descriptions of dinosaur geography paint useful contextual pictures. T. rex’s dominion, for example, “was the forest-covered coastal plains and river valleys of western North America.” “Like a Great White shark,” writes Brusatte, “Rex led with its noggin and used its clamp-strong jaws to grab its dinner, subdue it, kill it, and crunch through its flesh and guts and bones before swallowing. T. rex simply had to hunt headfirst, because its arms were pitifully tiny.” About those tiny arms: T. rex used them to “hold down struggling prey while the jaws did their bone-crunching thing. The arms were accessories to murder.”

“My imagination could never match what evolution created,” Steve Brusatte writes. Dinosaurs "were real: they were born, they grew, they moved, they left footprints, they died."

Our fascination with dinosaurs might have something to do with how long they reigned—150 million years of fights, feeding, sex, birth, death and, over and over, new kinds of life—and how quickly they fell, wiped out by a meteor that struck the planet 66 million years ago, which made “the atom bomb look like a Fourth of July cherry bomb.”

As an Italian Catholic teenager in suburban Chicago wrestling with life’s fundamental questions, “it was wonderful to learn that I belonged to a church that accepted evolution,” Brusatte says. It was “tragic,” he says, to see fundamentalist Christian friends “close their minds to a whole new way of looking as the world in a way that was undoubtedly true.” Thanks in part to books like Stephen Jay Gould’s Rocks of Ages: Science and Religion in the Fullness of Life, Brusatte says he resolved quickly to reconcile religion—“an important part of how I view the world”—and his love of dinosaurs.

And why shouldn’t religion embrace dinosaurs as one of this world’s glories? “If you’re a person of faith, you can find a whole lot of purpose” in evolution and the story of the dinosaurs, he says. “Everything is connected.” Just like theologians, scientists must use their imagination to recreate a world they can't see. “We’re not robots,” Brusatte says. “In order to come up with new ideas, you have to be observant, make connections and use your imagination.” Once you’ve conceived new ideas, “then you have to test them against reality.”

However, “my imagination could never match what evolution created,” he writes. But dinosaurs "were real: they were born, they grew, they moved, they left footprints, they died.”

This article also appeared in print, under the headline “When Giants Roamed,” in the Spring Literary Review 2019, issue.