The Catholic art of Frida Kahlo 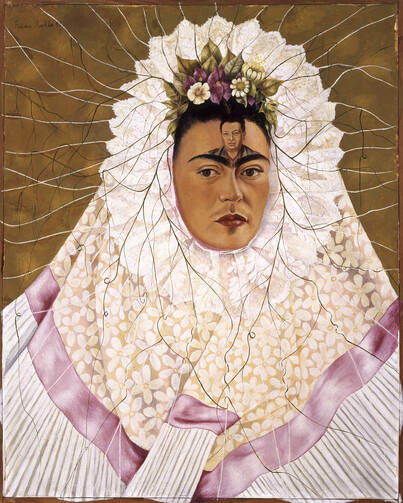 If one picture is worth 1000 words, how many is an object worth?

In recent years, projects like the British Museum’s “A History of the World in 100 Objects” have borne witness to the fact that every artifact has a story to tell. The Frida Kahlo exhibition currently at the Brooklyn Museum, “Appearances Can Be Deceiving,” features over 300 of them, and the resulting chatter within the mute galleries is loud. Like Frida herself, each of these objects—ranging from paintings to photographs, articles of clothing to jewelry, nail polish to lipstick tubes, corrective corsets to prosthetic limbs—cries out for the viewer’s attention, telling us some piece of news about Kahlo we had likely not known before: that she repurposed her medicine bottles to carry tequila; that she kept her famous unibrow and faint mustache intact to challenge the standards of beauty enforced on women by a patriarchal culture; that even as she insisted upon her independence as a woman and an artist she was obsessed with her husband Diego Rivera; that just as readily as she could dress in traditional Mexican women’s costume she could don a three-piece suit and tie and still manage to be beautiful.

Kahlo’s paintings, the vast majority of which are self-portraits, are rife with self-revelation.

There is a decided intimacy about these objects. They touch on crucial aspects of Kahlo’s private life, including her physical deformity (which she went to great lengths to disguise), her chronic pain (the result of a bus accident at age 18 that broke her spine and shattered her right leg—a leg that already been afflicted by childhood polio), and her frank sexuality (her devotion to her husband, her rage at his constant philandering and her own torrid love affairs with members of both genders). To walk among these objects is to take a tour through Kahlo’s psyche and, inevitably, to feel like an eavesdropper and a voyeur.

Yet, at the same time, one is aware that these are confidences Kahlo herself would not mind sharing. Her paintings, the vast majority of which are self-portraits, are rife with self-revelation, stripping away the facade of propriety to reveal the “real” Frida beneath the frippery, the bangles and bobbles, and the expertly applied makeup that decorate but don’t define her. As a result, the viewer experiences a kind of binocular vision of Kahlo—two distinct images, that of her private self and that of the carefully curated self she presented to the world, that gradually merge and meld into one.

For the Frida Kahlo fan, there is a sacred aura about this assemblage of objects, many of which have been borrowed from Kahlo’s home, the famed Casa Azul in Coyacán, Mexico City, a site of pilgrimage as the place where Frida was born, where she died, and where her remains now rest. These are relics belonging to St. Frida, canonized by millions of adoring devotees, a worldwide cult that has conferred on her unofficial status as patron saint of women artists. And an unlikely saint she is.

Kahlo, born to an a-religious German father and a devoutly Catholic Mexican mother, was raised Catholic but later rejected her religion. The photograph of her first Communion taken by her father, Guillermo Kahlo (a professional photographer whose remarkable work is featured in the exhibit), speaks volumes: Frida looks devout in her white dress and veil, but on the back of the photo she later scribbled a word which needs no translation, “Idiota!”

For the Frida Kahlo fan, there is a sacred aura about this assemblage of objects.

Despite her rejection of her childhood religion, however, Kahlo’s work is the product of a deeply Catholic imagination. The Catholic elements of Kahlo’s art and world view are evident in many ways, but chief among these is her reverence for the body, especially the broken body (as hers was) and its holiness despite its imperfection. In her paintings and sketches, Kahlo paints herself with frankness, self-knowledge and tenderness, qualities that are fully evident in “Las Apariencias Engañan” (“Appearances Can Be Deceiving”), the piece that serves as inspiration for the Brooklyn exhibit. In this revealing drawing, her dress, a voluminous skirt designed to hide her ruined body and corrective appliances—is transparent, allowing the viewer to see her in all her vulnerability. Her wounded leg bears a stream of blood trickling down from her pelvis, while her healthy leg is tattooed with blue butterflies; her cracked spine is represented with an iron bolt holding her together, and she wears one of the plaster corsets designed to keep her back straight.

There is an element of the monstrous here, as though Kahlo were an invention akin to Victor Frankenstein’s famed creation, an unlovely amalgam of flesh and technology. Yet this is a self with a sensitive soul, as well as a woman whose sexuality cannot be compromised by the decidedly un-erotic equipment that makes and keeps her whole. This is the inviolate self Kahlo paints, and it is also ecce homo—or ecce femina—the Woman of Sorrows who must endure the crucifixion of being human.

The inspiration for her art came from a variety of sources, one of which was the Catholic practice of ex-voto art, votive offerings to the saints or to God. These small paintings depict instances of human disaster—accidents, sudden sickness, death from disease, robbery, assault and murder—overseen by divine providence. Frida and her husband owned over 400 of these ex votos, which line the walls of Casa Azul. Largely the work of Mexican folk artists, each constitutes a kind of prayer. The figures are often depicted appealing for divine intervention to save them from death and suffering. Saints, angels, Christ, and God the Father appear in the sky, creating the image of a world in which the divine is in communication with and actively present in human affairs.

Suffering is a constant presence in Kahlo’s worlds, both the physical one she endured and the artistic one she created.

The paintings are very graphic and often gruesome in their depiction of agony and calamity, featuring gored, pierced, crushed and otherwise broken bodies, along with copious amounts of blood. Clearly Kahlo identified with the afflicted, given her own physical circumstances, and in them one can see traces of her own art. It has been noted that one of the ex votos she owned, depicting a woman being stabbed in her bed, is a source of inspiration for Kahlo’s graphic depiction of a murdered woman, “A Few Small Nips,” as well as her depiction of her own hemorrhaging body, the result of a miscarriage, in “Henry Ford Hospital.” Kahlo’s paintings differ from the ex votos in that the divine presence is absent, attesting perhaps to her atheism but also to her desire for belief in a world in which suffering might be redemptive.

Suffering is a constant presence in Kahlo’s worlds, both the physical one she endured and the artistic one she created, and it is also what binds them together. Many objects in the exhibition speak of that suffering, yet they also attest to the ways in which Kahlo’s art redeemed her pain. One of the most poignant artifacts in the exhibition is the prosthetic leg Frida wore after her leg had to be amputated—a practical piece of medical machinery from thigh to shin, and from shin to foot a beautifully decorated red wedge boot. Kahlo’s corrective corsets are also on display, both those made of leather and those cast in plaster. (In a tender gesture, Kahlo painted the latter, treating them as canvases and transforming symbols of ugliness in her life into objects of beauty.)

After the accident that crippled her, Frida spent months in confinement looking hard at herself in a mirror positioned over her bed, painting self-portrait after self-portrait. During this period she wrote: “I am not sick, I am broken. But I am happy to be alive as long as I can paint.” Kahlo’s moving confession is a reminder of other artists for whom illness served as a catalyst for the discovery and practice of their vocation, and who labored at their craft in the face of the limitations it imposed—among them Andy Warhol, Flannery O’Connor and Walker Percy. These artists, all of whom happen to be Catholic, also turned to art as means of creating beauty in the face of affliction, of telling the truth about suffering that only sufferers know, and of redeeming that suffering by pursuing their calling with religious fervor. They sought and found holiness in their art.

These eloquent objects in the exhibition serve to remind the viewer that, despite her rejection of her faith, the child in the Communion dress represents an enduring aspect of Frida Kahlo’s identity. Her Catholic formation is evident in her iconic self-portraits (some of which resemble actual icons), including those in which she wears the traditional Mexican Resplandor headdress, a garment made of starched veils that encircles her face like a halo; in her many visual allusions to the central events of the Christian story and Catholic lore, including the instruments of Christ’s passion and the sufferings of the saints; and in her insistence upon the beauty and sanctity of the body. Indeed, if the Brooklyn exhibition were to be renamed “A History of Frida in 300 Objects” (as it might easily be), viewers would find that many of those artifacts speak to an aspect of Kahlo that she was largely unconscious of, the lasting legacy of her Catholic imagination.

Correction, April 22: Due to an editing error, an earlier version of this review incorrectly referred to Frida Kahlo as Friday Kahlo.

Angela Alaimo O’Donnell teaches English literature at Fordham University and is the associate director of the Curran Center for American Catholic Studies.

Thank you. This will keep me thinking, including about things I have avoided think about. It does make me miss living in NYC and being able to go to exhibits like this one.