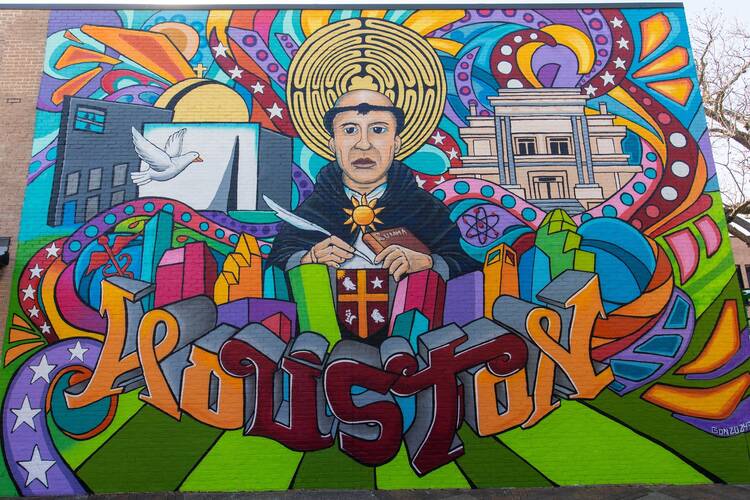 Growing up as a Mexican-American Catholic in Houston, I was always surrounded by images of the saints—or followed by them, you could say. I spent most of my childhood at my grandmother’s house, where the walls were lined with crucifixes and portraits of the Holy Family and St. Jude. Every free countertop was covered with statues of saints, Precious Moments figurines of priests, nuns and the baby Jesus and more statues of the Virgin of Guadalupe than I could count. (Though I did try counting them the last time I was at my grandma’s house. There were 18 images of Guadalupe.)

The college I attended in Houston, the University of St. Thomas, was also populated with these images of Jesus and the saints, including its namesake, St. Thomas Aquinas. One March day, five years after I graduated, a new image of St. Thomas came to tower over the campus life mall at the university in the form of a beautiful and vibrant 30-foot-tall graffiti mural.

Gonzo’s work includes the iconic “Houston is Inspired” mural that has become a landmark in downtown Houston.

The mural, which had a reveal celebration on March 21, was created by Mario Figueroa Jr., a native Houstonian whose art is featured across the city. His work includes the iconic “Houston is Inspired” mural that has become a landmark in downtown Houston. Figueroa, who goes by the name GONZO247 for his artwork, rendered St. Thomas, a 13th-century Italian Dominican friar and doctor of the church, behind an outline of the downtown Houston skyline and the name of the city. An abbreviation of the school, U.S.T., is highlighted in red script. The figure of St. Thomas is flanked on either side by drawings of the Chapel of St. Basil and of Link Lee Mansion, which houses the office of the university president. The saint’s halo resembles the walking labyrinth that is adjacent to the chapel, itself a replica of a labyrinth on the grounds of the cathedral in Chartres, France.

Chris Valka, C.S.B., a member of the Basilians, the French order that founded the school, and the university chaplain, said students and staff members at the university had always been interested in a mural. He said that the final design, along with the choice of artist to paint it, were great ways to highlight the bold moves the university was making.

One day when he was 11 or 12, he picked up a spray can, found a piece of plywood and started painting. After a few moments, he was sold.

Gonzo was familiar with the university and, as a Catholic, had even attended Mass on campus a few times but was unaware of all the space and symbols that made the university unique. “Before I started the project, [the administration] offered to give me a tour of the university, and as we walked through the entire space there were things that I hadn’t seen before that kind of jumped out at me,” he said in an interview with America, before the mural was completed. “The final mural will have these cool nods to the actual university and it will speak of St. Thomas and have kind of the feel of what you can experience while you’re there on the campus.”

The 46-year-old graffiti artist was first introduced to the art through rap. He discovered hip-hop culture through rap music and calls graffiti the “visual language of hip-hop.” He also remembers the instant he knew he wanted to be an artist. He was around 11 or 12 years old, messing around in his dad’s garage in Houston. He picked up a spray can, found a piece of plywood and started painting. After a few moments, he was sold.

“I realized that that one mural was so powerful that it really helped to pave the direction of the neighborhood and inspire a lot of kids to become artists.”

“When I grabbed my first can of spray paint and created something, I knew that this was what I wanted to do,” Gonzo said. “And I knew that spray paint was gonna be my medium of choice.”

Gonzo credits the public art he encountered as a kid for kickstarting his desire to keep creating art. Growing up on the East End neighborhood of Houston, a predominantly Hispanic area, he noticed the completion of a mural by local Houston artist Leo Tanguma. Tanguma’s mural, “The Rebirth of Our Nationality,” was completed in 1972 during the Chicano mural movement and shows multiple figures reaching for one another. The top of the mural reads “To become aware of our history is to become aware of our singularity.” (Tanguma chose Gonzo to help with the restoration of the mural in 2017.)

As he grew up, the mural became for him the identity and anchor of the neighborhood. “The scale of that production really left an impression on me. [I knew] that was the direction I wanted to go in life,” Gonzo said.

The mural is a part of the #BeYourBoldSelf campaign, aimed at highlighting the diversity and uniqueness of the university and its students.

“Thinking back, I realized that that one mural was so powerful that it really helped to pave the direction of the neighborhood and inspire a lot of kids to become artists,” he continued. “I figured if that one mural could do that for one neighborhood, what could two murals do? What would 100 murals do for the city of Houston. I saw there was a need for more public art at the time and the potential of what could happen if you had more access to art.”

Gonzo also believes in the positive impact public art can have in a local community when you take the time to engage with residents.

“When you [create] that kind of sentiment, then [residents] become the stewards of the art piece and the neighborhood starts to change in a positive way,” he said. “When you have a positive environment through art, people feel better mentally, and when you paint for the public and include them in the process, it resonates.”

The church’s positive relationship with the arts is something the university wanted to feature.

These same desires led Gonzo to the University of St. Thomas, where his sister worked and studied as a student, and to create his portrait of the tonsured, black-cloaked Aquinas.

“Houston is a city where murals, street art and graffiti art are an emerging presence,” Father Valka continued. “GONZO247 is certainly the best and a well-known artist in that scene, and so it was really a [great] opportunity to [have him be a] part of our campaign.”

Father Valka also mentioned how the church’s positive relationship with the arts is something the university wanted to feature. “It’s through art that we are often led into a deeper understanding of God,” Father Valka said.

The mural “is a great way to show that the university is committed to the community and the neighborhood,” Gonzo said. “Hopefully, this will be another awesome cog in the overall scheme of things that make Houston even that much better.”

Vivian Cabrera is an editorial assistant for digital media at America. Twitter: @icabrera05

Always be your bold self amidst this challenging world. I love this graffiti and the message behind it. Thanks to the man who made this, You make the world a beautiful place. | Chris of garage floor coating