Why paint the saints? An interview with Carlos Vega 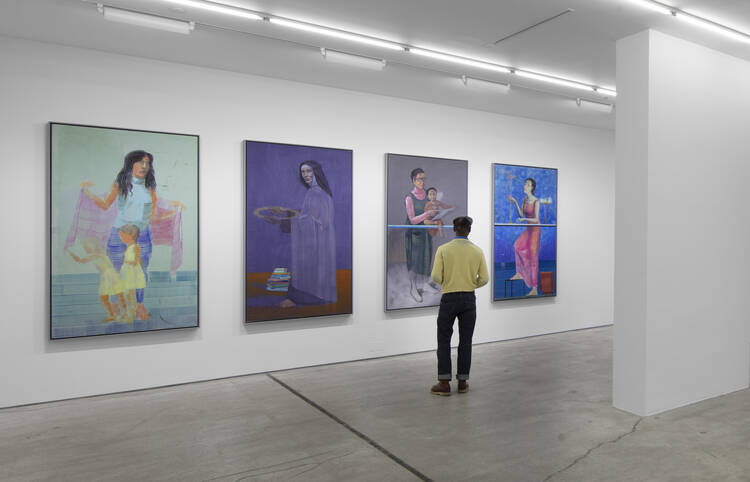 In a New York gallery—at the center of the contemporary art world—hangs a life-sized icon of a Catholic saint. In the austere space with white walls and cement floors I look up at this image of a nun in full habit, holding a halo. Against a flat purple backdrop, she glances over her shoulder to look at me, standing in awe of her.

The stack of books at her feet tell us who she is: Edith Stein, the 20th-Century German Jewish philosopher who converted to Christianity, joined the Carmelites, publicly denounced the Nazi regime and was ultimately martyred in the Holocaust. You may know her as St. Teresa Benedicta of the Cross. But what is she doing here in Chelsea, hanging on walls reserved for contemporary art?

I sat down with the artist, Carlos Vega, at the Jack Shainman Gallery, to find out. He told me in this new body of work, “Correspondences,” (on view until March 30th) he wanted to explore traditional concepts of the body and the soul. In dialogue with the 17th-century Spanish artist Francisco de Zurbarán, who painted aspirational images of women to be hung in convents across Spain and the New World, Vega decided to paint his own saints. His goal was 12, like the apostles, but that quickly doubled to 24.

Some of the women are historical figures, some mythological, and some taken straight from the artist’s own life. Along with a few sketches and studies, these 24 sizable canvases hang in the gallery, begging to be fawned over. Aesthetically they are beautiful, colorful and pleasing—they are a joy to look at. Conceptually they are inspiring; they urge us to be better versions of ourselves. To be, some might say, saints.

Below is an edited version of our conversation.

Why paint the saints?

People don’t really talk about the soul—it’s like dirty talk. People shy away, but I think it’s the ultimate question: “Who are we?” I’m here, I’ve got this body, but I have a voice inside that aches for truth and beauty, for connection. To shed my ego, to quiet my mind. I’m just like you and all of them [the saints], we are all the same—just people. We are destined for greatness, too.

I’m here, I’ve got this body, but I have a voice inside that aches for truth and beauty.

I was raised Catholic, and I participated through a big part of my life. But at a certain point I had curiosity toward Buddhism. I was practicing Buddhism for five years, but somebody asked the Dalai Lama, “How did you feel about all these conversions to Buddhism from other religions?” And the Dalai Lama said, “Well, I don’t know what to say because I feel that if you have come to this world as a member of one religion, you should investigate those beliefs before you change.”

Through all those Buddhist practices—the repetition, the mantra, the prayer—I thought that it was getting to a point where it was very similar to the rosary or Christian prayer. I came back to Catholicism because in a certain way it brought me back to that childish trust—there is something wonderful when you don’t question it too much, you just embrace religion totally open, believing in the magic of it.

What initially led you to Buddhism?

The pain of being alive. I think the human experience—even with all the wonders and beauty—is not an easy task. It doesn’t matter how fortunate you are, how much money you have in your bank. Being alive is a tough call, and I need the connection with spirituality to make the journey bearable, to get detached from yourself and to connect with the ultimate purpose. I believe in the mortality of the soul—that we are not here by chance. We are all called to be here with a purpose.

What does it mean to be a painter who deals with religion and spirituality in the 21st century?

It’s a tricky question because when you connect spirituality with contemporary art people get a little itchy. But when an African-American artist is dealing with identity and the African-American experience—what they are really saying is, “We are human beings as well. See how I see the world, have empathy with me.” Even conceptual art, when you first approach the work, it can seem abstract or random, but it really is in search of something sublime.

Society looks at artists as capricious human beings who make expensive things. Nobody goes to the studio to make expensive things. People go to the studio to talk about something important for their soul. You go through a whole process of endurance. You have to be motivated for something larger than yourself to endure that test. My choice of profession, it was a call.

Can you tell me more about that call?

I didn’t really know what sex was when I was four or five years old, but I knew that I had a terrible secret to keep. I was just an innocent kid. But then growing up, I felt the hardship that was imposed on me. I come from a very traditional family. My father was a colonel in the army; [being gay] was probably the worst thing you could be. But, I wanted to follow my call and my call was to be at the service of beauty and truth—I wanted to be an artist. I didn’t know what I was choosing. I didn’t know that it was going to be another even harder choice in life. But I felt that if I have to carry this heavy burden that I should have a life that was meaningful to me, and so I became an artist.

Tell me about some of the women you decided to paint for this exhibition. It seems like most people will recognize this one here.

Yes, this is Malala Yousafzai. I wanted to represent her before she was shot, probably the last day that she went to school with all her companions in a little bus, very similar to what I painted there. But you know, that idea of her coming to meet her destiny because it was through that terrible incident that she catapulted forward... and ultimately drove her to the Nobel Prize. I think that’s somebody with a purpose: A young woman who sees education as a step toward freedom.

This one seems different from the rest, it’s darker, more subdued.

Her name is Eleno de Céspedes, [also known as Elena de Céspedes] the first documented transsexual in Spanish history. She was born out of slaves living in Spain, in Granada. She was married, gave birth and then claimed she had a change of sex. She was inspected by a doctor—the personal doctor of King Phillip II—and was declared a male. She joined the military, she became an officer and finally she was a doctor, a physician. Then she tried to marry a woman and was declared a polygamist. She was brought back to the inquisition, they did another physical exam and they recognized that she was still a woman, although she may have manipulated her organs. She served in prison as a doctor, then she was released.

And in this painting she is less visible, more of just a sketch—

She’s invisible. Being a Spaniard, I only learned about her in the past four or five years. She has disappeared from history.

Moving across the gallery space, passing icons of Sojourner Truth, the Incan deity Pachamama, Mary Magdalene, Our Lady of Mercy, Nuwa and Hypatia, I bring Carlos to the painting that originally caught my eye and ask him:

When the Nazis came to power, she was moved to Holland for her protection. She wrote many letters to the pope, asking him to speak clearly about the concentration camps, and the killing of the Jews. And then when the Germans invaded Holland, the Bishop of Amsterdam gave a talk about the brutality of the Nazis. The next day they harvested all the Jewish converts to Christianity from all the convents and she was later killed in Auschwitz.

Then, in 1988 Saint John Paul II made her a saint in the Catholic Church and she’s one of the four protectors, the patrons of Europe. And I like that. I like her. I like the idea of the brotherhood between the Jews and the Christians. We don’t know how close we are. We are just brothers in faith. We aspire for the same.

What is your goal with this work?

I’m just trying to remind myself that I have a bigger call too. I want to realize that all these people were just people like you and me. I don’t want to be a saint, but I want to get to the point of fulfilling my destiny. I want to bring up the subject of the soul. We are destined for greatness, too. Right here, right now, we don’t have to go through metamorphosis, we can be great at any time.

I enjoy the visual arts and especially liked the Edith Stein work and her holding her halo I would presume. I also like his interpretation of the "Eleno de Céspedes" as a faded person lost in history. Looking for and then attempting to paint the eternal soul in people has too be especially difficult, a daunting task in these times. Well done and a nice write up.

I agree with Christopher: well done and a worthwhile look at this fascinating artist. Yes, a daunting task it is to portray "the eternal" in paint. Kudos to the artist for sharing with us his interaction with the saints, the church, his own human pain; we are the better for it. Much contemporary art speaks of the pain of the artist and our times, without the dimension that faith and our faith tradition bring to bear. One sees only the chaos and despair. It's wonderful to be reminded of one such as Edith Stein, who faced the worst of the evil this world contains, but with utter serenity and surrender to divine providence: "we left the camp singing...". I am heartened by this article. Thank you.

She was born out of slaves living in Spain, in Granada.
geometry dash full game.

Go to sleep and rise up at the same time each day and intention for 7 to nine hours of sleep every night. Avoid alcohol and pills.

Getting Rid Of Trauma And Phobias Of The Past Through Therapy

India bills for seven of the world's 10 towns with the worst air pollution, according to a brand new report, however previously ... Updated three: eleven AM ET, Tue March 5, 2019.