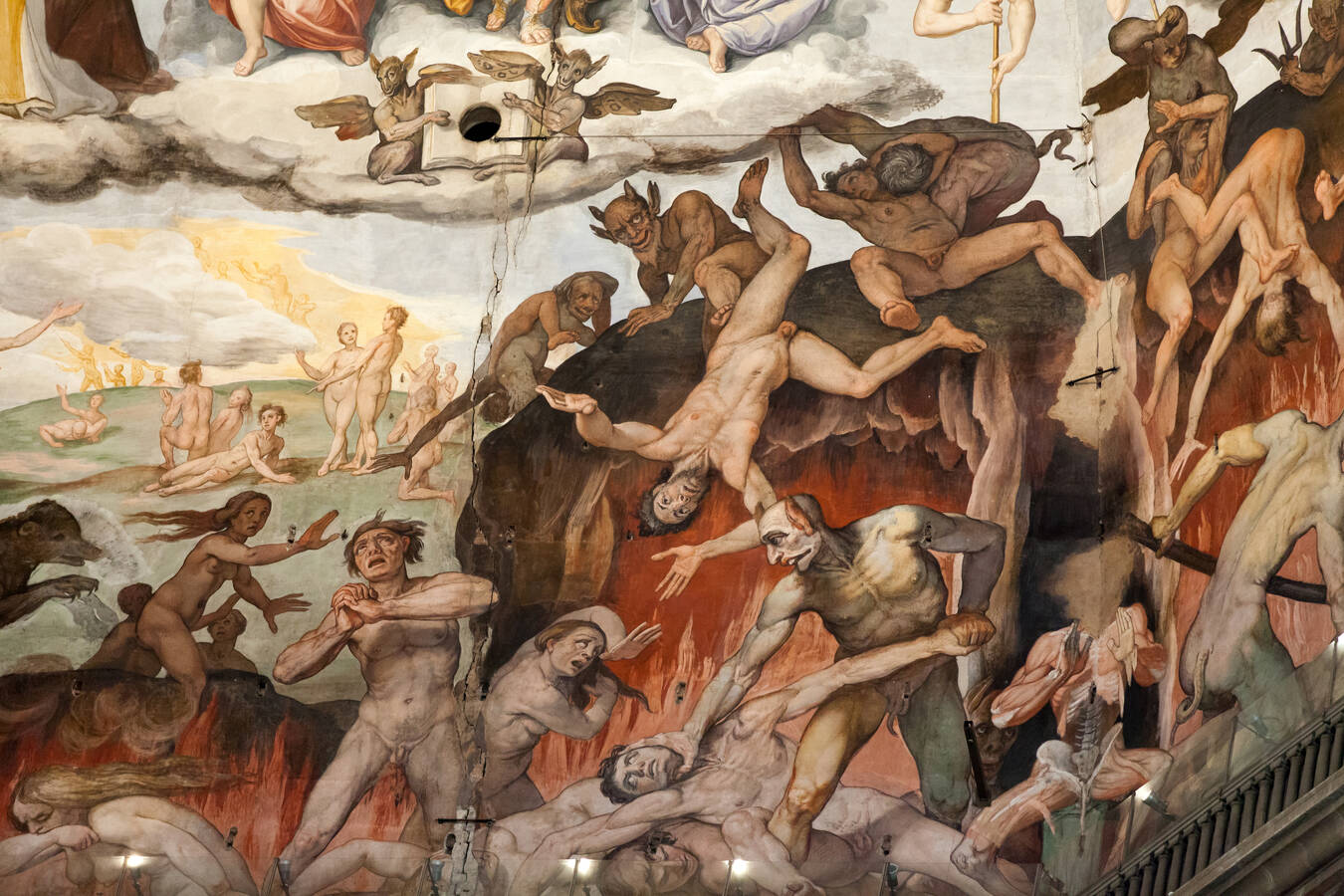 Review: To hell and back

“Dealer’s Choice,” an episode from the 1980s revival of “The Twilight Zone,” portrays a poker game in a suburban New Jersey home. One of the players, Nick, is new; he is filling in at the table for his cousin. Nick is mysterious, a bit sly and keeps getting dealt sixes. His true identity is soon revealed. A character played by Morgan Freeman asks, “What’s the devil doing here in New Jersey?” I’ll never forget how another character answered: “What are you talking about, Tony? I think he lives here!”

As a kid named Nick, watching that episode in a suburban New Jersey home myself, I was scared. These were the years of the so-called Satanic Panic; when even Geraldo Rivera, having been unable to find anything in Al Capone’s vault, turned his investigative eye toward devil worship. I was terrified of all things occult and wasn’t happy to learn that “Old Nick” is an English name for the devil. “Rosemary’s Baby” and “The Exorcist” cultivated a healthy fear of the devil that has never gone away for me.

“Dealer’s Choice” is not a work of horror or even suspense: It is a comedy. Of course, the devil would descend upon New Jersey (in another episode of the show, “I of Newton,” a demon wears a shirt that reads “Hell Is a City Much Like Newark”). When the other men at the table learn the devil’s identity, they are scared—but they don’t stop cracking jokes. In true Jersey fashion, they beat the devil at his own game.

The devil’s game, and home, has been the subject of endless interpretations.

The devil’s game, and home, has been the subject of endless interpretations. The Penguin Book of Hell is a new collection of religious and cultural visions of hell. Edited by Scott G. Bruce, a medieval historian and former gravedigger, the book considers Greek and Roman imaginations of the dead, as well as the Hebrew conception of Sheol and the early Christian idea of Gehenna. But there’s a Catholic bent to the book, with excerpts from the Summa Theologica, Dante’s Inferno, the writings of the Redemptorist priest John Furniss in the mid-19th century and even the enigmatic Vision of Tundale—composed 200 years before Dante’s vision.

A visceral, meandering journey through hell written by a 12th-century Irish monk living in Regensburg, the Vision of Tundale does not have the focus of Dante’s later work—yet its confusing nature makes the narrative feel eerily authentic. Tundale, an Irish knight, feels terror when his soul passes from his body after his apparent death. Unable to return to his earthly form, his “wretched soul” is soon surrounded by a “great multitude of unclean spirits.” They fill the house, the courtyard and the streets; and they are there not to console him, but to announce his eternal resting place.

Tundale is a “nurturer of scandal, lover of discord.” Yet the frightening, claustrophobic scene ends with the arrival of an angel sent by God. He first rebukes Tundale for not following the Lord, but then reveals his true purpose: “Be very happy and untroubled, because you will suffer only a few of the many torments that you would have suffered if the mercy of our redeemer had not come down to you.” The angel brings Tundale to hell, where he is shown punishments in hopes that his soul will return to his body—cleansed and penitent.

Writing from a secular perspective, Scott G. Bruce concludes in The Penguin Book of Hell that hell remains the “dominant metaphor” for the punitive afterlife.

Hell includes murderers, who are tossed among fiery coals. The sinners who reach the scalding iron lid “were burned until they were reduced entirely to liquid, like fat rendered in a frying pan.” Then, like “wax is strained through a cloth,” they are made whole again to be tormented further. Later, he sees the prideful attempt to cross a single-plank bridge spanning a thousand feet. They tumble into the burning river below.

Finally, Tundale sees the devil, who was “the blackest black like a raven, with the shape of a human body from its feet to its head, except that it had many hands and a tail.” The devil’s 1,000 hands each had 20 fingers; its nails “longer than the lances of soldiers and made of iron.” A disturbing vision, and yet the monk who composed this story includes a clever touch: when tortured souls escaped the devil’s grasp, he whipped them with his tail—“in this way the wretched beast struck itself in its incessant lashings. Inflicting punishments on souls, it was tortured by its own torments.” Odd, and overwhelming with detail, it is no surprise that the Vision of Tundale influenced the nightmarish paintings of Hieronymus Bosch.

In his introduction to The Penguin Book of Hell, Bruce notes that hell “has remained tenacious in Western thought.” Despite our cultural tendency to use the word to express difficulty or extremes, “the word has lost none of its religious currency.” Writing from a secular perspective, Bruce concludes that hell remains the “dominant metaphor” for the punitive afterlife. Hell represents unending, unforgiving punishment: a place of pure despair.

In Dante’s vision of that despair, the devil is grotesque, blasphemy made flesh. He is massive, three-faced: “With six eyes he wept, and down his three chins/ Trickled his tear drops and his drool mingled with blood.” He chews and claws at Judas, Brutus and Cassius. The brutal image sticks, but equally common in fiction and film is the devil as trickster: the prototypical liar, slanderer, conniver. Even when the devil is not physically present, as in Jean-Paul Sartre’s atheist vision of hell in ”No Exit,” his miserable spirit creates ruin.

What does it mean when a thoroughly religious idea entwines within the fabric of popular culture, entertainment and storytelling? Does it affect the theological resonance, turning the devil into a joke?

The result is an interesting paradox: What does it mean when a thoroughly religious idea entwines within the fabric of popular culture, entertainment and storytelling? Does it affect the theological resonance, turning the devil into a joke?

The Catholic vision of hell has a complicated history. In a 1999 address, Pope John Paul II said hell “is not a punishment imposed externally by God but a development of premises already set by people in this life.” Hell is the “state of those who definitively reject the Father’s mercy.” In a theological sense, this state is spiritual, not geographic. The Catechism of the Catholic Church describes a descent into hell, where the punishments are “eternal fire”—but “the chief punishment of hell is separation from God.” This estrangement is the antithesis of heaven, which is union with God.

Nuanced theology is often drowned out by image, yet rejection of God is the true despair. The Penguin Book of Hell is full of classic representations of eternal punishment—scenes from Homer’s Odyssey, Virgil’s Aeneid, Dante’s Inferno—yet perhaps the most immediately disturbing of the texts collected in this anthology is the section titled “Hell of Our Own Making.” There is the internal hell of the jackhammer-loud, pulsing music churned into Guantánamo detainees during interrogation. The inconceivable terror of the Nazi extermination camp at Treblinka, about which the Russian journalist Vasily Grossman said, “Not even Dante, in his Hell, saw scenes like this.” And the atomic evisceration of Japan as described by Yoshitaka Kawamoto, thinking back to when he was a child: “I could hear sobs. Someone was calling his mother. But those who were still alive were singing the school song for as long as they could. I think I joined the chorus. We thought someone would come and help us out. That’s why we were singing a school song so loud. But nobody came to help, and we stopped singing one by one. In the end, I was singing alone.”

Hell truly is other people—without love.

This article also appeared in print, under the headline “A Place of Pure Despair,” in the March 18, 2019, issue.