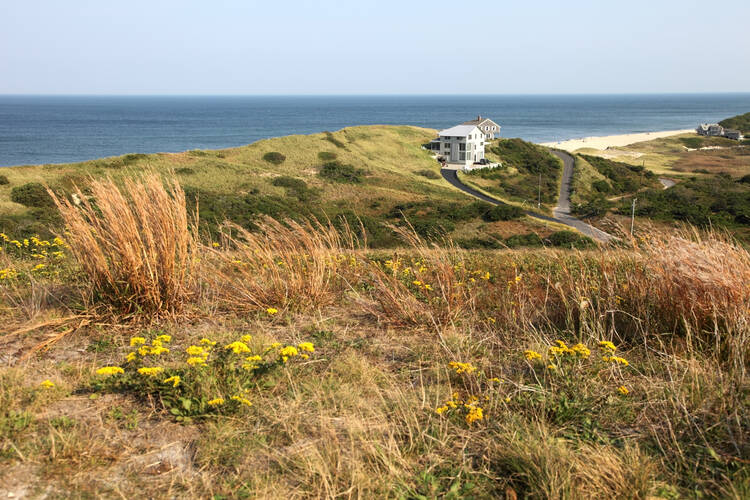 “Listen,” writes Mary Oliver, urging the reader to put aside questions and doubts as she describes terns wheeling over ocean waves, “maybe such devotion, in which one holds the world/ in the clasp of attention, isn’t the perfect prayer,/ but it must be close.” With Devotions, Oliver, who died on January 17 at age 83, offers a record of her attentiveness to the world in over 200 poems selected from more than 20 books. Frequently quoted in sermons, homilies and spiritual literature, Oliver has been something of a “go-to” poet for Christians who want to articulate the presence of holiness in the world of living things.

Devotions begins with Oliver’s most recent work, from Felicity (2015) and ends with selections from her first book (No Voyage and Other Poems, 1963). Over half a century and 400 pages, Oliver’s subjects remain consistent. Devotions often finds the poet rising early to welcome morning, setting out to chronicle the impermanent beauty of the natural phenomena near her home, which in many of these poems means the ponds, fields and woods near Provincetown, Massachusetts. Here the readers will encounter foxes and songbirds, snakes and deer, dogs and fish, each creature perfectly doing its part to enhance the beauty of the world.

Oliver’s focus on the wild landscape is so intense that it is almost startling when human figures (beyond the poet) intrude; rarely does she write about her family or engage with contemporary events. This lends her work a sense of timelessness, as if the New England she describes could be Robert Frost’s. Unavoidably, though, failures of human stewardship and the detritus of modernization upset the harmony Oliver adores. Anger marks some poems, a “lost joyfulness.” She warns in “Of the Empire,” “We will be known as a culture that feared death/ and adored power,” a culture that does not care enough “about the quality of life for/ people (other people), for dogs, for rivers.”

For Mary Oliver, the intricate beauty of nature is itself a poem and an answer to the impatient questions tormenting us, in our ambition to know, to dissolve mystery.

But this is a tonal departure; overwhelmingly these are poems of empathy, delight and awe, brimming with praise and gratitude for creation—for the dying goldenrod joyfully spilling its gold; for the fish and “her soft eggs” and the kingfisher’s “peerless, terrible beak”; for the roses that do not question, but bloom. “Joy is not made to be a crumb,” she writes, while also acknowledging “loss is the great lesson;” we have been called “to love what is lovely, and will not last.”

Though Oliver won both the Pulitzer Prize and the National Book Award, many critics have mistaken her popularity for a lack of seriousness and her familiar subjects for unsophisticated simplicity. (The New York Times, for example, never published a full-length review of any of her books.) Oliver’s poems may appear informal—only in the very earliest work is strict meter or rhyme apparent—but each is carefully constructed. Lines tumble down the page to mimic the cascading song of a thrush; two columns of short lines make up a poem about long-legged herons “fishing/ in the robes/ of the night.” In another poem, lack of punctuation replicates the ceaseless beating of a butterfly’s wings.

While the play of ornamental, formal language found more frequently in Oliver’s earlier poems is undeniably satisfying, the simpler, pared-down grace of her later work is perhaps even more engaging. Sonically pleasing, her conversational style, peppered with repetition and mild questions, invites readers to share in her project of attentiveness. After describing a swan as “an armful of white blossoms/ a perfect commotion of silk and linen” she asks (in a gentle counterpoint to Rilke), “And have you too finally figured out what beauty is for?/ And have you changed your life?”

For Oliver, the intricate beauty of nature is itself a poem and an answer to the impatient questions tormenting us, in our ambition to know, to dissolve mystery.

“Instructions for living a life:
Pay attention.
Be astonished.
Tell about it.”
(from “Sometimes”)

If nature is a poem, in our devotion to it Oliver advises us to “accept the miracle,” to make of our lives a prayer.

The last poem in Devotions is also one of Oliver’s earliest, “Morning in a New Land.” The poet wakes as Adam alone in Eden, “parting the leaves/ Like tissue on some vast, incredible gift.” To turn the leaves of Devotions is to glimpse that gift.

This article also appeared in print, under the headline “Be Astonished,” in the March 4, 2019, issue.

Carolyn Oliver’s poetry has appeared or is forthcoming in FIELD, The Greensboro Review, Booth, Gulf Stream, Frontier Poetry and elsewhere. (She is not related to Mary Oliver).