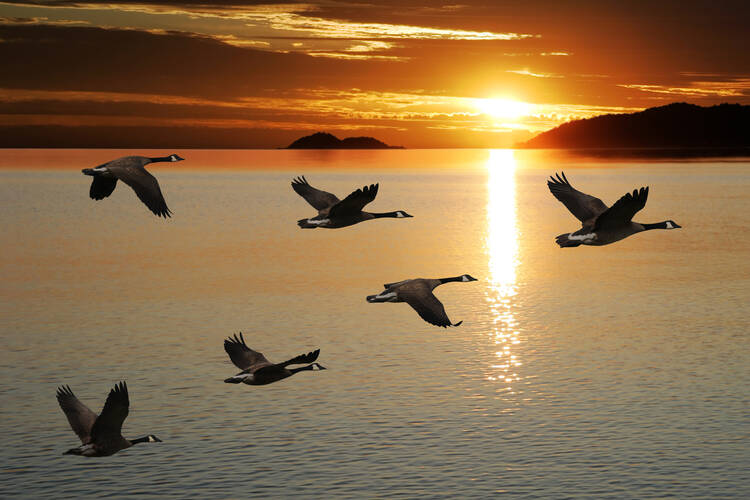 When the poet Mary Oliver died last week at the age of 83, my social media feeds blossomed into a field of tributes. I was a bit surprised, especially by the posts from some academic poets, because Mary Oliver’s work is simple (at first glance), accessible and bestselling, the antithesis of much poetry written by those affiliated with universities.

Yet I saw my peers quote from “The Summer Day,” which ends, “Tell me, what is it you plan to do/ with your one wild and precious life?” Others hedged their remembrances, saying, “I know some of you don’t like her poetry, but she was important to me because…”

For me, that sentence ends this way: In my life, poetry has overlapped with and been consonant with prayer. I don’t remember ever encountering Mary Oliver in a creative writing classroom; I do, however, recall reading her poetry in a Catholic spirituality group formed by women from several generations, all 20 of us eager to talk about faith. We sat in the hostess’s spacious backyard on a mild summer night and one of the women passed out Oliver’s “Wild Geese,” which begins:

This is quintessential Oliver: simple in one way (the sentences are clear, the images uncomplicated; if Oliver had been born sixty decades later, she might have flourished as an Instagram poet) but deep in another. The poem seeks to help the “you” feel reassured, no matter what has happened in your past. I found myself thinking that the phrase “in order to receive God’s grace” could precede these sentiments.

Meanwhile the wild geese, high in the clean blue air,
are heading home again.
Whoever you are, no matter how lonely,
the world offers itself to your imagination,
calls to you like the wild geese, harsh and exciting—
over and over announcing your place
in the family of things.

Around the time of that gathering, I found myself wanting to encounter God in some direct way. I searched for divine guidance in seemingly inscrutable signs, including those in nature—but I needed to be reminded just to observe the world’s beauty, not to try to interpret it.

Oliver herself didn’t have any declared religion; she spoke with Krista Tippett of “On Being” about attending Sunday school as a child but then feeling reluctant to join the church more fully. “I had trouble with the resurrection,” she said.

I don’t remember ever encountering Mary Oliver in a creative writing classroom; I do, however, recall reading her poetry in a Catholic spirituality group formed by women from several generations, all 20 of us eager to talk about faith.

Still, her work became more and more spiritual. For example, her latest book, a collection of selected poems, is titled Devotions. The New Yorker’s Ruth Franklin notes that “many poems here would not feel out of place in a religious service, albeit a rather unconventional one.”

In fact, I heard Oliver read her poems in a church, though not as part of a service. Christ Church Cathedral in St. Louis, the Episcopal cathedral for the diocese of Missouri, decorated in purple tones for Advent, sponsored a poetry reading in December 2007. I remember a feeling of calmness, enhanced by the low lights of the church. Oliver, slight and dark-haired, read slowly and thoughtfully. Many of the poems centered around dogs (her 2013 collection is titled Dog Songs)or scenes from nature in and around Provincetown, Mass., where she lived with her life partner, Molly Malone Cook, for more than five decades..

What called to me at that reading was a poem from her most recent collection at that time, Thirst:

It doesn’t have to be
the blue iris, it could be
weeds in a vacant lot, or a few
small stones; just
pay attention, then patch

a few words together and don’t try
to make them elaborate, this isn’t
a contest but the doorway

into thanks, and a silence in which
another voice may speak.

For me, many of the poem’s statements apply to the writing of poetry, but the title of this one is “Praying.” Again, Oliver’s poem reminded me that though I wanted a sign from on high about the next step on my path (I was contemplating, off and on, pursuing a PhD, which would require me to move away from home), prayer is not a transaction. Mine needed to be about thankfulness and silence.

Making the House Ready for the Lord
Mary Oliver

I should add that Oliver was awarded both the Pulitzer Prize and National Book Award: She is not entirely unappreciated by the literary powers-that-be (see Franklin’s article in the New Yorker from November, for example). And I do believe there is a time and place for complex, complicated poems; I love unexpected resonances and learning something new.

But in other moments, I need a poem that will help me pray. Mary Oliver is a poet who helps me with that.

Lisa Ampleman, managing editor of The Cincinnati Review, is the author of two collections of poems, Romances (forthcoming in 2020) and Full Cry. Her poems and prose have appeared in the journals Poetry, Image and Notre Dame Review.

Very nicely done. A moving tribute. I will search for her work. Thankfulness and silence are needs for me as well.

If u are a new comer to the retail corporation giant Walmart and struggling to log in, then follow this tutorial to sort out things https://walmartonelogin.co/