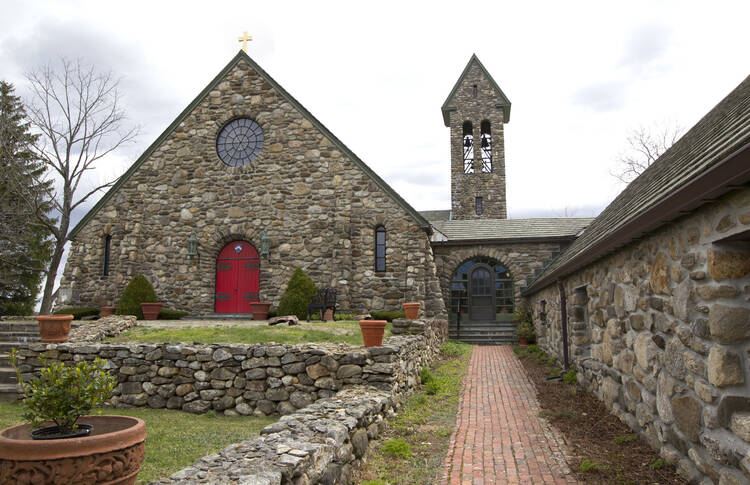 St. Joseph's Abbey in Spencer, Mass., home to 57 monks of the Cistercian Order of the Strict Observance (also known as Trappists), is shown in this April 29 photo. (CNS photo/Chaz Muth)

A few years ago, I sat down with a Trappist monk under a gingko tree in a courtyard of the Abbey of Gethsemani in Kentucky. We were talking about the spiritual life, and I expressed to him my envy that he, a monk in a contemplative order, had the time and the opportunity to devote himself to long periods of prayer and silence. I did not expect the response I received. While he acknowledged that the silence of the monastery allowed for contemplation, he said that he was envious of the opportunities for spiritual transformation my life offered. “I may have silence,” he said, “but you have the possibility of daily giving yourself to the members of your family and so to learn truly how to love.”

How to Liveby Judith Valente

I have never really known what to do with his comment. While I deeply value my family and my familial life, I have to admit that I, like so many Catholics, still tend subconsciously to define “spirituality” primarily in terms of spiritual disciplines, ones that my Trappist friend can cultivate in ways that my situation in life prevents. He is able to cultivate these disciplines because he is in a monastery that follows the Rule of St. Benedict.

Composed in the early sixth century, St. Benedict’s Rule was written as a guide for how to live the monastic life communally. Its wisdom and practicality meant that it became the set of precepts governing monastic life, and continues to be followed in monasteries around the world today; from where I’m sitting at my desk, there are at least three monasteries within an hour-and-a-half’s drive that follow Benedict’s Rule. I’ve always viewed the book primarily as a practical set of guidelines for monks about how to live, work and pray in common. When I have my students read the Rule in my classes on Christian history, we read it primarily as a historical text whose value can be measured by the fact that, 1,400 years after it was written, it continues to be followed by modern people. But I’ve tended not to read the Rule as having any guidance for myself as a husband, a father or a teacher.

In How to Live, Judith Valente argues that, far from being a text that only has relevance for monks, the Rule of Benedict has wisdom for all of us in the modern world trying to attain some measure of balance and peace.

In How to Live: What the Rule of St. Benedict Teaches Us About Happiness, Meaning, and Community, Judith Valente explores how the textoffers wisdom for those of us outside the cloister. She is someone who has endeavored to live out the wisdom of Benedict’s Rule in her daily life. A senior correspondent for an NPR affiliate in Illinois and a former correspondent for America, she is uniquely suited to this task. She is also a self-proclaimed recovering workaholic who suffers from a compulsion to overachieve, and so is someone who understands the logic of our society’s obsession with work. But as a lay associate at the Mount St. Scholastica Benedictine monastery in Kansas and someone who has dived deeply into monastic spirituality and practice, Valente understands the logic undergirding the wisdom of Benedict’s Rule as well. She argues that, far from being a text that only has relevance for monks, the Rule has wisdom for all of us in the modern world trying to attain some measure of balance and peace.

The book contains 22 brief chapters on different facets of the Rule. At the end of each chapter, Valente provides reflection questions to guide the reader to delve more deeply into the different facets she explores. There are chapters on silence, prayer, hospitality, living simply, finding meaning in work, forgiveness and continual conversion, among many others. In each chapter, Valente provides an accessible and compelling account of what it could mean to translate some aspect of Benedict’s Rule into contemporary existence in the world.

What emerges from her account is the realization that we can learn from the Rule what it could mean to live a life that is balanced, meaningful and fully attentive. While there are some aspects of the Rule that strike us as harsh—his references to corporal punishment and his prohibition on excessive laughter, for example—Valente accentuates just how balanced and wise the text is for leading monks, not only to live together in relative peace, but to live together in such a way that they become transformed into people characterized by humility, gratitude and love. Benedict constructs a vision of life in common that, as Valente argues, consciously grinds against the prevailing logic of a world dominated too often by instability and selfishness.

Benedict constructs a vision of life in common that consciously grinds against the prevailing logic of a world dominated too often by instability and selfishness.

As Valente puts it, the Rule calls all of us in the world to forge a “parallel society” in which “the ability to listen, to communicate, and ultimately to understand delivers us from self-destruction.” Valente rightly demonstrates that a Benedictine vision of life is one characterized by silent attentiveness to and care for others in all their complexity and by a recognition of our own weaknesses and need for others. Moreover, the Rule calls us to an awakened life in which we are conscious of the presence of God in our lives and in those around us.

Review: A Trappist monk tells of a life worth living
Gregory Hillis

Which brings me back to the comment my Trappist friend made to me about my family. As I read through Valente’s book, I came to realize how thoroughly Benedictine my friend’s comment was. Too often my life is characterized by non-attention, lack of gratitude and selfishness, and my friend was calling me to see the tremendous gifts that are my work and my family. I simply needed to be attentive to them in the way Benedict calls us to be attentive. In short, my friend was exhorting me to see what Valente persuasively demonstrates is at the heart of what we in the world can learn from a text written 1,400 years ago.

This article also appeared in print, under the headline “Living outside the cloister,” in the January 7, 2019, issue.