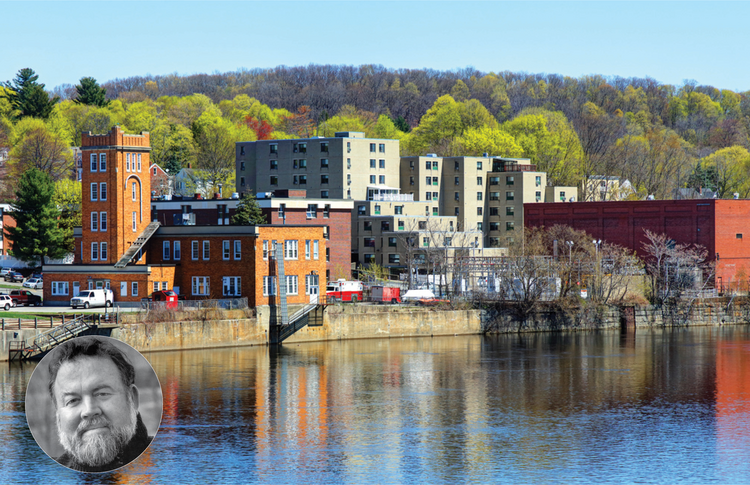 Andre Dubus lived and worked for much of his life in Havermill, Ma.

In reissuing the work of Andre Dubus, something he has never done with any other author, David Godine has shown himself to be a publisher’s publisher—just as Dubus was often called “a writer’s writer.” The latter, in the words of the series editor Joshua Bodwell, is a “double-edged compliment...at once both high praise and an intimation of authorial obscurity.”

Godine, the only person willing to publish Dubus’s work in book form without the promise of a follow-up novel, was loyal to Dubus and the writer’s own vision of his work. And Dubus was loyal to him. When presented with opportunities with other publishers, Dubus refused. And when, late in his life and in desperate need of money, he worked with other publishers, he checked with Godine first.

Dubus was in desperate need of money because of the care he required after being struck by a car on July 23, 1986, while trying to help another vehicle on I-93 north out of Boston. He describes the accident in “Lights of the Long Night,” one of the essays in his book Broken Vessels. The incident left him not a paraplegic but, as he called himself, “a cripple.” His left leg had to be amputated below the knee; the right leg was useless. As Tobias Wolff wrote in his introduction to Broken Vessels, Dubus’s essays—it can be said of all his work—are “driven by the conviction that the possibility of freedom and grace, even heroism, abides in every life.”

Dubus was in desperate need of money because of the care he required after being struck by a car in 1986.

Born in 1936 in Lake Charles, La., to an Episcopalian French father and an Irish Catholic mother, Dubus was raised Catholic and attended a Christian Brothers’ school. After college, he served as a Marine officer responsible for guarding the nuclear weapons aboard an aircraft carrier. But he had started writing stories in college, and as soon as he was discharged he attended the Iowa Writers’ Workshop, where he studied with Kurt Vonnegut and Richard Yates. After reading the stories of Chekhov, whom he considered his master, he devoted himself primarily to the short story. He moved north to Haverhill, Mass., and taught creative writing at Bradford College until he burned out as a teacher and had to retire shortly before the accident that crippled him. He was married three times and had six children, four from his first marriage and two from his last. His son, Andre Dubus III, won fame with his Oprah-endorsed House of Sand and Fog.

Dubus was an irascible, loyal, loving, smoking, hard-drinking, hard-punching, tender man, who demanded much of himself and others and, according to at least one friend, did not realize how much. He was also a devout Catholic, attended daily Mass whenever possible and had a profound devotion to the Eucharist and the reality of the sacraments, both the official church sacraments and the sacraments of daily life. He dissented from the church’s positions on contraception and sexual morality; but despite his dissent, the only writer I have read whom I could think of as “more Catholic” would be Flannery O’Connor.

The only writer I have read whom I could think of as “more Catholic” would be Flannery O’Connor.

The first volume in the new series, We Don’t Live Here Anymore, consists of Dubus’s first two books, Separate Flights and Adultery and Other Choices, and is introduced by Ann Beattie. After noting how Dubus highlights his characters at the beginnings of his stories in a “devotional moment,” and how often he writes from a woman’s point of view, she gives a sharp summary of Dubus’s work: “The stories are about how people must make accommodations once they find out there’s no winning. The external world, as Dubus sees it, is very grim—even with male and female characters who are articulate and who think they know what it is they want.”

In one story, “The Doctor,” which first appeared in The New Yorker, a doctor goes on a run through his neighborhood and comes across a person whose life he cannot save. To give the details would ruin the story but, as Beattie points out (in reference to another story), the story does not end where most writers would end it, in “a paradoxically bleak exhilaration,” but in something more life-affirming, more, in a sense, real. He doesn’t settle for the aesthetic punch, in other words; he shows the reader how a character wants to change his life. Another story in this volume, “The Fat Girl,” portrays a woman who struggles with her obesity, the love of her mother and self-acceptance, and goes on diet after diet until finally, relishing the dissolution of her marriage, she gives up. One is left wondering if she is truly happy with herself, or if she, like Melville’s Bartleby the Scrivener, just “prefers not to” struggle.

“We read Dubus’s stories...not to find out what happens next but rather to watch our deepest fears—about ourselves and a brutal, uncaring world—realized.”

Volume Two of the series, The Winter Father, includes the books Finding a Girl in America and The Times Are Never So Bad; the introduction is by Richard Russo. After learning from co-workers that Dubus at times “dated” his attractive female students, and reading of Dubus’s treatment of his family reported in Andre Dubus III’s memoir, Townie, Russo says that he started to read Dubus in a personally critical way. (Russo’s father, like Dubus himself, was largely absent from his son’s life.) The only answer to reading Dubus in this manner, he ultimately realized, is forgiveness. “We read Dubus’s stories,” Russo says, “the same way we read Jude the Obscure, not to find out what happens next but rather to watch our deepest fears—about ourselves and a brutal, uncaring world—realized.”

Such is the world in the story “The Dark Men,” which, like Hemingway’s “Hills Like White Elephants,” never mentions its subject by name. Two men from the Office of Naval Intelligence give Captain Devereaux a folder containing compromising information on Commander Joe Saldi, the best pilot on an aircraft carrier. Devereaux, knowing the folder’s contents will end the pilot’s career, has to tell Saldi. It is a chilling story because the impersonal, unreadable “dark men” are just following orders and care more about machines than men.

Dubus’s style is simple in diction but complex and sinuous in syntax.

In another story, “Sorrowful Mysteries,” Gerry Fontenot, growing up in southern Louisiana, wrestles with segregation and, after giving a black teenager his extra baseball mitt in a sandlot baseball game, is devastated by the execution of a black man accused of rape—which, his father says, would never happen if it were a white man and a black woman:

On the March night Sonny Broussard will die, Gerry lies in bed and says a rosary. It is a Thursday, a day for the Joyful Mysteries, but looking out past the mimosa, at the corner streetlight, he prays with the Sorrowful Mysteries, remembers the newspaper photographs of Sonny Broussard, tries to imagine his terror as midnight draws near—why midnight? and how could he live that day in his cell?—and sees Sonny Broussard on his knees in the Garden of Olives; he wears khakis, his arms rest on a large stone, and his face is lifted to the sky.

This passage is a good example of Dubus’s style: simple in diction but complex and sinuous in syntax.

The Cross Country Runner, Volume Three of the series, includes the last two Dubus books Godine published, The Last Worthless Evening and Voices From the Moon, as well as previously uncollected stories. Tobias Wolff gives a very personal introduction that gives us a picture of what Dubus was like in person; it reminded me much of Robert Duvall’s portrait of Bull Meechum in the movie “The Great Santini.” Here he is a rowdy, fun-loving man who, the first time Wolff met him, came up to him and kissed him on the lips, then stepped back and laughed uproariously.

What many call Dubus’s masterpiece, Voices From the Moon, is about a teenage boy, Richie, who goes to daily Mass and wants to be a priest. The only problems, besides a budding romance, are that his mother left the family when he was a young boy because she was tired of loving, and his father is going to marry his ex-daughter-in-law, the ex-wife of Richie’s older brother. Dubus, as is his wont, tells the story from the points of view of all the characters in the story but frames it with the boy’s perspective. When Richie tells Father Oberti about his father’s romance, the priest says, in what could be the ultimate point of all Dubus’s work: “It would be far better if they had fought their love before it grew. But there are much worse things than loving. Much worse, Richie.”

The works of Andre Dubus are hard to read, even though they are beautifully written—combining the simplicity of Hemingway with the fullness and fluidity of Faulkner—because they face life and love so starkly. Which is why, after almost every story and novella I read, I had to put the book down and wait before starting another. I had to let it settle into my soul before going on. And just that—the act of going on—is what Dubus encourages in us as we read him, to go on no matter how terrible and, in cyclical fashion, how glorious, life gets.

This article also appeared in print, under the headline “The sorrowful mysteries of Andre Dubus,” in the December 10, 2018, issue.