When Andre Dubus III was 10 years old, his father, Andre, called “Pop,” left his wife and four small children to be with a pretty, rich girl at tiny Bradford Junior College, where he taught English and creative writing. The former Mrs. Patricia Dubus first found work as a nurse’s aide, then returned to college and got a job in social services. But she was gone all day and exhausted when home. Even with Pop’s alimony, the family of five was forced to live in squalor on a diet of sodas and Frito casseroles in one cheap rented house after another in the failed mill town of Haverhill, Mass. Soon the oldest girl, Suzanne, was falling in with losers, and afternoon parties with drugs and sullen strangers were common in the house. Andre’s younger brother Jeb was focused on a hidden life in his room, practicing classical guitar and having an affair with an art teacher some 15 years older than he. And the oldest son, Andre III, was furiously learning boxing and inflating his muscles with weightlifting in order to protect his kin from the horrific, jail-worthy violence of “the Avenues.”

The senior Andre Dubus was increasingly becoming an acclaimed writer of graceful, sensitive, acutely observed short stories during this period, but he was stunningly oblivious to what was happening to his abandoned children. Immersed in his fiction writing and teaching, he seemed not to notice the filth or lack of food in his former wife’s house, or perhaps he just felt he could do nothing about it. Inviting Andre III over for a rare Sunday alone with his father, Pop seeks to fill the barbecuing time by playing catch but finds out his son has never learned to throw a baseball and never heard of his Pop’s beloved Red Sox, since his father never thought to invite him to a game. When he is later introduced to the woman who will become his father’s third wife, he’ll have to ask where Manhattan is, and when later he is serving drinks at a party, he will hear about Harvard Law School and have no clue about it.

It is only when Andre III enrolls in Bradford that father and son get to know each other, but then it is as hale and hearty drinking buddies, with Pop interested in the same co-eds and too much impressed with his son’s willingness to launch himself into a merciless street fight with anyone foolish enough to insult him. But Andre III can still be humiliated by the undergraduate girl whom he overhears saying, “That’s Dubus’s son. Look at him. He’s such a townie.”

“I’d heard the word before,” he reports. “They used it for the men they’d see at Ronnie D’s bar down in Bradford Square, the place where my father drank with students and friends. It’s where some men from the town drank, too—plumbers and electricians and millworkers, Sheetrock hangers and housepainters and off-duty cops: townies.” Andre III escaped the stigma by quitting school and then heading west to the University of Texas, where he became a Marxist, earned a degree in sociology and took up meditation. And then, in discontent and desperation back in Massachusetts, he discovered the yen to write fiction just as his father had, and he sold his first-ever story to Playboy magazine.

“I felt more like me than I ever had, as if the years I’d lived so far had formed layers of skin and muscle over myself that others saw as me when the real one had been underneath all along, and writing—even writing badly—had peeled away those layers, and I knew then that if I wanted to stay this awake and alive, if I wanted to stay me, I would have to keep writing.”

Andre Dubus III would later publish The Cagekeeper and Other Stories and the novel Bluesman, but it was in 2000, when Oprah Winfrey chose his House of Sand and Fog for her book club, and which was later made into an Academy Award-nominated film, that he found a public recognition far wider than his father’s.

Andre senior was dead by then, having suffered a heart attack at age 62 after being confined to a wheelchair for 12 years following a freak car accident that dramatically changed and softened him. And his son was a changed man, too, a husband and father who had given up his vicious responses to others after recognizing how much his own aggressiveness cost him, both emotionally and spiritually.

Looking into the New Testament in his distress, he chanced upon the line, “Love one another.” His frankly confessional, even-tempered, often shocking memoir is a testament not just to a stubborn, against-all-odds survival but to a healed man who has found the redemptive power in fulfilling that command.

This article also appeared in print, under the headline “Fatherless Son,” in the April 25, 2011, issue. 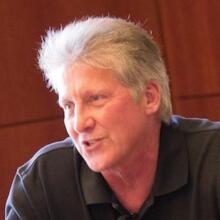 Ron Hansen’s novel A Wild Surge of Guilty Passion will be published in June.