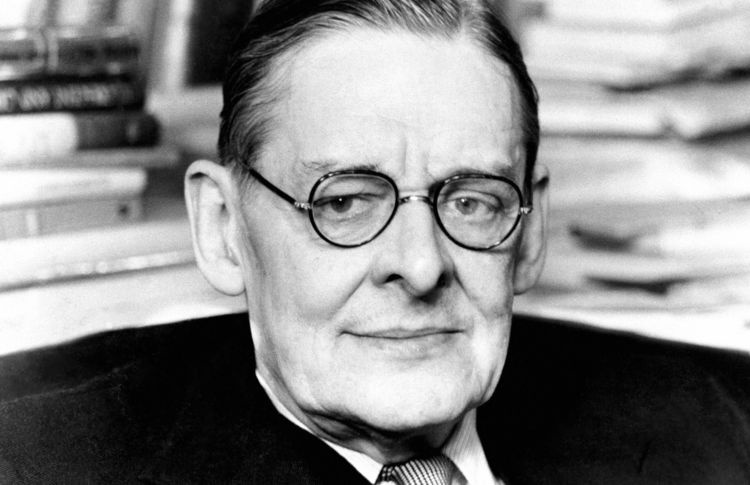 I first read T. S. Eliot’s poetic sequence Four Quartets as an eighth-grade Catholic schoolgirl, in a thin hardbound anthology from our small school library. I usually preferred fiction, but I was floored by lines like these in the final poem: “And the end of all our exploring/ Will be to arrive where we started/ And know the place for the first time.”

As a child feeling the pull of approaching adolescence, about to move away from the safety of a neighborhood school to a large high school nearly half an hour away, I was feeling anticipatory nostalgia for the ways that Sacred Heart School had shaped me, and T. S. Eliot helped me process that experience. I didn’t “understand” much of the poems, but I responded emotionally to them, which is a good approach to encountering poetry at any age.

The poems in T. S. Eliot's Four Quartets circle endlessly in and out of philosophies about time and memory, repeating themes and images.

I later read the sequence (celebrating its 75th anniversary this year) during both my master’s and doctoral exams, and in between I wrote a paper on how “East Coker,” the second poem in the sequence, enacts the via negativa championed by St. John of the Cross. Each time I read Four Quartets, that phrase about exploring struck me like a gong.

As a student, I learned that each of the four poems—“Burnt Norton,” “East Coker,” “The Dry Salvages” and “Little Gidding”—has five sections that mirror each other. The fourth section of each, for example, is a brief lyric interlude that connects to prayer, Mary or the Trinity. The sequence itself returns repeatedly to the same ideas, for example, these in “Burnt Norton”: “Or say that the end precedes the beginning,/ And the end and the beginning were always there/ Before the beginning and after the end./ And all is always now.” The poems circle endlessly in and out of philosophies about time and memory, repeating themes and images.

I also learned that Eliot was born in my native St. Louis, with extended family deeply connected to the Unitarian Church and Washington University. I knew that he’d left for Harvard in 1906 and virtually never came back, though he writes about the Mississippi River to open “The Dry Salvages”: “I do not know much about gods; but I think that the river/ Is a strong brown god—sullen, untamed and intractable.”

Eliot moved even farther away, to England, in 1914, and worked as a bank clerk as he wrote now-famous modernist masterpieces like “The Love Song of J. Alfred Prufrock” and The Waste Land. In 1927, he converted to the Anglican Church, an experience that affected much of his later work, including the long poem “Ash Wednesday” and Four Quartets, which he started writing in 1935.

I also saw how divided contemporary poets are about Eliot’s legacy. He has a reputation for being an elitist, including specific allusions and quotes in foreign languages without translation—assuming, perhaps, that the reader has the same breadth of knowledge.

Readers also feel qualms now about Eliot’s character. Anthony Julius published T. S. Eliot, Anti-Semitism, and Literary Form in 1995, noting anti-Semitic themes in Eliot’s early poetry. As he said in 2003, promoting a new edition, “We ought not to seek to outlaw Eliot’s poems, but neither can we submit to them. We should not ban them; but we must not abandon ourselves to them.” He saw no evidence of such prejudice in any of Eliot’s poems after 1922.

Still, it raises a question many readers have these days: If the personality of the writer himself is something I object to, should I enjoy the work? Four Quartets sometimes does not help—it employs many abstractions, something teachers of creative writing often discourage. It is dense and allusive and assumes the reader knows exactly what is happening.

T. S. Eliot speaks of the Four Quartets as among his highest achievements, and readers interested in spiritual exploration will respond to the poems.

But Eliot speaks of the Four Quartets as among his highest achievements, and readers interested in spiritual exploration will respond to the poems. For example, the sequence reflects some Hindu concepts and includes a scene from the Bhagavad Gita in “The Dry Salvages.” As a person of faith, I also respond to those lyrical fourth sections. “East Coker” emphasizes the Eucharist there; “The Dry Salvages” includes a prayer to Mary on behalf of sailors; and “Little Gidding” says, “Love is the unfamiliar Name/ Behind the hands that wove/ The intolerable shirt of flame/ Which human power cannot remove.”

Eliot also emphasizes the via negativa, or negative way, a spirituality often linked to mystics focused on meditation and “death of the self.” Its 16th-century proponent, St. John of the Cross, coined the phrase “dark night of the soul.” This theology focuses not on the presence of God but on absence and negation—of our own will in particular. As Eliot says in “East Coker,”

I said to my soul, be still, and wait without hope

For hope would be hope for the wrong thing; wait without love

For love would be love of the wrong thing; there is yet faith

But the faith and the love and the hope are all in the waiting.

Later, he includes a passage that echoes St. John of the Cross’s Ascent of Mount Carmel:

In order to arrive there,

You must go by a way wherein there is no ecstasy.

In order to arrive at what you do not know

You must go by a way which is the way of ignorance.

The spiritual seeker in this approach is someone who has felt the presence of God in the past but does not feel it now, who seeks by not seeking, through letting go.

In fact, I know people who have used Four Quartets as spiritual reading during Lent, sometimes paired with St. John of the Cross. In my opinion, the best way to approach this sequence is to overcome its referential nature by using aids, to read it in an anthology that includes footnotes or summaries, for example. If you know that the opening of “Burnt Norton” refers to a particular place Eliot visited with Emily Hale, a woman he now regrets not having pursued, the lines about “the door we never opened/ Into the rose-garden” are suddenly clearer.

Reading a poem simply by focusing on an author’s biography can be limiting, though. It also helps to look for the patterns Eliot uses, to see the four different seasons at work in each of the poems, the four elements (air, earth, water, fire), and the patterning of those five sections.

Or to listen to the poems. There is an audio recording of Eliot available, as well as readings by Alec Guinness and Jeremy Irons. Hearing a poem out loud helps us appreciate how the sound elements work together and also moves the experience of reading away from the page and into the body.

For those who count themselves spiritual explorers, a dive into the Four Quartets, with a clear eye on the background of its poet and a grain of salt, can help us too “to arrive where we started/ And know the place for the first time.”

This article also appeared in print, under the headline “Exploring Eliot's 'Four Quartets',” in the Fall Literary Review 2018, issue.