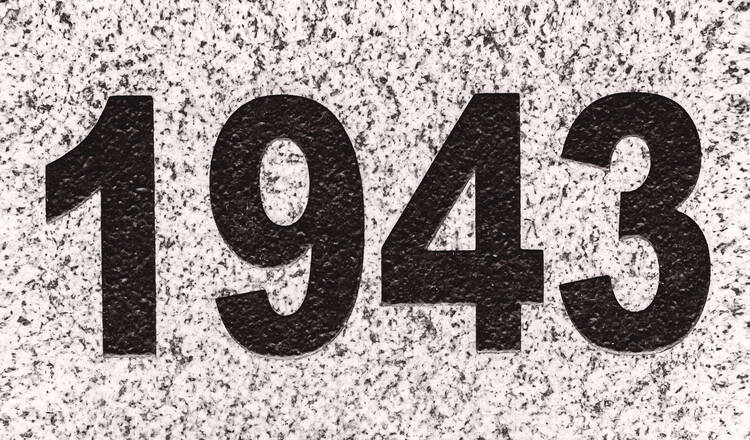 In the midst of his fierce battles against Pelagius, Augustine offers a vivid interpretation of Luke’s account of Peter’s denial of Jesus after Jesus’ arrest. Following the third denial, Jesus looks upon Peter across the courtyard of the high priest. Augustine writes of this moment, “By his mercy, the Lord in a hidden manner helped him, touched his heart, awakened his memory, visited the interior human being with his grace, and stirred up and produced a love in the interior human being to the point of exterior tears.” Grace in the gaze of Christ transforms Peter’s interiority and allows him both proper remorse for his denial as well as the proper reception of Jesus’ mercy.

The Year of Our Lord 1943by Alan Jacobs

Alan Jacobs’s The Year of Our Lord 1943 is a collage of the intellectual considerations of five thinkers who, in their experience of the violence of World War II and their revulsion at the fascism that fueled it, contemplate the nature of education and its renewal after the anticipated Allied victory. Ultimately, as Jacobs concludes, Simone Weil, Jacques Maritain, C. S. Lewis, W. H. Auden and T. S. Eliot see education as vital to the rebuilding of Europe and the reassertion of Christian values. Furthermore, these thinkers seek to dethrone technological advance as the principal concern of education and replace it with the formation of appropriate human feelings, sensibilities and emotions. For it is the realm of emotion—that place where the grace of Christ works on Peter—that human beings are most subject to demons.

Yes, demons. Jacobs presents an intellectual history of serious philosopher-poet activists who write, offer public lectures at prestigious universities and crusade against the further erosion of Christian institutions and education that led to barbaric “mechanized caravans” sweeping across Europe. And they all countenance and employ demonic imagery in their understanding of human beings and human history. After all, the demonic works on human sensibilities, dreams and feelings. The demonic exults in violence.

The very first scene in the book depicts W. H. Auden’s experience of going to the movies in November 1939. He is in Yorkville, a German neighborhood on the Upper East Side of Manhattan. When newsreel footage of German soldiers rounding up Polish prisoners is shown, the German-American audience in the theater shouts, “Kill them! Kill them!” Auden is shocked. Jacobs records Auden’s own recollection: “‘I wondered why I reacted as I did against this denial of every humanistic value.’ On what grounds did [Auden] have the right to demand or even a reason to expect a more ‘humanistic’ response?”

The answer that Jacobs offers in synthesizing the work of his five subjects is implicitly that somehow, Auden was educated in a properly “humanistic” mode that allowed him to cultivate the proper response—Christian, moral, human—to a group of human beings stripping another group of human beings of their personhood. Auden was revolted.

Except for the relationship between Auden and Eliot (Eliot published Auden), all of the other interactions between the principals are incidental. Weil meets Maritain and requests a meeting with President Franklin D. Roosevelt. Lewis wrote papers for Eliot’s circle of scholar-friends contemplating the future of Europe. Auden commented on Weil’s nearly repellent passion for her ideas. Eliot wrote the introduction for Weil’s The Need for Roots in 1952. Yet the concerns of the five principals regarding the future of education clearly intersect in 1943.

On Jan. 14, 1943, Maritain delivered a lecture at Yale that concludes: “The prime goal of education is the conquest of internal and spiritual freedom to be achieved by the individual person, or, in other words, his liberation through knowledge and wisdom, good will, and love.” C.S. Lewis, delivering the Riddell Memorial Lecture during the same week in New Castle, argued that the task of educators was to inculcate in their students not only that some thoughts are true and others are false, but, indeed, “some feelings are appropriate and adequate to a situation while others are not.” Throughout his writings, Lewis stresses that pedagogical attention should be afforded to Augustine’s ordo amoris: the appropriate response of the affections to a given subject or situation.

Simon Weil and the art of paying attention
Matt Emerson

Auden, speaking at Swarthmore College in January 1943, argued that students should discern a vocation from their own interiority or affective experience rather than taking up a vocation extended to them by the state. In 1943 Eliot published “Notes Toward the Definition of Culture,” in which he defines culture as the incarnation of religion and contends that families bear the responsibility both of transmitting culture and of forming a child morally. Jacobs frequently criticizes Eliot’s evasive prose but sees in his essay an impulse toward the formation of a person apart from the state’s general inculcation of national identity.

Maritain, Lewis, Eliot, Auden and Weil were graced with wisdom, innovative thought and compassion as the world around them seethed in demonic violence.

Last, Weil, during the last months of her life in 1943, wrote that education exists to “show what is beneficial, what is obligatory, what is good...[it] concerns itself with the motives for effective action.” Jacobs concludes that with Weil, “We are back, then, to Augustine’s ordo amoris: education is a disciplining of the affections to make them ‘ordinate,’ appropriate and adequate to the circumstances.”

Jacobs’s swirling account of Maritain, Lewis, Auden, Eliot and Weil is a wonderful introduction to the lives of these men and woman—particularly Auden and Weil—struggling with the violence of the world in 1943. However, out of this synthetic swirl of ideas, the reader comes to understand the importance of personhood and moral formation but has no clear idea how one, through some humanistic curriculum, might arrive at ordo amoris—the interior state that would be sickened by and reject all forms of state-sponsored violence, the interior state that propels the five principals in their work during the year 1943. After all, it seems that such Christian sensibilities, according to Augustine, are gifts of God’s grace. And indeed Maritain, Lewis, Eliot, Auden and Weil were graced with wisdom, innovative thought and compassion as the world around them seethed in demonic violence.