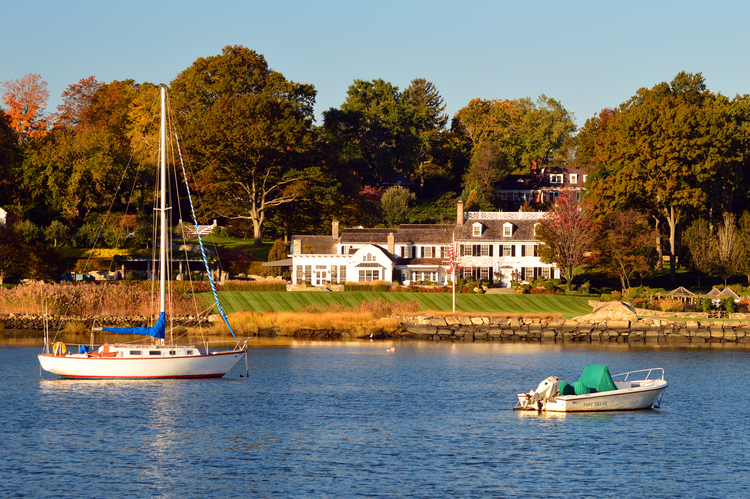 A waterfront estate on the shores of Indian Harbor in Greenwich, Conn (iStock).

Greenwich, Conn., is a place where social and financial status are the important things in life. Children attend birthday parties where leather jackets are given as favors. Large families are a sign of wealth: Having many children implies the ability to hire multiple nannies. The women have traded in their careers for bottomless mimosa brunches mid-week, and all of them have had plastic surgery in the hopes of “keeping their husbands interested.”

At least, this is the Greenwich depicted by Lauren Weisberger in her newest book, When Life Gives You Lululemons. In her famous novel The Devil Wears Prada, Weisberger took aim at the terrible jobs and bosses of post-collegiate life and the underside of the fashion world. Now, Weisberger looks at life in the suburbs from the perspective of three women in their late 30s. Emily Charlton, the senior assistant to the titular demon in The Devil Wears Prada, returns—now running her own struggling business, specializing in public relations for celebrities. Her childhood friend Miriam also lives in Greenwich, to which she is trying to adjust after moving out of New York City with her husband and children. And Miriam’s old friend, former supermodel Karolina, is married to a U.S. senator and has been arrested for driving under the influence with children in the car.

When Life Gives You Lululemons is a guilty pleasure and a fun summer read for fans of the “Real Housewives” franchises who might also appreciate a sprinkling of social critique.

Weisberger’s book chronicles the friendship and loyalty of women in the midst of major life changes, such as imploding marriages and career slumps. This is the book’s heart, even as it is surrounded by gossip, profanity, casual sex and over the top parties.

When Life Gives You Lululemons is a guilty pleasure and a fun summer read for fans of the “Real Housewives” franchises who might also appreciate a sprinkling of social critique—though it is only a sprinkling. The central characters are aware that much of life in Greenwich is not normal and it may be giving their children unrealistic expectations and warped values. But the book falls short by presenting lives of incredible luxury as typical even as it pokes fun at the absurdly wealthy.

This article also appeared in print, under the headline “The Devil wears yoga pants,” in the July 23, 2018, issue.