Heaven Can Wait: The sad silliness of 'The Five Year Engagement'

Heaven Can Wait: The sad silliness of 'The Five Year Engagement' 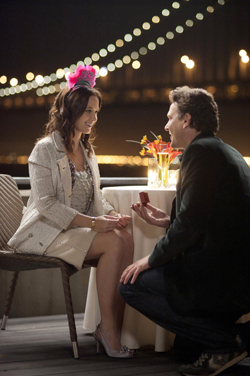 Sometimes, while I am watching a movie, I catch myself thinking that the editing is sloppy and that the dialogue in many scenes seems to go on for far too long, to the point where it actually causes the audience to feel awkward watching. These are occasions when a film editor hasn’t clipped a scene before one of the actors says something particularly vulgar, or inane, almost as if some small bloopers have made it into the final cut. But then, I wonder to myself, perhaps that’s the point of some directors, to make the audience feel that way, as if, perhaps, we are witnessing life as it really occurs and not a Hollywood-cut version of our lives. Then again, some lives and some dialogue seem less important than other lives and dialogue, and most of what you see in The Five Year Engagement fits that category, and would have benefitted from a good clipping.

"The Five Year Engagement" stars Jason Segel ("Forgetting Sarah Marshall"; "I Love You, Man"), who also wrote the screenplay, as Tom, a chef in an upscale clam restaurant in downtown San Francisco. Tom meets Violet, played by Emily Blunt ("The Young Victoria"; "The Devil Wears Prada"), a British-born psychologist-in-training who is seeking to obtain her first real position after wrapping up her PhD. They meet at a New Year’s Eve costume party where Tom is dressed as a large rabbit and Violet as Princess Diana. The film’s troubles begin at the party—a scene that is revisited several times throughout the film—as one struggles to find any chemistry between the two actors.

As an ordinary guy, Tom is mostly just dull. His demeanor is awkward, like when a tall man (Jason Segel is 6’4”) hunches his shoulders and grins apologetically to everyone shorter than him at a party. Tom is not a hero, most of all, he is not Violet’s hero. As for Violet, she also presents few winning qualities. She laughs and she smiles, but we do not ever get to know her. In fact, there is little opportunity—in the script, or by Nicholas Stoller’s direction—to see kindnesses, affections, struggles, vulnerabilities, or love between these two. As their relationship and engagement drag on, you want to root for them. Surely, you are supposed to be rooting for them. But it’s tough.

About that five year engagement: It is never quite clear why they don’t simply get married. Their problems are rather small in contrast to most real couples I know. Violet gets a great job in Ann Arbor and Tom agrees to uproot himself, too, and join her for two years. Okay. So, then, why couldn’t they marry during those two years? It is unclear. Then, Violet’s post-doctoral fellowship is extended for another three years. By this time, they don’t marry because Tom is clearly unhappy and veering off into a serious depression—something that is meant to be funny, but most often falls flat. Violet has a momentary fling with her boss and even this is uninteresting and without passion.

It was difficult to like anyone in "The Five Year Engagement," but I found myself surprised to be most interested in Tom’s dopey best friend, Alex, played by Chris Pratt, and his wife, Violet’s sister, Suzie, played by Alison Brie. They hook up unexpectedly at the original engagement party for Tom and Violet and Suzie quickly becomes pregnant; they marry promptly and without fuss, and throughout the film we witness them working together on creating a loving, if quirky, partnership.

The humor of "The Five Year Engagement" usually steers toward the slapstick and the cheap gag, as when Tom and Violet begin talking one evening on the sidewalk about how they should make love in the snow, right there and then, on a cold Michigan night—until they jump in the snow bank and Tom hurts himself on a fire hydrant. Even this comes off completely without passion, or humor. Then, there is the vulgarity which—I am no prude—is simply used poorly. Such words can punctuate funny situations and make a theater roar. This didn’t happen during The Five Year Engagement; it only felt like middle school.

Let me also say a word about religion in the film. Religion rarely seems to mean something in most people’s lives except for when couples marry, people die and occasionally, when babies are born. Interestingly, Jason Segel was raised in a home with a Jewish father and a Christian mother, but there is little religious sensitivity in his movie. Religion only seems to matter to the older generation in "The Five Year Engagement," to the parents of the engaged. Both sets of parents—Tom’s father at least is Jewish and Violet’s divorced parents appear to be Anglican—gather to plan the upcoming ceremony, an Orthodox rabbi beside Tom’s dad, and an Anglican priest beside Violet’s family.

“All of the men present will wear yarmulkes,” the rabbi informs the room.
“And all eligible Christians will partake of Communion,” adds the priest.

The couple then question each other about these religious demands. Violet says to Tom that she has never heard the word, yarmulke, come out of his mouth until this day. “Do you even have one?” she asks him. “Yeah, I have a yarmulke. It is in…my Jewish drawer,” he responds.

Later, when Tom and Violet are once again preparing to get married, Tom does the planning because Violet remarks how busy she is at work. (This screenplay even makes her work into something trivial, as we watch post-doc PhDs center their researches around stale donuts.) We watch as Tom arranges with a Chabad rabbi to conduct their ceremony, who then attends their rehearsal dinner at a pork barbeque. This gaff is not presented as humor, which would miss the mark terribly, but comes across as simply dumb.

Religion does come up again later, at the film’s end. Without telling too much, I will simply say that Violet invites Tom to quickly choose which sort of clergyperson he would like for a ceremony. A line of men is literally standing there in front of them, as Violet names the options: “Jewish? Christian? Extreme Christian? Buddhist? Or, justice of the peace?”

Tom chooses the last. The “Extreme Christian” option is portrayed as an Eastern Orthodox bishop wearing a miter. The Buddhist is a barefoot, nearly naked Tibetan. This is again humor aimed at the lowest possible common denominator.

It doesn’t have to be that way. Occasionally there are good movies that treat religion with sensitivity, and not just period pieces by Francis Ford Coppola and Martin Scorsese (although these are superior). "Keeping the Faith," for instance, released in 2000, with Edward Norton and Ben Stiller playing a priest and a rabbi, is both sensitive and accurate about matters of faith and spirituality, as well as love. I think I will watch it on my small screen, tonight.

This article also appeared in print, under the headline “Heaven Can Wait,” in the May 21, 2012, issue.

Jon M. Sweeney reviews often for America. His most recent book is The Pope Who Quit: A True Medieval Tale of Mystery, Death, and