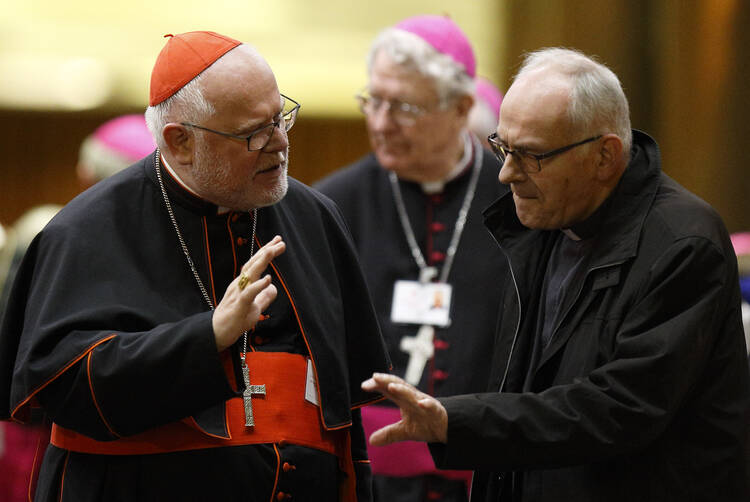 Pope Francis has frequently said that he is not concerned with changing doctrine, but only with seeing that the church’s approach to difficult, even intractable problems becomes more pastoral. But at the meeting of the Synod of Bishops on the Family in October, the cry from some cardinal and bishop participants as well as lay commentators was that Francis’ synod was trying to change doctrine, even that it represented a “Plot to Change Catholicism,” as described in Ross Douthat’s provocatively titled op-ed in The New York Times. At the same time, rarely has one seen an acknowledgement by synod fathers that doctrines not only develop but also sometimes change. Doctrinal language is often used carelessly.

First, one needs to distinguish between the church’s doctrines and its dogma. Dogma—the articles of the creeds and the solemn (infallible) proclamations of the popes or the magisterium—constitute the church’s “Rule of Faith.” The correct term is that they are “irreformable,” which means that the direction of the judgment contained in the dogmatic statement cannot be reversed. But dogmas can be reinterpreted by subsequent magisterial actions, as when the Second Vatican Council developed or reinterpreted the First Vatican Council’s definition of what is usually called papal infallibility. A careful reading of the decree actually says that when the pope speaks ex cathedra in the exercise of his office, he possesses by divine assistance that infallibility which the divine Redeemer willed his church to enjoy. In other words, the pope does not possess infallibility, but rather, it is a charism of the church that, under certain limited circumstances, he can exercise.

The council expanded that definition by including the bishops with the pope in the exercise of the church’s infallibility:

Although the individual bishops do not enjoy the prerogative of infallibility, they nevertheless proclaim Christ’s doctrine infallibly whenever, even though dispersed through the world, but still maintaining the bond of communion among themselves and with the successor of Peter, and authentically teaching matters of faith and morals, they are in agreement on one position as definitively to be held. This is even more clearly verified when, gathered together in an ecumenical council, they are teachers and judges of faith and morals for the universal Church, whose definitions must be adhered to with the submission of faith (“Lumen Gentium,” No. 25).

Furthermore, the council taught that the faithful also share in the church’s infallibility:

Doctrines—official teachings of the church—do not originate in propositions or rules, but develop out of life as the community tries to describe the mystery of the God encountered or how Christian life is lived out in response. Especially in the areas of morality and Christian life, doctrine must always be related to real pastoral problems; it must take into account human experience, new information, cultural and historical contexts and its effects on others.

Thus doctrines develop and sometimes change because of the ways in which they are “received” by churches and councils and lived out in practice. John T. Noonan, a Catholic intellectual and senior judge of the United States Court of Appeals for the Ninth Circuit, argues that on the topics of slavery, religious liberty and usury the teaching of the Catholic Church has definitively changed, while a change is in progress on divorce—though he does not say what that change might be. For example, the Second Vatican Council reversed a number of teachings of previous popes. In 1832 Pope Gregory XVI in “Mirari Vos” referred to “that absurd and erroneous proposition which claims that liberty of conscience must be maintained for everyone.” Freedom of conscience was among the errors listed in Pius IX’s “Syllabus of Errors,” as well as the separation of church and state. Leo XIII also denied that religious liberty was an objective human right, though it might be tolerated for the common good. The council, in teaching that the person has a right to religious freedom (“Dignitatis Humanae,” No.2), in Judge Noonan’s words, reversed “the teaching of theologians, bishops, and popes going back to St. Augustine in the fourth century.” Affirming the principle of religious liberty also implies that the church no longer objects to the separation of church and state.

Truth Is a Person

Though Mr. Douthat correctly distinguishes between the doctrinal teaching on the indissolubility of marriage and a “pastoral change,” he adds that the pastoral argument “is basically just rubbish.” But this last statement makes no sense whatsoever. The Scriptures themselves clearly manifest that in the very first Christian generation the teaching of Jesus on divorce and remarriage needed to be understood and applied pastorally. Along with clearly handing on the teaching of Jesus, St. Paul makes an exception in the case of a Christian married to an unbeliever who separates; in such case, he says, the believer is not bound as “God has called you to peace” (1 Cor. 7:15). Similarly, although scholars continue to debate the exact meaning and scope of the famous “exception clause” for porneia in Matthew 19:9, this is clearly a pastoral accommodation of the teaching of Jesus to a specific set of circumstances.

The Orthodox Church has long recognized the possibility of remarriage on the basis of its principle of economy. After a lengthy discussion of the Orthodox practice at the Council of Trent, remarriage was not condemned, though the 16th-century council objected to the practice of Martin Luther and other reformers. For Catholics, the annulment process is another example of deep pastoral reflection on what it means to say that God “has joined” a particular marriage. This led to the development of solutions that grant the possibility of remarriage on the basis of a judgment that the prior union lacked something essential for martial indissolubility. The same is true of the “internal forum” solution, in which a couple, after prayer and discernment and with the advice of a confessor or spiritual director, makes a judgment in conscience that a marriage is not one to which God holds them bound.

The internal forum solution, already widely used by many pastors, though not welcomed by Rome, has now been recommended in its basic form by a two-thirds vote of October’s synod after an intervention by the German bishops that brought Cardinals Walter Kasper and Gerhard Müller of the Congregation for the Doctrine of the Faith together in agreement, though without addressing the question of admission to the Eucharist. It should be remembered, however, that the synod is consultative, not deliberative. All of these pastoral accommodations represent efforts to deal concretely with the pastoral needs of individuals without holding them hostage to a general rule considered in the abstract, as several members of the synod have observed. The church has been making pastoral accommodations since the beginning, which means that future accommodations cannot be ruled out. If this, then, is the history, why is there so much anxiety on the part of Francis’ critics?

History shows that some doctrines have changed. But important as doctrine is, it is never an end in itself; it is not to be construed either as normative teaching that serves as a benchmark of Catholic identity, nor should it be reduced to something merely regulative and informational, purging it of its mystagogical and transformative character, as Richard Gaillardetz has argued in an article on Francis’ ecclesiology. Like Pope John XXIII, who at the beginning of the Second Vatican Council called for a magisterium that was fundamentally pastoral in character, not simply repeating previous doctrinal formulations, Francis’ approach, according to Dr. Gaillardetz, is one that emphasizes the “pastorality of doctrine.” Dr. Gaillardetz states that doctrine must be interpreted in relation to the core Christian kerygma and in light of the pastoral context in which it is being applied. He adds that Francis has “admitted to a certain reluctance to speak of ‘absolute truth,’ not because he was a ‘relativist’ but because, for Christians, truth is mediated through a relationship with a person, Christ. As such, truth is always encountered in history.”

In spite of the differences evident among the participants, the Synod on the Family represented a transparency not seen in the Catholic Church since the council. The 13 cardinals who claimed in a letter to Pope Francis that the synod was “designed to facilitate predetermined results on important disputed questions” certainly had no complaints over earlier meetings that were completely controlled by Rome. Many bishops have commented that they were a waste of time. But this one made some cautious progress. For most Catholics this is a sign of hope. More recently, at a gathering of bishops and church workers in Florence, Francis said “Christian doctrine, in fact, isn’t a closed system void of questions or doubts, but is alive, restless, animated. Its face ‘isn’t rigid, its body moves and develops, it has tender flesh. Its name is Jesus Christ.”

Thomas P. Rausch, S.J., is the T. Marie Chilton Professor of Catholic Theology at Loyola Marymount University. His book, co-edited with Richard R. Gaillardetz, Go Into the Streets: The Welcoming Church of Pope Francis, will appear in the spring.

Show Comments (
2
)
Comments are automatically closed two weeks after an article's initial publication. See our comments policy for more.
Henry George
6 years 11 months ago
Is there a precise distinction between Dogma and Doctrine ? If so, can someone please tell me what it is ? If the interpretation of Dogma - which is what Doctrine is - can change, then what is the point of Dogma ? If Doctrine can change - can it not change back ? Could a later Council decide that the Truth of Salvation does not subsist but is found only in the Catholic Church ? I wish all the "Progressive Changes" of Vatican II had truly led to a better Church/World and an overabundance of the outflowing of Charity - the Love of God poured into our Hearts by the Grace of the Holy Spirit - sadly that does not seem to be the case.
Andrew Boyd
6 years 11 months ago
Dogma is a divinely revealed truth necessary for salvation. Doctrine is a general term covering many levels of teaching, but distinct from discipline. The Trinity, divinity of Christ, the Resurrection - dogmas. Opposition to the death penalty, abortion, or teacing on the nature of the church, sacraments, etc - doctrine. Priestly celibacy, fasting on Fridays in Lent, how to receive communion, etc - discipline.