Daniel in the lions’ den: A Berrigan biography 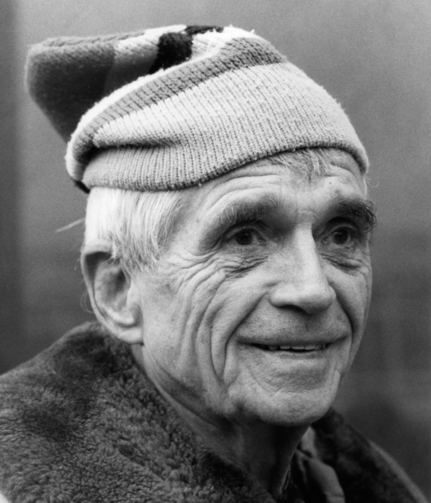 As the United States became more and more embroiled in the Vietnam War in the late 1960s, the increase in American casualties was paralleled by an increasing number of citizens protesting the war. Among the protesters were two Catholic priests who stood out in their black suits and Roman collars: Philip Berrigan, S.S.J., a member of the Josephite order, and his older brother Daniel, who belonged to the Society of Jesus.

At Play in the Lions’ Denby Jim Forest

Both brothers believed that killing under any guise was wrong and considered the just war theory invalid. In 1968, their pictures appeared in national newspapers as they, along with seven others, burned A-1 draft files in Catonsville, Md., in protest of the war. On Jan. 25, 1971, their pictures turned up on the cover of Time with the headline: “Rebel Priests: The Curious Case of the Berrigans.”

On Jan. 25, 1971, their pictures turned up on the cover of Time: “Rebel Priests: The Curious Case of the Berrigans.”

Daniel Berrigan, S.J., is the subject of Jim Forest’s stirring biography, At Play in the Lions’ Den. Covering his life from his birth in 1921 in Minnesota to his death in 2016 in New York City, this book offers a portrait of Daniel Berrigan as a man committed to following the Gospels no matter the personal and professional cost.

Berrigan was a professor of theology and Scripture and a poet whose work was inspired by Gerard Manley Hopkins, S.J., and Wallace Stevens, among others. Berrigan received the prestigious Lamont Poetry Prize in 1957. But he gave up a life as an academic and a literary celebrity to become a convicted felon protesting the culture of death, beginning with the Vietnam War and continuing through the Gulf War, the Kosovo War and the wars in Afghanistan and Iraq. He also destroyed instruments in nuclear missile facilities, protested against abortion and euthanasia and co-founded peace groups like Catholic Peace Fellowship, Clergy and Laymen Concerned about Vietnam, the Plowshares Movement and the Kairos Community, which advocated against nuclear weapons.

Father Berrigan’s activism began, in a sense, when he and his brother Philip marched in Selma for black civil rights. But when Philip encouraged him to destroy government property, Daniel hesitated. Then after much soul-searching, Forest suggests, Daniel went along: “I saw suddenly...with the force of light...that I was threatened with verbalizing my moral fiber out of existence.”

In 1967, Daniel Berrigan became the first priest in U.S. history to be arrested for anti-war activism.

In 1967, Daniel became the first priest in U.S. history to be arrested for anti-war activism. His efforts continued for about 45 years, and Forest estimates that Berrigan was arrested hundreds of times. He also spent several years in jail.

Although some Catholics—like Robert Drinan, S.J.—approved of Berrigan’s actions and suggested that burning draft files “may be a dramatic homily against the evils of militarism,” most opposed him, including Baltimore’s Cardinal Lawrence Shehan and writers for Commonweal, Ave Maria and the National Catholic Reporter.J. Edgar Hoover and Cardinal Francis Spellman considered Berrigan an enemy of the state and of the church respectively. Even his two mentors, Dorothy Day and Thomas Merton, disavowed some of Berrigan’s methods, with Merton wondering whether the peace movement was “escalating to self-contradiction.” 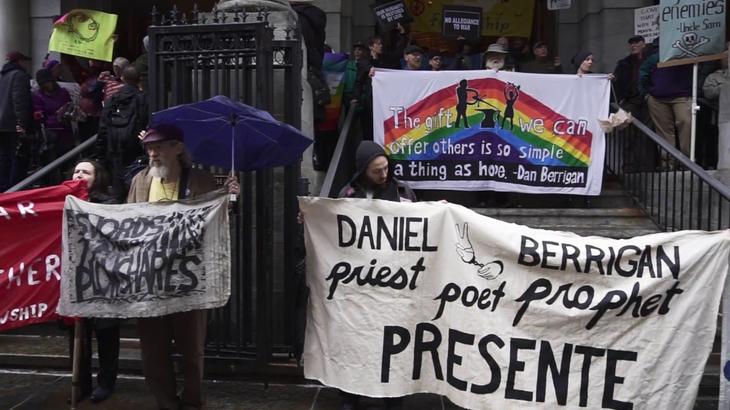 Forest incorporates excerpts from historical accounts as well as observations from Berrigan’s friends. The comments range widely, from the observation by Pedro Arrupe, S.J., superior general of the Jesuits at the time, that “Dan Berrigan is the greatest Jesuit of the century”; to nephew Jerry Berrigan offering this telling insight: “It’s almost like [my uncle] lived right in the heart of God and reported back to us”; to actor Martin Sheen, Berrigan’s protégé and friend, noting how he made protest human and down to earth. Sheen would later support the International Campaign to Abolish Nuclear Weapons, which recently won the 2017 Nobel Peace Prize.

Forest, a peace activist, friend of the Berrigans and author of previous biographies of Thomas Merton and Dorothy Day, includes passages from Berrigan’s articles, poems, essays, plays (including “The Trial of the Catonsville Nine,” based on the actual trial) and letters (including to and from his brother). Forest’s discursive style is occasionally hard to follow, but photographs and a chronology (partly compiled by Berrigan’s friend, Father John Dear) help to keep the narrative on track.

As Berrigan became more of a political activist, he wrote numerous books arguing against war as well as several commentaries about biblical figures. His poetry became more prose-like and more political. His poems were also charged with searing honesty—if not grace.

Take these lines from Father Berrigan’s poem, “Children in a Shelter,” written about his trip (with Howard Zinn) to Vietnam in 1968 to bring home three American POWs:

Some critics have suggested that Berrigan threw away a prestigious career as a Catholic writer whose work was on a par with Flannery O’Connor and Thomas Merton to write against war. But in this insightful and inspiring biography, Forest suggests that Daniel Berrigan lived his poems, that his metaphors became stepping stones (and rocks) on the difficult path he chose.

Diane Scharper teaches poetry and memoir for the Johns Hopkins University Osher Program. She is the author of several books including Radiant, Prayer Poems.