What would Thomas Merton and Daniel Berrigan say about the Benedict Option? 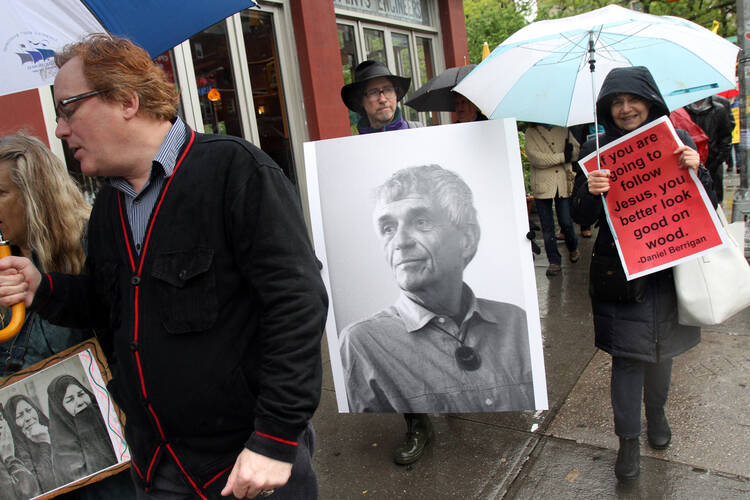 Mourners participate in a peace march May 6 prior to the funeral Mass of Jesuit Father Daniel Berrigan in New York City, May 6, 2016 (CNS photo/Gregory A. Shemitz).

When the theologian William Stringfellow moved to Block Island, R.I., in 1967 with his longtime partner, the poet Anthony Towne, they named their new home “Eschaton,” or the Last Day, “because eschaton means the end of the world coinciding with the beginning of the world as the Kingdom of God.” The home does indeed have an otherworldly quality to it, located high atop a bluff on a sparsely populated island. During the winter, the wind-whipped environs and low stone walls are reminiscent of the Aran Islands, where generations of Irish monastics prayerfully endured harsh conditions in what surely seemed to them the end of the world.

Indeed, Stringfellow biographer Bill Wylie-Kellerman has associated the move to Eschaton with Stringfellow’s own monastic yearnings. “To ‘step off America,’ onto the ferry, and then enter their Island home,” Wylie-Kellerman wrote, “was to shed the anxieties of time-driven existence, to enter a rhythm of prayerful freedom.” That fuga mundi, a “flight from the world,” has been part of the Christian tradition since the Desert Fathers imitated Jesus’ scriptural example in the earliest centuries of Christianity, and it persists today. Witness Thomas Merton, in The Seven Storey Mountain, relating the moment he entered the Abbey of Gethsemani: “So Brother Matthew locked the gate behind me, and I was enclosed in the four walls of my new freedom.”

Merton’s popularity and social activism would ironically lead him outside Gethsemani’s walls many times over the years, and he hosted a retreat at the abbey in 1964 for a number of civil rights and antiwar activists, including Daniel Berrigan, S.J. Six years later, Berrigan would lead the F.B.I. on a four-month chase after going underground to delay his imprisonment for the Catonsville Nine action, when he and eight others burned draft cards with napalm in protest of the Vietnam War. Berrigan was finally caught on Block Island (Stringfellow and Towne had been sheltering him at Eschaton) by F.B.I. agents posing as birdwatchers; the photo of two stern agents leading away a smiling, handcuffed Berrigan is now an iconic symbol of the anti-war movement.

Berrigan would return to Eschaton regularly over the years, and eventually painted a poem on the wall of the back cottage where he stayed: “Where this house/ dares/ stand/ at Land's End/ and the sea/ turns in sleep/ ponderous menacing/ and our spirit fails and runs/ —landward seaward askelter—/ we pray You/ protect/ from the Law’s/ clawed/ outreach/ from the second death/ from Envy’s tooth/ from doom’s great knell/ All/ who dwell here.”

The three men—Stringfellow, Merton and Berrigan—were some of our nation’s harshest critics in the 1960s, not just for America’s wars but for its obsession with idols: money, power, sex, personal autonomy and more. Stringfellow was the least well-known of the three but perhaps the sharpest judge, profoundly critical of a culture he saw as decadent, obsolescent, “a fallen nation,” a “demonic principality,” one superficially Christian and yet endlessly trivializing of the Bible.

A monk’s vocation is toward God, not a strategic retreat from something else.

Their witness and writings came to my mind numerous times over the last few weeks as various American Christian pundits from across the theological spectrum have debated the need for a new Benedict Option, a retreat (in part or in full) from mainstream culture to more monastic settings where an authentic, orthodox Christianity can be preserved from the corruption and hostile secularism of contemporary American culture. What would, I wonder, these three Jeremiahs have added to the debate?

For Merton and Berrigan, I think the answer is fairly straightforward: however long one might need to go away and rest awhile, for them the vocation of most Christians is to participate in the saving work of God, not just in prayer but in other forms of direct action and life “in the world.” After all, no matter what some of their clueless fans might think, a monk’s vocation is toward God, not a strategic retreat from something else. But it is the acid Stringfellow whose answer is the most surprising, because this ardent critic of both U.S. culture and mainstream Christianity, author of the tellingly titled An Ethic for Christians and Other Aliens in a Strange Land, did not truck with escapist impulses among his peers. In 1967, the very same year he moved to Eschaton, he wrote the following:

If they honored the Bible more highly, they would appreciate that the Word of God will endure demythologizing, that the Word cannot be threatened by anything whatever given humanity to discover and know through any science or discipline of the world…. More than that, if the fundamentalists actually took the Bible seriously, they would inevitably love the world more readily, instead of fearing the world, because the Word of God is free and active in this world and Christians can only comprehend the Word out of their involvement in this world, as the Bible so redundantly testifies.

So much for the fuga mundi. Stringfellow, like his fellow critics, might have profoundly distrusted many parts of the cultural world in which he lived, but it did not stop him from loving it.

James T. Keane, a former associate editor at America, is an editor at Orbis Books in Maryknoll, N.Y.

Benedict's option was "Ora et labora". In the 6th century labora was agricultural and the Benedictine impact with their reverential and innovative methods was widespread. But they also exemplified the irreplaceable significance of "ora". Circumstances can limit ones labora today in terms of social impact; circumstances can never limit the importance of ora. "Pray therefore the Lord of the harvest to send laborers..."

I am 69. In the late 60s and early 70s I was active in the peace movement and a fan of Merton and the Berrigans. I still am. However, I am less judgmental than before of other paths to God or interpretations of the Gospel, less willing to say what Christ demands other than to love others as ourselves (or as God does).

I am 69. In the late 60s and early 70s I was active in the peace movement and a fan of Merton and the Berrigans. I still am. However, I am less judgmental than before of other paths to God or interpretations of the Gospel, less willing to say what Christ demands other than to love others as ourselves (or as God does).