Is democratic policing the answer to law enforcement abuses? 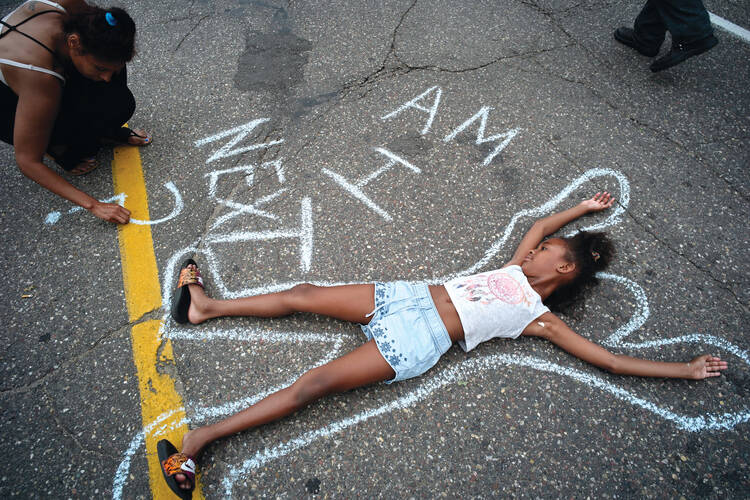 In this July 7, 2016 photo, Tia Williams and her daughter Aissa create a display on the street outside the Minnesota governor's official residence in St. Paul, Minn., as people gathered to protest the shooting death of Philando Castile by police (Richard Tsong-Taatarii/Star Tribune via AP)/Star Tribune via AP).

In Unwarranted: Policing Without Permission, Barry Friedman has taken on a monumental task—to fix the broken relationships between law enforcement agencies and the communities they serve. At first blush, it may seem odd to describe a book about law enforcement in relational terms. This conception of the book’s lesson is appropriate, however, for Friedman’s thesis is that the community being policed must predetermine the proper use of police powers. The dysfunctions seen in the execution of policing are largely failures of the public to properly exercise their role in this relationship. Unwarranted is a powerful call for what Friedman terms “democratic policing.” It would require people to take responsibility for policing ex ante (before the fact). Calling for democratic institutions to exert proactive control over policing policies is simple in theory; its application will undoubtedly prove to be more difficult.

Unwarranted is principally a collection of stories, carefully selected to illustrate important deficiencies in our current system of policing. A couple spending their 40th wedding anniversary being searched on a highway, a young black man arrested at the airport for fitting a “drug courier profile” and a reservist in the Air National Guard whose home was invaded and whose electronics were confiscated—these are some of the characters in the true stories Friedman uses to describe the state of policing today. Though they are anecdotes, Friedman must use these case studies to paint a tapestry of police practices in part because hard data is unavailable for many relevant police activities. In Unwarranted each story introduces a relevant topic to the reader before that topic is tied together with discussions of history, civics and political science. Each highlights the failings of a particular police practice. Friedman exposes the common threads that weave together some of the most problematic law enforcement practices, from mass surveillance in the name of antiterrorism, through the more mundane warrantless searches and seizures of persons and property, to police shootings of unarmed suspects.

Friedman does not identify these policing problems to demonize the police. Far from it. While the abuses by individual officers and whole departments are not downplayed, Friedman places the blame for deficient policing practices on the legislatures, the courts and, more importantly, on the public.

Friedman’s critique is with the current system we use to determine appropriate police practices. Under this system, we use a combination of deference to police agencies in establishing current best practices, and post-hoc evaluations of police practices through citizen review boards, lawsuits and judicial decisions. This system has led to a host of horrors, including: body cavity searches of people during routine stops, conducted without probable cause; swat team invasions of the homes of innocent persons; concussion grenades thrown into the playpen of an infant; massive unwarranted electronic surveillance; the use of drones to spy on entire cities; and a virtual epidemic of police shootings. Unwarranted does an excellent job convincing the reader of the bankruptcy of the current method of determining how law enforcement personnel should properly police their communities. Legislatures have shown little inclination to curb law enforcement misconduct. Courts have been too solicitous of law enforcement justifications for the most abhorrent behavior. If we expect law enforcement personnel to do their jobs properly, radical change is necessary.

If we expect law enforcement personnel to do their jobs properly, radical change is necessary.

In recent years, relationships between law enforcement personnel and the communities they police have deteriorated significantly. This is particularly true in minority communities. Unwarranted calls for a sea change in the form of democratic policing. In proposing this model as solution, Friedman sounds more hopeful than convincing. There is little doubt that people should be concerned about the behavior of police and whether their policies are sufficiently direct and clear so as to respect and protect individual liberty, privacy and bodily integrity. Little, however, supports his proposition that involving the public in the articulation of police policies will result in greater protection of these interests. Having spent the better part of two decades representing people on death row, I have witnessed some of the ugliest manifestations of majoritarian views concerning how police should interact with criminal suspects.

Friedman recognizes that democratic control over policing has led to some of the greater abusive police practices. This should come as no surprise, as the “tyranny of the majority” was one of the great fears of the framers of the Constitution and one of the reasons our system is a constitutional republic and not a pure democracy. The Catholic reader will recognize the majority’s failure to protect individual and minority rights as a failure to embrace the principle of solidarity, which abhors injustice and inequality while demanding respect for the rights and dignity of each human being.

Lack of solidarity also results in judges’ being too willing to uphold the power of the state when violating the dignity of the individual, who is usually poor and too frequently a member of a minority. Neither the majority nor the current judiciary see themselves in the poor, the minority, the target of police oppression or surveillance. It is unlikely that we can change that perception in the majority, for it is inherently a majoritarian viewpoint. But it is not inherent to judging. If we change the process that leads to judicial selections, we may change judges’ abilities to respect the rights and dignity of the poor and the minority in cases before them.

Friedman challenges those who would criticize democratic policing to offer alternatives. One possible alternative is to change whom we consider qualified to serve as judges. Currently, the federal judiciary is overwhelmingly composed of judges who were either prosecutors or civil lawyers representing wealthy clients. They feel no solidarity with the poor because they do not know the poor. Lawyers, professors and the American Bar Association should demand that before any judicial position is filled, one candidate is considered whose clientele was significantly or exclusively composed of poor people and minorities. Lawyers who have represented the poor and minorities against powerful opponents will find it easier to uphold the rights of those persons when they are before the courts. Most members of the legal profession understand that some of the most highly intelligent, ethical and compassionate lawyers in this country have spent their careers representing the poor. Yet these same people are rarely considered for judicial openings. Considering one such candidate for each position would increase their representation on the bench. While this change would not eliminate the need for people to be engaged in proactive policing, it might provide a more viable protection for the least powerful among us.

Emmett Till: the lynching that shook the conscience of the world
Shannen Dee Williams

In the Epilogue to Unwarranted, Friedman identifies recent police shootings and their aftermath as generating some hopeful responses and calls for changes in policing. This is a poignant place in Unwarranted, in which the author identifies how events overtook the writing of Unwarranted and made the issue of controlling police practices more relevant and imperative to the majority of Americans. Friedman, of course, could not have known at that time that these same events would be used in the presidential campaign as political fodder, and that the man who would become president rejected any critique of police practices. Subsequently, Attorney General Jeff Sessions has stated that the Justice Department will stop monitoring “troubled” police agencies and will “pull back” from lawsuits against police departments accused of violating the rights of minorities. Little criticism followed this announcement, for fear and prejudice often overcome the crowd’s better angels. This coda to Unwarranted’s epilogue highlights the problem of trusting democratic policing to protect the rights of poor individuals and minorities.

Unwarranted is a timely book that provides great insight into the problems of policing. The public has a vital role to play in determining solutions. However, perhaps the greatest role the majority can play is to recognize the importance of empowering judges who embrace solidarity with the poor.

This article also appeared in print, under the headline “Is democratic policing the answer to law enforcement abuses?,” in the June 12, 2017, issue.

Michael P. O’Connor is a professor of law at the University of La Verne College of Law in California.