Emmett Till: the lynching that shook the conscience of the world 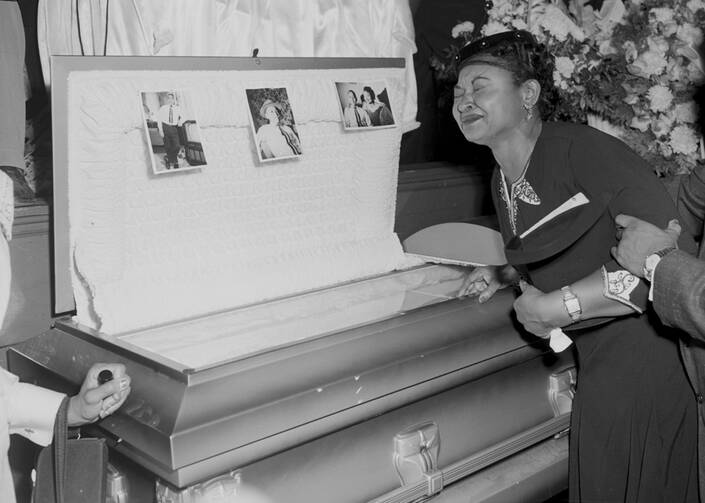 In this 1955 file photo, Mamie Bradley, mother of Emmett Till, pauses at her son's casket at a Chicago funeral home.

Before there was Trayvon Martin, Rekia Boyd, Tamir Rice and Michael Brown Jr., there was a 14-year-old boy from Chicago named Emmett Louis Till. Save for the assassination of the Rev. Dr. Martin Luther King in 1968, no hate murder had a greater impact on the 20th-century struggle for African-American freedom than the lynching of Till in Money, Miss., in 1955. Indeed, the image of Till’s mangled body, which circulated widely in the African-American and global press, became one of the most powerful symbols of the uncompromising savagery of white supremacy in the United States. However, critical details surrounding Till’s brutal murder and its aftermath have been unavailable until recently.

The Blood of Emmett Tillby Timothy B. Tyson

In The Blood of Emmett Till, historian Timothy Tyson offers an invaluable re-examination of the infamous lynching and its impact on the modern civil rights movement. He does this, in part, by drawing on new evidence, including the once-lost transcript from the Till murder trial and the only interview given by Carolyn Bryant, the white woman in whose name Till was killed and who spoke with Tyson in 2007. Although Till was not the first or last black child to be killed by white supremacists, his mother’s courageous insistence on an open-casket funeral in Chicago and the subsequent acquittal of his killers—who later confessed to the murder—radicalized a generation of African-Americans fighting for democracy and equal rights. It also ensured that future generations of African Americans would know Till’s name and the basic story of his fatal encounter with Jim Crow segregation.

Till's mother’s courageous insistence on an open-casket funeral in Chicago and the subsequent acquittal of his killers radicalized a generation of African-Americans fighting for democracy and equal rights.

As Tyson successfully demonstrates, however, critical pieces of the Till story were sometimes carefully constructed misrepresentations of more complicated truths. Regarding Carolyn Bryant’s court testimony, it was willful perjury and a gross exaggeration of the initial account she gave about her brief interaction with Till in her family’s grocery store. Indeed, when Bryant’s husband and brother-in-law forcefully entered the home of Till’s relatives in East Money in the early hours of Sunday, Aug. 28, 1955, they asked for the boy from Chicago “who did the smart talking up at Money.” But when 21-year-old Bryant testified under oath in court less than a month later, she said that Till had not only verbally insulted her but also grabbed her around the waist and attempted to rape her.

In this masterful retelling of the Till saga, readers will especially appreciate Tyson’s inclusion of the backstories of the case’s major players and the segregated communities that produced them. Of the baseball-loving boy affectionately called “Bobo,” Tyson reminds us that Till would not have been completely unaware of the dangers of Jim Crow apartheid before taking the train down to Mississippi to visit his maternal relatives that fateful summer. Indeed, the black Chicago community that mounted a global campaign to secure justice for Till’s family had endured decades of white supremacist terror and de facto segregation in the North. In Till’s grand-uncle Mose Wright, readers will not discover some long-suffering old man broken down by Jim Crow, as some accounts have suggested. Nor was Wright’s court testimony against Bryant’s husband and brother-in-law his first act of courage. In fact, Wright was a well-respected minister and sharecropper, who slept in his car armed with a rifle leading up to the murder trial to protect himself from repeated white threats against his life.

Far from being an isolated act of domestic terrorism in the Jim Crow South, Till’s lynching, as Tyson meticulously illustrates, was part and parcel of a well-organized campaign of white resistance to the U.S. Supreme Court’s historic desegregation ruling in Brown v. Board of Education (1954). Massive resistance, as it came to be called, unleashed an especially violent wave of social, political and economic terror on black Southerners. This movement gave the green light to Till’s lynchers and then exonerated them. It also showcased an inherently violent and immoral culture in which Southern white newspaper editorialists and everyday citizens alike could unashamedly excuse the guilt of Till’s white male murderers and blame Till and black Chicago for his death all in the same line.

Although The Blood of Emmett Till does not include the gut-wrenching image of Till’s body, Tyson’s description of Till’s hours-long beating and mutilation and his repeated screams for mercy and for his mother, which woke several African-American witnesses, will shake 21st-century readers to their core. So, too, will Tyson’s recounting of the discovery of Till’s naked body in the Tallahatchie River three days after his kidnapping and the multiple attempts made by white authorities to bury Till’s body (and the truth it told) in Mississippi without his mother’s permission. That Till’s lynchers and their numerous supporters never wanted his body to be seen demonstrates they understood that it revealed a great deal about their own inhumanity and nothing about Till’s alleged insult.

That Till’s lynchers and their numerous supporters never wanted his body to be seen demonstrates they understood that it revealed a great deal about their own inhumanity.

In addition to paying special attention to the backstories of Till’s mother, Mamie Till Bradley and Carolyn Bryant, The Blood of Emmett Till must be applauded for illuminating a host of other women who have long stood in the shadows of the Till case. They include Eula Lee Morgan, the alcoholic and pistol-toting mother who nurtured Till’s lynchers in an overtly racist and violent family. There is also the deeply religious Alma Carthan, who, like her daughter Mamie, “made the Earth tremble” in black Chicago upon receiving news of her grandson’s kidnapping in her native Mississippi.

Tyson also showcases the lesser-known, but equally courageous, actions of Elizabeth Wright, Mose Wright’s wife. Indeed, it was Till’s grand-aunt who rushed to try to wake Till and usher him into the darkness of the cotton fields before his armed killers forcefully entered her home. Knowing what only black women can know, Elizabeth was also the first person to fear the worst. In addition to offering Till’s murderers money to spare him from their wrath, Wright immediately sought help for her grand-nephew following his kidnapping.

While this book succeeds in highlighting the agency of black women in Till’s defense, it hesitates to interrogate and indict fully the agency and violence of Carolyn Bryant (and Southern white womanhood more broadly) in Till’s death and the miscarriage of justice that permitted 12 white male jurors to acquit Till’s killers in the explicit name of white supremacy. This reluctance is telling considering Bryant’s admitted perjury and the disingenuous parts of her 2007 interview, which Tyson notes. Bryant’s selective amnesia about details that would further implicate her in Till’s kidnapping and murder is also glaring and casts serious shadows over the sincerity of her motives in 2007. Nevertheless, The Blood of Emmett Till once and for all confirms what most African-Americans have always known about Bryant’s brief encounter with Till and what the elderly Bryant finally confessed: “Nothing that boy did could ever justify what happened to him.”

The problem of mass incarceration is more complicated than we thought.
Alex Mikulich

Despite some other missed opportunities, including Tyson’s failure to explore fully the role of religion in massive white resistance, The Blood of Emmett Till is a timely and necessary book.One cannot begin to understand the current deterioration of American race relations without confronting the enduring realities of white supremacy present in the Till case. These include the relentless criminalization of black and brown communities, the rapid resegregation of the nation’s public schools, and the enthusiastic support that most white Christians and white women have given to Donald J. Trump’s presidency.

One cannot begin to understand the current deterioration of American race relations without confronting the enduring realities of white supremacy present in the Till case.

It will be essential, however, to remember that America is not simply “still killing Emmett Till,” as Tyson proclaims in his epilogue. It is also still exonerating Till’s lynchers, giving enormous platforms to their lying spouses, absolving the segregated communities that produce them, and steadfastly ignoring the pleas of black mothers like Mamie Till Bradley and the black communities behind them still warring for the soul of America.

This article also appeared in print, under the headline “Emmett Till: the lynching that shook the conscience of the world ,” in the May 29, 2017, issue.

Shannen Dee Williams is an assistant professor of history at the University of Tennessee at Knoxville. She is working on the manuscript for her first book, Subversive Habits: The Untold Story of Black Catholic Nuns in the United States.