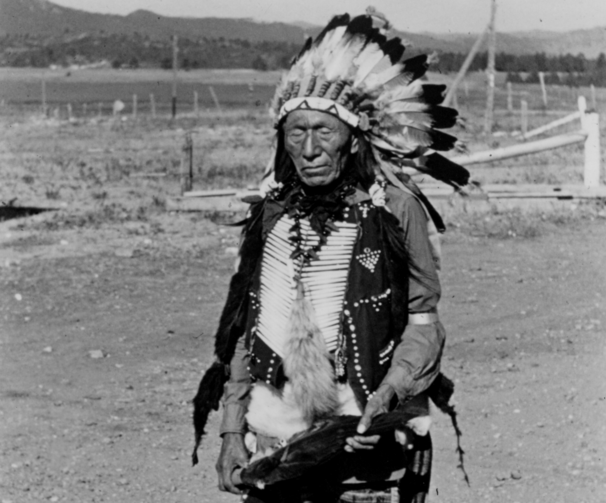 The true ordeal of the Teton Lakota, the warrior tribe that whipped the U.S. Cavalry in several notable fights in the 1870s, began after the shooting stopped. Worse than the persistent hunger was the federal effort to “civilize” the Indians by stages into hat- and trouser-wearing farmers with one wife, Christian first names, fixed last names and children who learned English in school. But the authorities had one aim above all others—to end the ancient practice of smoking a traditional pipe with a mixture of tobacco and the inner bark of the red willow before calling out to the ultimate power behind all things addressed by Lakota as Tunkashila. The Lakota resisted all of these changes but clung to nothing more tenaciously than the pipe.

The Oglala holy man and healer known as Black Elk once said that Lakota used tunkashila, which means grandfather, as a sign of respect and intimacy. The word, with the accent on the second syllable, is not the name of God, who has no name in traditional Lakota religion but is simply described as Wakan Tanka, translated by convention into English as Great Spirit. But wakan is a heavily freighted word. It means spirit in the sense of immaterial, large, eternal and everywhere, but it also means ancient, unknowable, mysterious and powerful.

The Lakota wakan tanka in some particulars resembles the traditional Judeo-Christian-Muslim god—knows everything, is the source of everything, can be reached by prayer—but was held in suspicion by the Christian churches that established themselves on the Lakota reservations in South Dakota. To defend the primacy of the Bible the churches persuaded the federal authorities by the early 1880s to impose a Code of Indian Offenses with reservation courts to try, convict and punish offenses that were all religious or cultural in nature. Outlawed for the next 50 years were the sun dance, traditional medicine, use of a sweat lodge for purification, plural marriages and dispersal of personal property at death in a ceremony known as a giveaway. Officials intended to extinguish every aspect of Indian culture root and branch, starting with native languages.

Both witness and victim of this long ordeal was the Oglala Black Elk, who took the Christian name of Nicholas, became a Catholic in about 1904 and served as a catechist until 1930, when his life took a dramatic turn recorded by Joe Jackson in a book that is not only an exhaustive biography but the best account we have of what it meant for Northern Plains Indians to watch their children stripped of everything their fathers had believed. Both sides of this story are included—the religion Black Elk tried to preserve, and the battle for his allegiance waged by Jesuit priests who felt betrayed by his late-life return to the old ways.

The struggle began in 1930 when Black Elk at 67, fearing that traditional pipe religion would die with him, elected to tell the Nebraska poet John Neihardt about the central religious experience of his life—an elaborate vision he had experienced when he was 9 years old. Neihardt devoted the longest chapter of his book, Black Elk Speaks, to this vision, which has poetic splendor but is not easily summarized. At the heart of it is an account of the religious crisis faced by the Lakota people and of the charge placed upon Black Elk personally by the Six Grandfathers to restore the sacred hoop of life and the flowering tree at its center. Black Elk described all of it in a non-stop, three-week interview with Neihardt. Just as remarkable was Neihardt’s effort to record the vision faithfully.

When Black Elk Speaks was published in 1932 the holy man’s vision was the big central thing, followed by a more conventional account of his role in the major episodes of Oglala Lakota history, from his birth in 1863 through the massacre known as Wounded Knee in 1890. New to the story is Jackson’s account of Black Elk’s season with Buffalo Bill’s Wild West show in Europe 1887. After missing the boat home, he lived in France for a year, falling in love and fathering a child.

About Black Elk’s life after the massacre at Wounded Knee Neihardt had almost nothing to say. The holy man’s Catholic daughter, Lucy Looks Twice, and his Jesuit friends were hurt and angry to find not a single word about Black Elk’s 25 years as a catechist and winner of souls—at least 400 conversions, according to one of the Jesuits he worked with. Near the end of their time together, Neihardt asked Black Elk why he had turned his back on his own religion to join “a white church.” Neihardt’s teenage daughter Hilda was present and later described the old man’s response.

“Black Elk thought for a moment or two,” she wrote, “then he replied quite simply, ‘Because my children have to live in this world.’”

Jackson provides a careful and even-handed account of what happened next. Angriest at the omission was Father Placidus Sialm, a Swiss-born Jesuit who had spent more than half of his life working with the Lakota in South Dakota. He openly dismissed Black Elk as an “ignorant Indian” and launched a clumsy campaign to give the church a central place in the story of his life.

Eventually, Father Sialm went a step too far and Black Elk signaled enough. The moment has been described by Black Elk’s granddaughter, Esther DeSersa, who was present as a child in 1935 one morning when she was home sick from school.

I was at my grandfather’s house, and he was sitting down, getting his pipe ready early in the morning, and here was Father Sialm knocking on the door...he came in, and he saw my grandfather with the pipe. Father Sialm grabbed the pipe and said, “This is the work of the devil!” And he took it and threw it out the door on the ground.

My grandfather...got up and took the priest’s prayer book and threw it out on the ground. Then they both looked at each other, and nobody said one word that whole time.

And then they both went out, and I saw Father Sialm pick up the prayer book, and Grandfather picked up his pipe.... Then they turned around, and they just smiled at each other and shook hands!

Sorting out what Black Elk believed is difficult. The available evidence suggests that at the end of his life he returned to his beliefs at the beginning. Near the end, he told his daughter Lucy and other family members, “The only thing I really believe is the pipe religion.” His son Ben was equally devoted to “the pipe” but considered himself to be a Christian, too. In 1969, after decades spent trying to clarify what he was, Ben told a roomful of school children, “Today it has all merged together, and I feel that I live the one life now.”

But more important than placing Black Elk is what he managed to save. The vision he described for Neihardt, and later amplified for another scholar who came to his door, Joseph Epes Brown, preserves a clear account of a body of religious thinking that officials wanted to scrub from Lakota memory. The old-time Lakota always believed that it was the warriors who would save them. What Black Elk taught his people was to depend instead on something harder to take away than guns, the trust that prayers in their own language, delivered in their own way, would reach the god they addressed as Tunkashila.

This article also appeared in print, under the headline “The Native American Holy Man who did not surrender all to the Jesuits,” in the January 23, 2017, issue.

Thomas Powers, a Pulitzer Prize winner, is the author of The Killing of Crazy Horse, among other books.