Covid, contested democracies and other major global stories to watch in 2022 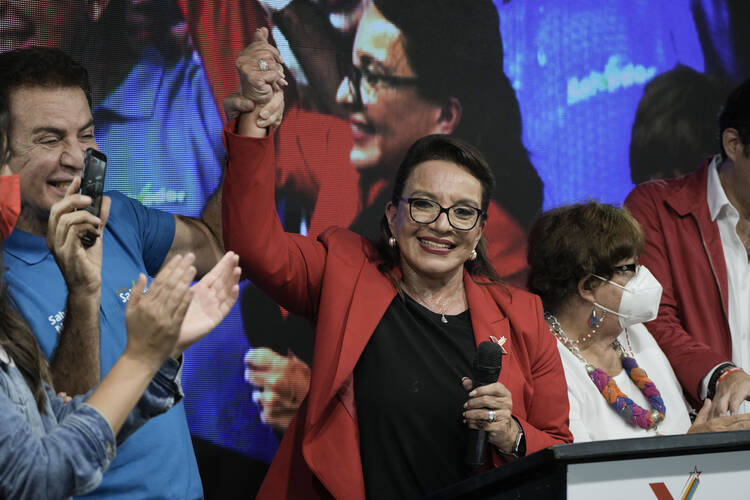 A year that started with a jolt in Washington on Jan. 6 is ending in a deeper Covid muddle in December as the pandemic plods through the Greek alphabet to devastating effect. Covid’s latest iteration, omicron, reached the United States on Dec. 1 and is expected to drive up case numbers across the country during the first weeks of the new year.

Two years into the pandemic, a lot of folks appear to have lost a sense of urgency about Covid-19, but the illness continues to cause casualties around the world. Hardest hit has been the United States, which exceeded 800,000 deaths on Dec. 14 and is again experiencing well over 1,000 deaths a day because of Covid-19.

The Covid crisis, and how the church responds to its long-term impact on life and liturgy, will surely continue to be a major story in 2022. Other U.S. stories we expect to report on next year include the upcoming congressional elections in November, the continuing challenge of refugee resettlement and migration/border issues and the equity and anti-poverty impact of the president’s “build back better” proposals as they are hashed out in Washington.

Our ‘Dispatches’ contributors were kind enough to share some thoughts on what stories are likely to be important in 2022 as we cross off, in some relief, the concluding days of 2021.

But there will be stories worth paying attention to in the new year from outside the United States, too. Our ‘Dispatches’ contributors were kind enough to share some thoughts on what some of those stories are likely to be as we cross off, in some relief, the concluding days of 2021.

Mexico and Central America. Correspondent Jan-Albert Hootsen reports that among the stories he will be watching in the new year from Mexico City will ​​be “creeping militarization and increasing authoritarianism” under President Andrés Manuel López Obrador “as he enters the second half of his term and will likely be working to consolidate, one way or another, his power.”

The shared border between the United States and Mexico will also surely figure in 2022 reporting. “Migration will continue to be the big story in Mexico,” Jan-Albert said, “especially given the Biden administration's reinstating of the 'Remain in Mexico' policies. Catholic migrant activists will likely have to find new ways to advocate for migrant rights.”

He expects that rising authoritarianism in Guatemala and El Salvador will also be important stories in 2022.

“The church has played a major role in opposing creeping authoritarianism in Nicaragua and will likely need to reassess its role in countries where freedom is diminishing rapidly,” Jan-Albert said. The potential inverse of that phenomenon in Honduras will also be a focus next year.

“The church has played a major role in opposing creeping authoritarianism in Nicaragua and will likely need to reassess its role in countries where freedom is diminishing rapidly.”

President-elect Castro is the wife of former Honduran president Manuel Zelaya, who had been deposed in a coup in 2009. She becomes Honduras’ first woman president. Outgoing President Juan Orlando Hernández had been seeking to consolidate power in Honduras under his National Party. He has been linked to political corruption and drug trafficking by revelations in court testimony in the United States.

Europe. In Europe, “the story will be the European Union without Angela Merkel,” Bridget Ryder, who contributes from Spain, told me via email. “Merkel was someone everyone respected and had for a long time been very much a moderate. It will be interesting to see what happens in the E.U. without her, especially as tensions between more progressive and conservative factions have become clear.

“As I wrote in my last piece, there is a clear progressive/conservative rift in Europe right now. Both within individual countries and between European countries, the culture war does seem to be heating up at the same time that the continent is dealing with important issues—from an energy crisis to an intensification of the refugee situation, tensions with Russia and the ongoing pandemic with its attendant issues.”

She added, “It will be interesting, too, to watch what kind of continuing fall-out comes from the French report on sex abuse in the church.”

“Here in Scotland, like almost everywhere else, we end the year really worried about the latest virus variant while trying to remind ourselves that there will be much else to occupy us in the new year,” David Stewart, S.J., writes. “Such has been the frightening speed of the latest variant that there seems little energy left in anyone to look ahead; this has been an Advent like no other.  Yet, pass through Glasgow and you’ll still see signage about COP26 around the city, now pointing towards one exciting ‘win’ following from the conference.

Growing displeasure with the performance of the Conservative Party-led government in London and Prime Minister Boris Johnson is fueling the independence movement in Scotland.

“Plans for the exploitation of a huge, offshore oilfield, the ‘Cambo’ project west of Shetland, will almost certainly collapse; environmental campaigners are finding joy in anticipation of this significant victory,” David said. “At the same time, Longannet, the nation’s last coal-fired power station met its final demise as its giant chimney on the River Forth was spectacularly demolished in December.”

He added that 2022 could be the year of a second independence referendum in Scotland, “for which momentum has been gathering.”

“Without any explicit campaigning on either side of the question, polls are showing that support for ‘Yes’ has been quietly rising.” Growing displeasure with the performance of the Conservative Party-led government in London and Prime Minister Boris Johnson is fueling the independence movement, he said.

A final local great expectation is also noted: “Seeking and finding whatever pleasures we can, Scots have realistic hopes that their international football teams, both women’s and men’s, could thrive in 2022; the men’s international Rugby Union XV will go into the Six Nations tournament as winter ends with a well-founded optimism that is inducing vertigo in their long-suffering supporters.”

Filipe Domingues lives in Italy and writes about Latin America. He’s hoping to keep an eye on both parts of the world in 2022. In Italy, he plans to follow the synodal process both in Italy itself and the church around the world through the filter of Rome.

Filipe told the story of Carlo Acutis, a contemporary saint, in 2021 and would like to do more reporting on saint-making next year. “I am really hopeful that blessed Titus Brandsma will be canonized in October.”

“In Central America, most countries are now being ruled by autocrats who give total freedom of action to big mining and farming. In South America, important countries are facing the same situation.”

South America. Turning to his homeland Brazil, he points out that 2022 will be a presidential election year. The campaign will conclude in October “and all polls show Bolsonaro losing the race in the run-off simulations.”

“I think it is worth following as the pope keeps mentioning nationalisms and populisms... we have to keep our eyes open to extreme right movements in general and see how well they do in elections of countries other than the United States,” he said. “They are surviving in Europe too through the no-vax movements.”

Another regular contributor on Latin America is Eduardo Campos-Lima. Based in São Paulo, Brazil, he also points to the October presidential elections as the big regional event of 2022. “The campaign will only begin in the middle of the year, but in practice it has already started,” he said. “Political polarization will certainly further divide the country, and part of the process will involve religion, given that most of the Evangelical mega churches repudiate the left and support Bolsonaro.

“The Catholic Church will be divided too.” He expects Catholics who are politically and socially progressive to support former president Luiz Inácio Lula da Silva and that socially conservative Catholics “will stick to Bolsonaro or will choose an alternative right-winger.”

In dealing with the election’s inevitable tensions, Brazil’s bishops “will have to show great maturity,” he said, adding that maturity is not a given.

He expects that 2022 in Brazil will also see an intensification of attacks against indigenous and other forms of traditional rural communities throughout Latin America.

“The pandemic somehow increased the agribusiness and other primary economic segments’ greed concerning [extraction of] natural resources,” Eduardo said. “It’s already clear that mega projects involving mining, logging and exploitation of water are growing in the Amazon and elsewhere.” He anticipates that fatal confrontations over land between agents of developers and indigenous people will likely be on the rise.

The viability of democracy throughout the hemisphere will be contested in 2022, Eduardo added. “In Central America, most countries are now being ruled by autocrats who give total freedom of action to big mining and farming. In South America, important countries are facing the same situation.

“The church has been creating new organizations and movements in order to reach the victims of these [industrial or agricultural] processes.” He suspects that a “new form of ecclesial organization” is arising out of older church networks of service and advocacy to indigenous and other vulnerable groups that is stepping up to the urgency of the times. “A water network is being established in Brazil, Paraguay and Argentina, and the network of churches [on] mining is getting more relevant,” he explained.

What else may befall the church and the world during the new year is obviously hard to say, but you can remain assured that the team of editors and journalists that brings you America’s Dispatches each week will be ready to report it. Stay tuned!