Carlo Acutis could become the first millennial saint. Here’s the story behind his first miracle. 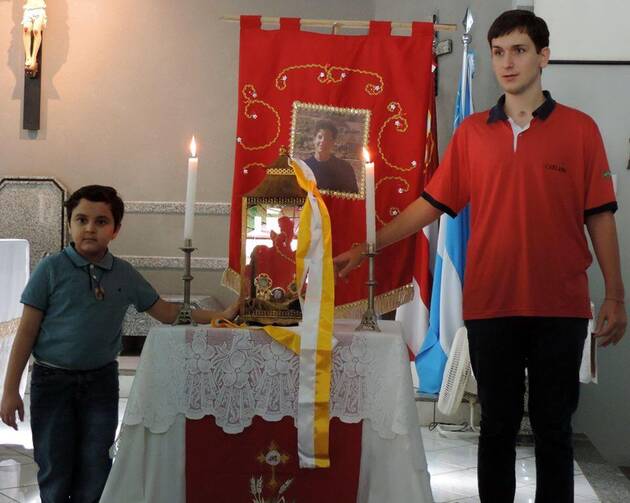 The internet has made Blessed Carlo Acutis globally famous, but it was the very ancient tradition of relic veneration that led to his first miracle in Brazil, clearing the way to the first step toward sainthood for him.

Carlo Acutis is probably the first beatified person to ever go viral. On Oct. 10, he was declared “blessed” by the church during a live-streamed Mass in Assisi, Italy. Images of this potential saint, who wore sweatshirts and sneakers and died so young, had already been circulating on the internet but spread even more rapidly after the Mass, attracting the attention of Catholics and non-Catholics alike.

The story of his first miracle started 10 years earlier, largely because of a diocesan priest of Campo Grande, the capital of the Mato Grosso do Sul state, central Brazil, home to about 800,000 people.

According to church law, a virtuous person needs to intercede in two miracles before they can be declared a saint, except in cases of martyrdom or when the pope lifts such requirements. The first miracle officially recognized by the Vatican as a result of Acutis’s intercession involved the healing of a 4-year-old Brazilian boy who had a pancreas malformation and was on the verge of death.

“That day, Matheus saw the line of people standing to venerate Carlo’s relic and asked me what they were doing. I told him we could pray to Carlo for anything, if we wanted to, because he was in heaven.”

“I learned about Carlo from a godson in 2010, when not many people knew much yet about him, even in Italy. I was delighted by his story,” the Rev. Marcelo Tenório de Almeida told America. Acutis’s beatification process had begun in Milan, where the teenager lived most of his life. He died in 2006, at the age of 15, of leukemia.

Father Tenório contacted the Italian association that produced promotional materials about Acutis and got in touch with his mother, Ms. Antonia Salzano. “She gave me a book about Carlo and gave me permission to talk about him in Brazil,” he said. The pastor gathered a group of volunteers at St. Sebastian’s, his parish in Campo Grande, and began mailing pamphlets about Acutis to other parishes and youth groups all over Brazil.

As the priest grew closer to the Acutis family, devotion to him around the world grew quickly. “Miracles multiplied. Carlo is very fast!” he said.

“The first news we had was in 2011, when a religious sister was cured of cancer,” Father Tenório said, referring to unofficial experiences that the faithful attributed to graces conceded through Acutis’s intercession.

In one of Father Tenório’s visits to Assisi, Ms. Salzano gave him a piece of clothing that had belonged to Acutis. Such relics became key to the exponential growth of the devotion to Acutis, culminating in the first recognized miracle.

Acutis died on Oct. 12, which also happens to be the feast day of Our Lady of Aparecida, Brazil’s patroness. Every year after that celebration, the pastor would expose Acutis’s cloth in a chapel dedicated to Mary. In 2013, then 4-year old Matheus kissed the relic and, according to his mother, Ms. Luciana Vianna, he prayed for healing.

Informally called “patron of the internet” for having published stories of Eucharistic miracles online, Blessed Carlo Acutis is now admired by thousands of Brazilians, young and old.

Matheus was very weak and malnourished. He was almost unable to eat because of his annular pancreas—a rare condition in which the pancreas encircles the intestine or parts of the stomach, preventing proper digestion.

“He used to vomit almost constantly, two minutes after eating anything. We had to give him special formula so that he could retain at least some nutrients,” Ms. Vianna told America. Only a transplant could save the child, but he was too weak for surgery. Doctors told her that Matheus would die before the age of five.

“That day, Matheus saw the line of people standing to venerate Carlo’s relic and asked me what they were doing. I told him we could pray to Carlo for anything, if we wanted to, because he was in heaven. Matheus was on his grandfather’s lap when we approached the relic and, before my dad could touch the relic, Matheus kissed it and said out loud ‘Stop vomiting!’ Many people witnessed this moment,” she said.

According to Ms. Vianna, Matheus would still feel weak for hours, but after this Mass he was unusually joyful—and hungry. When he got home, the boy ate beef and french fries. He did not become sick.

“It was the first time in his entire life that this happened. He had been vomiting after eating since he was born; he even rejected breast milk. Since that day, I knew he was cured because of Carlo. The change was too drastic and too sudden,” she said.

Gradually, Matheus gained weight and when he returned to medical appointments, the change in the morphology of his pancreas was confirmed by an ultrasound exam, according to his mother.

Matheus would still feel weak for hours, but after this Mass he was unusually joyful—and hungry. When he got home, the boy ate beef and french fries. He did not become sick.

“One doctor said that he then had a textbook pancreas, an organ that is so perfect that it looks unreal,” she proudly said. She also mentions that one doctor was surprised that “Matheus’s surgery had left no scars,” even though he had not been through surgery.

Father Tenório learned of Matheus’s inexplicable cure the following year. “I was afraid to tell the priest,” Ms. Vianna said. “But my spiritual director said that Carlo’s miracle did not belong to us, but to the church.” Today, Matheus is 10 years old and lives a normal life.

When Father Tenório saw Matheus’ tests, he reported the facts to the postulator of the beatification cause. The Vatican received the documents in March 2019, after asking for a local church tribunal to be opened in Campo Grande. Matheus’s health records were checked by this court and validated by local doctors. “We had to repeat several exams over the course of a year,” Ms. Vianna said.

In Campo Grande, many thanksgiving Masses were celebrated after Acutis’s beatification, one of them presided by the local archbishop, Dimas Lara Barbosa. Another putative miracle has taken place since then, but it has not yet been analyzed by the Vatican—the healing of 19-year-old Gabriel Terron, who had five heart attacks and seemed destined to remain in a permanent vegetative state, according to his doctors. Mr. Terron is now considered healthy.

Father Tenório explains that even before the beatification, pilgrims from neighboring states were visiting his small parish church. Other priests requested relics to dedicate altars to Blessed Carlo Acutis. “I have even seen bishops carrying Carlo’s picture on them. That was unthinkable some years ago,” he said.

He believes that Pope Francis’ citing Acutis in homilies and in his “Christus vivit” apostolic exhortation was another catalyst of the devotion. Francis said that Acutis is “a witness of Christ for younger generations.”

Ms. Vianna was never “brave enough” to get in touch with Ms. Salzano, Acutis’s mother, she said, although their sons are now connected forever. “I respect her so much. Her son gave his life and through sainthood he saved my son’s life. Only God knows why these wonderful things happen.”

Informally called “patron of the internet” for having published stories of Eucharistic miracles online, Blessed Carlo Acutis is now admired by thousands of Brazilians, young and old. Because of him, a seemingly old-fashioned devotion of relics has intersected with digital evangelization.

“People use the internet to request relics; they want first-degree relics [small parts of his body], but of course we don’t have them and we can’t do this,” Father Tenório said. “When it is possible, we send them by mail informational material, prayers and a piece of cloth that has touched Carlo’s original relic.”

For all new followers of Blessed Carlo Acutis, Ms. Vianna has a clear message: “What most defines Carlo is not being an ordinary young man, in sneakers, carrying a backpack on his back, but his love for the Eucharist. What makes him extraordinary is his love, his unusual love. Carlo brings an explosion of love and liveliness to the church,” Matheus’s mother said.