Catholic sisters (with M.D.s) are on the frontline in the fight against Covid-19 in India 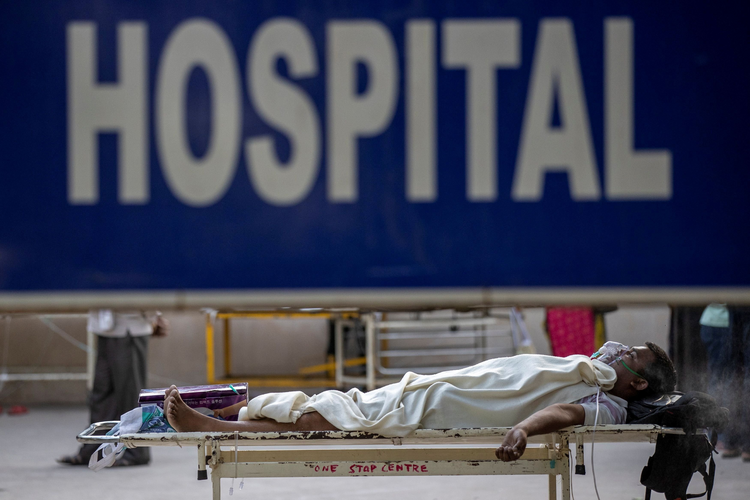 She does not say it directly, but Beena Madhavath, U.M.I., seems quietly proud of the doctors, nurses and support staff of all stripes working with her at Holy Family Hospital in Mumbai, India, marveling at their commitment and stamina as they contend with what has proved to be a devastating second wave of Covid-19.

Mixed with that pride is an obvious concern about exhaustion and burnout. The healers at Holy Family, where Sister Beena serves as deputy director, have been working nonstop for weeks.

“Last year our health care workers had terrible fear of contracting the disease,” Sister Beena says. “They also had resistance from their families,” who were afraid for their safety, “but this year we found there was no resistance…. In this wave they knew what they were facing.”

During this second surge of Covid-19 medical and support teams had no time to be anxious about themselves as scores of patients began arriving at Holy Family’s emergency room doors.

During that first wave, many doctors, nurses and other staff were infected and became ill with Covid-19, Sister Beena says. This time, with most staff vaccinated in March, Holy Family has not experienced its own internal epidemic. “Very few have contracted the infection,” she says.

The vaccinations offer a sense of security, but in truth Sister Beena suspects that during this second surge medical and support teams had no time to be anxious about themselves as scores of Covid-19 cases began arriving at Holy Family’s emergency room doors. “Very sick patients, patients who are gasping,” she says. “Some even were brought to the hospital and by the time they reached the hospital, they were dead.

“We had a very, very terrible time in the month of April in Mumbai,” Sister Beena says. “The demand was too much, but we continued somehow.”

In addition to her administrative duties, Sister Beena is one of Holy Family’s ob-gyn practitioners. During the crisis, she has delivered a number of babies, even cesarean births, with patients who were suffering from Covid-19.

How has she managed the stress and workload herself?

“I find a lot of strength in prayer, my relationship with God,” she says, “and the hope that this too shall pass away.”

People call Sister Beena every day to tell her that they are aware of India’s suffering and praying for her and Holy Family staff. “That itself is very, very consoling.”

She also welcomes “the support and prayers and the encouragement I get from my friends, my family, my own community of sisters and the Ursuline sisters community from across the world who are praying for us.”

People call her every day to tell her that they are aware of India’s suffering and praying for her and her sisters and staff. “That itself is very, very consoling,” she says.

Material help may also be on the way from the United States: Catholic Health Association members met last week with Sister Beena over Zoom for a networking and needs assessment, and Catholic Relief Services reports that it is gathering resources to support more than 50 hospitals in smaller cities through the Catholic Health Association of India. That collaboration will help sustain treatment for more than 100,000 Covid-19 patients, according to C.R.S. The U.S. church’s official relief and development agency will be delivering personal protective equipment kits, medical supplies and disinfectants, and will be providing food for recovering patients and psychosocial support for health care workers.

C.H.A. member Providence St. Joseph Health Foundation is accepting donations to support institutions in Hyderabad, India, and Hospital Sisters Mission Outreach is co-sponsoring another effort, Breath for India. The Catholic Near East Welfare Association has also launched an emergency campaign to rush funds to India to help the local churches respond to the escalating crisis.

In addition to prayers from everyone, that assistance will be heartily welcomed in India, Sister Beena says, as the country now needs “any sort of help.” The health care system is on the verge of a breakdown, she warns.

Holy Family’s 270-bed facility has been just about completely full since the latest Covid-19 outbreak stormed across India in March and April. This month the rate of new cases in Mumbai seems to have plateaued, Sister Beena says.

Conditions in India could not be more grave this week. Multiple states are reporting Covid-19 positivity rates in excess of 25 percent, and daily tallies of more than 350,000 new confirmed cases have become common.

But “I’m not sure how many days it will last,” she says, pointing out that in many other parts of India the outbreak is running completely out of control.

And Mumbai’s “plateau” has not translated into much of a respite for Holy Family’s staff—148 of the 170 beds set aside for Covid-19 patients were occupied on May 6 and the hospital’s 18-bed intensive care unit was at 100 percent capacity, Sister Beena reports. “Every day we have to turn away eight to 10 I.C.U. patients,” she says.

And everyone has a breaking point. Two doctors working in the intensive care unit recently submitted their resignations. They had been dealing with Covid-19 since the first wave back in March 2020, and Sister Beena describes them as emotionally and physically drained.

Conditions in India could not be more grave this week. Multiple states are reporting Covid-19 positivity rates in excess of 25 percent, and daily tallies of more than 350,000 new confirmed cases have become common. The death toll has topped 250,000 and is escalating rapidly. Health care experts around the country estimate that the true toll in cases and deaths is surely much higher.

While shortages of even basic medical supplies have been reported across India, Sister Beena says Holy Family is, at least this week, well supplied with oxygen and personal protective equipment. In Mumbai “we are in a better position than most parts of India,” she says.

She is more concerned about acute shortages reported in other cities and increasingly in India’s rural villages. In addition to her work as director of Holy Family, Sister Beena is president of the Sister Doctors Forum of India, representing 1,000 women religious M.D.s at work throughout India; 80 percent of them are in rural and tribal areas.

She worries that conditions for these sister-doctors are bound to get much worse as the pandemic reaches India’s peripheries. “Last year when we had the first wave, it was limited mostly to the cities where the population density is more, but this time it is spreading to smaller towns and even to rural India.”

Sister-doctors, she says, are frequently single-handedly managing an increasing caseload of Covid-19 patients at their small clinics. They are often bereft of testing equipment, oxygen, essential medicines—even personal protection gear—and face “all sorts of challenges.”

The Catholic Bishops Conference of India is seeking support for its Office for Health Care, which hopes to use the church’s parish network to get medical kits, including pulse oximeters and digital thermometers, and other assistance to rural families struck by Covid-19.

Reports have emerged in recent days of scores of bodies adrift on the Ganges River. Rural communities have run out of wood for cremations and are simply setting loved ones adrift in Ganges waters, according to Reuters.

Mary Anupa, O.S.F., reports that Catholic hospitals and medical clinics all over India are doing their utmost to respond to the crisis. She assists at her convent’s health clinic in the Ramgarh district of Jharkhand state in eastern India.

No Covid-19 patients have been treated there so far, but, she says, local private and government hospitals have been overwhelmed. Her community has suffered illnesses and death because of Covid-19, but many sisters have now been vaccinated. She has been alarmed by the degree of denial she still encounters among the people of her district.

Sister Beena does not expect the tide to turn anytime soon. Everything depends on how quickly Indian health officials can ramp up the nation’s vaccination effort.

“I feel the people themselves could have taken the situation a little more seriously,” Sister Mary says.

“I hear from the people in the villages saying: ‘No virus will attack us.’” Because of “digging in the ground” and poor hygienic conditions that have exposed them to more pathogens, they believe, “We have the immunity power,” she reports in an email to America. “Even if the symptoms are found, they don’t immediately rush to the hospital, rather they wait to see what happens next. If the person is dead, they go to bury.

Because of the nation’s strained resources, people are dying in rural India without ever being tested for Covid-19, Sister Beena says, part of the reason she is not confident in the accuracy of the figures being released by the Indian government.

She does not expect the tide to turn anytime soon. Everything depends on how quickly Indian health officials can ramp up the nation’s vaccination effort.

But, Sister Beena adds, “In two to three months time, if we continue with the vaccination program and Covid-appropriate behavior, we will be able to get Covid under control.”

That would mean her staff may have to continue to work around the clock until late summer. She is already concerned about what might happen if at least 50 percent of the population has not been fully vaccinated when a predicted third Covid wave strikes in the fall.

“In the first wave, most of the people who were not doing well were the senior citizens,” Sister Beena says. “Now it is affecting the adult population; the young people are also becoming critical.

“India needs help from anyone who is willing to help,” she says.