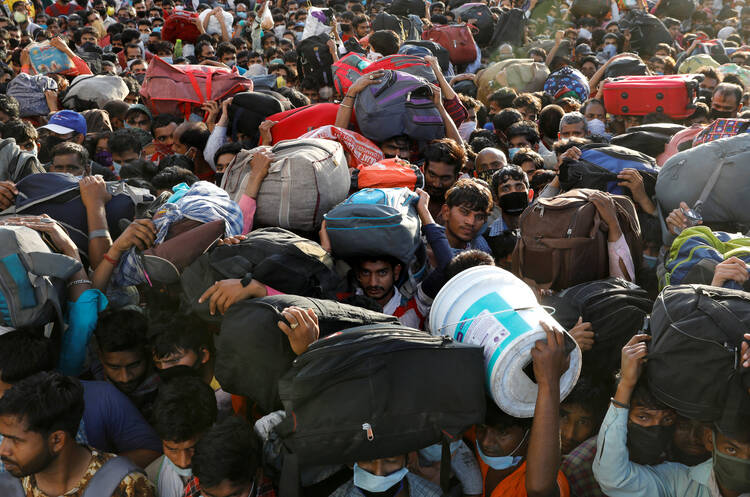 Migrant workers crowd outside a bus station in Ghaziabad, India, on March 28, as they wait to board buses to return to their villages during a 21-day nationwide lockdown to limit the spread of COVID-19. (CNS photo/Anushree Fadnavis, Reuters)

This is the third in a three-part series that included reports from Liberia and Lebanon.

Catholics are a tiny minority in Hindu- and Muslim-dominated India—with about 19 million adherents and just over 1.5 percent of the population—but they have managed an outsized role in health care there. The Catholic Health Association of India represents a network of 2,345 health centers, 647 hospitals, 227 social service societies and 35 nursing schools, serving 21 million people annually across India. It is the nation’s second largest not-for-profit health care provider, after the government system.

Mathew Abraham, C.Ss.R, M.D., who serves as C.H.A.I.’s director general, says the backbone of the network has been the 35,000 religious women who serve as nurses and doctors, assisted by thousands of laypeople all over India. “The majority of our network is mostly in the small towns and villages and the tribal areas where other [health care] facilities are mostly not available, so our clients are among those on the margins,” Father Abraham says. He adds that C.H.A.I. medical centers in the cities serve mostly people from India’s slums, accepting “people of all castes and creeds.”

On March 25, hoping to suppress the spread of the coronavirus, India began the world’s largest lockdown, affecting 1.3 billion people. But the sudden move to close down all but essential services threw millions out of work and began a desperate exodus of migrant and day laborers out of the big cities and into the countryside to their home villages.

“We trust in God—God’s protection, God’s grace—and we keep moving. And that’s what we pray for everyone, that they may be protected.”

The government’s move was unexpected and little prepared for; the abrupt societal shutdown and the exodus it engendered led to an acute hunger crisis and thousands of new coronavirus vectors to contend with. “None of us understood the magnitude of this,” Father Abraham says, until images of millions of people on the move suggested the unprecedented nature of the unfolding crisis.

Father Abraham is still unsure what the impact of this migration will be on the Catholic hospital network and is trying to prepare for the worst. Like other Catholic health providers in the developing world, he is deeply concerned about acquiring protective equipment for medical teams in the C.H.A.I. network and about maintaining reliable supply lines going forward. In the meantime this vast army of now dislocated and unemployed people and their dependents are in increasingly desperate straits. C.H.A.I. members are turning their institutional attention to food and hygiene assistance.

Though reports of Covid-19 cases are escalating quickly, it remains uncertain how badly India will be hit by the pandemic. The Associated Press reports that India recorded its biggest single-day surge in coronavirus cases on May 18, with 5,242 confirmed new cases and 157 deaths. At more than 96,000, India now has the greatest number of confirmed cases in Asia and has suffered 3,029 fatalities.

Father Abraham is pretty confident the numbers he has been hearing represent a significant undercount of the problem. “In India, our testing is not very great,” he says. “We are testing only people who are having some direct exposure or showing some symptoms. Most probably, they have many more cases than you see being reported.”

“We are testing only people who are having some direct exposure or showing some symptoms. Most probably, they have many more cases than you see being reported.”

He worries that India’s public health infrastructure will not prove up to the challenge of a significant outbreak. As an administrator, he has been focused on sourcing protective gear and tracking changes in practices and protocols as network members develop strategies for caring for and quarantining health workers who fall ill. He explains that many health workers belong to communities with elderly religious who will have to be especially protected from exposure.

Still, he describes C.H.A.I.’s medical teams as ready to respond to this latest challenge. “We are religious,” he says. “It’s part of the religious commitment to take chances like this and when we make such choices, we will have to face the consequences.”

He adds, “At the same time, we trust in God—God’s protection, God’s grace—and we keep moving. And that’s what we pray for everyone, that they may be protected. This is a situation where we are struggling with something which really is unknown, [but] we take the chances. We are used to that.”

He says that hospital administrators in India, like their peers in Europe and the United States have the same “challenges and difficulties” when it comes to supply lines and equipment acquisition, “but I think probably we are much more used to hard situations.”

Even in the absence of this pandemic crisis, “we see a lot of people dying otherwise because of tuberculosis, because of malaria, even sometimes we see children dying,” Father Abraham says. He acknowledges a certain fatalism can result but hurries to assure that it does not mean a hardening to suffering. “We feel the pain; we feel the loss; we also see the villagers are angry and sometimes they react, they’re crying…. We have to cope with this situation.”

His frontline workers are primarily members of religious communities who naturally find solace in prayer “where you can share with God what you are going through. Sometimes you have the freedom to even ask him questions, even to be angry with him…. That’s where you get everything off your chest.” And because they live in community, many are also uniquely privileged, he says, to still have access to the sacraments during this crisis while millions of fellow Catholics in India, indeed around the world, remain cut off from them.

He hopes that if the world joins together to confront the pandemic, something good may yet come of it. “This is a situation where everybody is suffering globally, and so we stand in solidarity with everyone, all over the world, [other] Catholics, every human being, because we’re all sons of God,” Father Abraham says. “We stand in solidarity in prayer and action.”