Rich countries could prevent the next India. Will they? 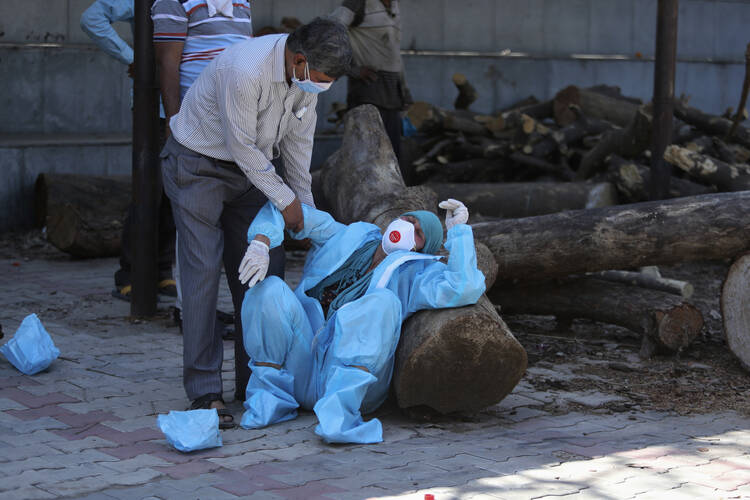 A relative of a person who died of COVID-19 breaks down during cremation in Jammu, India, Sunday, April 25, 2021. (AP Photo/Channi Anand)

Each passing day the Covid-19 outbreak in India seems to produce a new horror, as images of overwhelmed hospitals, exhausted crematorium workers and fields of funeral pyres emerge from this latest pandemic hotspot. Just a few months ago, Prime Minister Narendra Modi had declared that India “beat all odds” against Covid-19. Now a new variant appears to have overwhelmed the nation’s health care system as confirmed cases and Covid-19 deaths reach unprecedented levels.

The speed and virulence of the outbreak have been among its most shocking aspects. Could an outbreak as ferocious happen somewhere else?

Sadly, “the next India could be in so many different places,” said Emily Doogue, a public health specialist for Catholic Relief Services who has been helping to map out the relief and development agency’s Covid-19 response. The same factors that led to the surge in India, Ms. Doogue said, are in play in other nations around the world.

The speed and virulence of the Covid-19 outbreak in India have been among its most shocking aspects. Could an outbreak as ferocious happen somewhere else?

With community transmission continuing across the globe, coronavirus variants are emerging that are proving “more transmissible and more serious; they’re less forgiving.”

Variants have been abetted by human behavior, as governments and the public grow weary of social distancing, mask-wearing and other pandemic restrictions. Throw in “minimal vaccine coverage”—what Ms. Doogue calls “our one major tool to end this thing”—and you have the recipe for the next India-level catastrophe.

Ms. Doogue is especially concerned that southern Africa—where the B.1.351 Covid-19 variant is “showing the most resistance toward existing technology”—could prove the next hotspot. “That’s a place where we feel like we’ve got to speed it up; we’ve got to make sure that we’re using the [vaccine] technology right now, while it remains as effective as it’s going to be.”

With roughly the same population as India and similarly fragile health systems, Africa “must be very, very prepared,” John Nkengasong, the director of the Africa Centers for Disease Control and Prevention, told reporters on April 29.

And African states had relied on India’s Serum Institute for most vaccine deliveries. Now an export ban in response to India’s national crisis threatens “the predictability of the rollout of vaccination programs and will continue to do so for the coming weeks and perhaps months,” Mr. Nkengasong said. The Africa C.D.C. reports that just 17 million doses have been distributed across Africa, a continent of 1.3 billion people.

Officials from the World Health Organization have called on nations with reserves of Covid-19 vaccines to put them to use as soon as possible in Africa.

In a message to the Ibero-American summit in Andorra on April 21, Pope Francis reiterated an appeal that vaccination against Covid-19 be considered a “universal common good.” Remembering the millions who have died or become ill because of the pandemic, he said that Covid-19 has made no distinctions, affecting people of every culture, creed and socio-economic class. “We all know and have felt the loss of someone close to us who has died from coronavirus or who has suffered the effects of the contagion,” he said.

Officials from the World Health Organization have called on nations with reserves of Covid-19 vaccines to put them to use as soon as possible in Africa.

The pope has asked Catholics around the world to dedicate the Marian month of May to prayer for an end to the pandemic.

While most of the world’s attention was focused on the devastation in India in April, other nations reported record Covid-19 cases as well, including Turkey and Iran and, in Latin America, Peru, Uruguay and Argentina. In South America, Brazil may be the nation hardest hit.

On April 29 it became the second country—after the United States—to officially top 400,000 Covid-19 deaths. The last 100,000 lives were lost over just 30 days. April proved Brazil’s cruelest month since the beginning of the pandemic, with thousands dying each day at crowded hospitals. And health experts warn there may be more gruesome days ahead in Latin America as the Southern Hemisphere enters winter.

One new hotspot appears to be emerging in the Middle East. A sudden surge in infections and deaths in the Gaza Strip threatens to overwhelm hospitals weakened by years of conflict and border closures, The Associated Press reports. Gaza’s main treatment center for Covid-19 patients reports that oxygen supplies are dwindling fast. In another hospital, coronavirus patients are packed three to a room.

Gaza’s Hamas political leadership had seemed to have contained the pandemic as other nations struggled. But the decision to lift most movement restrictions in February—coupled with the spread of a more aggressive virus variant and lack of vaccines—has led to a fierce second surge. And many of Gaza’s more than 2 million people have ignored safety precautions, especially during the month of Ramadan. Markets teemed with shoppers buying goods for iftar, the meal that breaks the daily fast after sundown, and few, according to The Associated Press, appeared to wear masks properly, if at all.

Pope Francis reiterated an appeal that vaccination against Covid-19 be considered a “universal common good.”

Another potential global hotspot is not a place but a class of people. Across the world, 80 million forcibly displaced people, including 21 million refugees, are especially vulnerable to a Covid-19 outbreak, according to Joan Rosenhauer, the executive director of Jesuit Refugee Service/USA.

“The vast majority of displaced people live in developing countries, where resources to address the pandemic are limited,” she said, “and they often live in overcrowded camps or urban areas with limited access to health care” and where “‘social distancing’ is not possible,” she said, responding to America by email.

She worries that refugees will be at the end of the line as host countries begin to distribute vaccines. “They often fear coming forward because they lack legal status,” she said. “Discriminatory policies have been established in some countries, like South Africa, and the majority of refugees are in places where access to the vaccine does not exist at all.”

In the meantime, refugee camps have taken emergency preventative measures, closing sites to outsiders and stepping up hygiene and sanitation capacity, but Ms. Rosenhauer warns that much more needs to be done immediately “to protect this very vulnerable population.”

How to tamp down the virus before the next outbreak?

“We’ve got to ramp up [vaccine] production by sharing the materials and also really working on how to make this technology transfer happen,” Ms. Doogue said.

Ms. Doogue suggested the United States and other wealthy nations, now accused of hoarding Covid-19 vaccines, have an important role to play. “It’s our responsibility to get those vaccines in-country and do something about this horrible inequity that we have right now,” she said. “You’ve got one in every 500 people in low-income countries that have received a vaccine. That’s just unacceptable. We can’t continue like that.” At a bare minimum, low-income countries should have enough vaccine reserves on hand, she argued, to allow health care workers and the most vulnerable to be vaccinated, so health systems can continue their life-saving work.

In India, thousands of health care workers have struggled to help the sick and dying in facilities that have run out of personal protective equipment and other basic supplies like oxygen and oxygen cylinders. Ms. Doogue said getting the logistics right on the global staging and distribution of P.P.E. and other essential medical gear and equipment will prove as critical as building up global reserves of vaccines.

The Indian government has been sharply criticized for dropping its guard on the coronavirus, allowing political and religious gatherings to continue, tolerating public backsliding on coronavirus protocols, and failing to ramp up its distribution of vaccines even as it continued to export millions of doses to other nations. For nations wishing to avoid India’s experience, strong political leadership, clear communication and increased vigilance will be the keys to preventing the next Covid-19 surge, Ms. Doogue said.

After experiencing Covid-19 spikes after just about every holiday event that drew families together and encouraged travel this year, political leaders and the public already understand moments of increased risk. “How we typically celebrate some of those events is in community,” Ms. Doogue said, “and that’s when we need to double-down on the messaging that we can’t celebrate in community right now. It’s not in the interest of the common good for us to be together like we’ve always been together.”