‘Pray for the people of India’: a country suffering ‘unimaginable’ Covid-19 outbreak 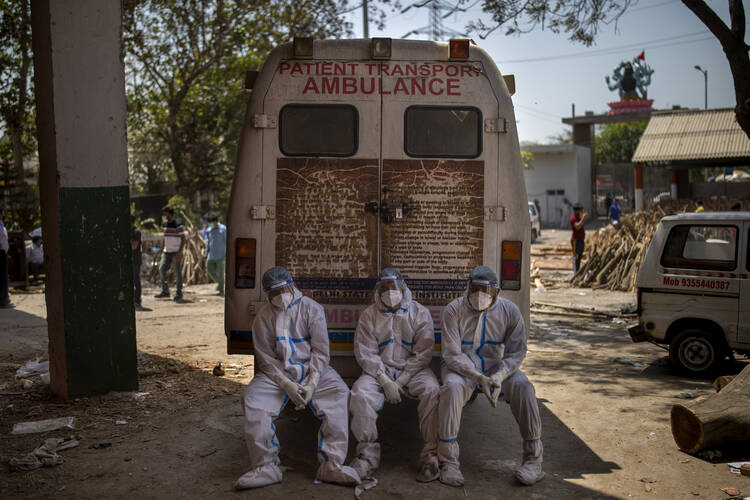 Exhausted workers, who bring dead bodies for cremation, sit on the rear step of an ambulance inside a crematorium, in New Delhi, India, on April 24. Delhi has been cremating so many bodies of coronavirus victims that authorities are getting requests to start cutting down trees in city parks, as a second record surge has brought India's tattered healthcare system to its knees. (AP Photo/Altaf Qadri)

In May 2020, the last time I spoke with Mathew Abraham, C.Ss.R, M.D., the director general of the Catholic Health Association of India, he was profoundly concerned about how well India’s public health system would stand up to a significant coronavirus outbreak. Almost a year later as a second wave of Covid-19 has thrown India into turmoil, I emailed Father Abraham for what I assumed would be a sobering reassessment. Unfortunately, he was unable to speak with me this time. His secretary reported that he was out sick, recovering from his own bout of Covid-19.

Cedric Prakash, S.J., 69, with one dose of the coronavirus vaccine under his belt, has so far managed to dodge Covid-19, but multitudes around him have not been as fortunate. On April 25, the official government tally reported 352,991 new cases of Covid-19, an unprecedented figure likely to be beaten by today’s count as the spread of the virus achieves exponential acceleration.

Father Prakash, a well-known activist and the director of Prashant, the Jesuit Center for Human Rights, Justice and Peace in Ahmedabad, a large industrial city in the Indian state of Gujarat, is certain those numbers represent a substantial undercount of the problem. “The case numbers started going up in January, and then beginning in March, we have had an escalation that no country in the world has experienced so far; they have been unimaginable numbers,” he said.

“We have a massive collapse of the whole [health care] infrastructure,” Cedric Prakash, S.J., said. “Tell people to pray for India as a nation and the people of India; they definitely need prayers.”

Worse, Father Prakash believes the death toll in India—officially just under 196,000—will also prove to be substantially undercounted. A source at a local hospital told him that the actual number of deceased at her institution was 10 times higher than what was being recorded by the government.

The national health system has buckled under the strain of the second wave, and Father Prakash remains mystified and frustrated by the state and national government response. They seem frozen by the scale of the calamity, he said, though health advocates had been warning for months about the peril of a second wave of the pandemic.

“It is a simple, pathetic breakdown of a whole system,” he said, “and of a government abdicating its authority.

“We have a massive collapse of the whole [health care] infrastructure,” he said. “Tell people to pray for India as a nation and the people of India; they definitely need prayers.”

A panic among all classes of Indians is palpable, Father Prakash said. Every hour, he said, “I am getting one or two messages about people who are down with Covid or have just died from Covid.” The virus is cutting across all castes and income groups. No one feels safe from it, and many are falling for scam cures and preventatives being peddled to the unwary by the unscrupulous, according to Father Prakash.

He has been fielding phone calls all week from across India and from family members around the world seeking assistance getting loved ones into hospitals in New Delhi for treatment. “I’m living in Ahmedabad, about 700 kilometers away from Delhi. That means the helplessness is to such a great extent that people are asking anyone, anywhere, ‘Please help us.’”

The national health system has buckled under the strain of Covid-19’s second wave, and Father Prakash remains mystified and frustrated by the state and national government response.

“People are dying from lack of oxygen,” he said. Indian doctors have become so desperate for access to oxygen and oxygen cylinders to keep patients alive, many have resorted to appeals on social media for supplies.

Krishna Udayakumar, the founding director of the Duke Global Health Innovation Center, said it would be impossible under current circumstances for India to keep up with its immediate needs over the coming days. “The situation in India is tragic and likely to get worse for some weeks to months,” he told The Associated Press, adding that a “concerted, global effort to help India at this time of crisis” is desperately needed.

Father P.A. George, the director of the Holy Family Hospital in New Delhi, told Catholic News Service, “The situation is very bad. No beds available anywhere in the hospital.” Though the hospital has a limit of 340 beds, it is accommodating nearly 400 patients.

Calling conditions a “disaster beyond the imagination,” Father George said that “patients are on the corridors and many are dying because no beds, no oxygen.... Patients are just dying in front of my eyes. [I am] feeling so distressed and frustrated and helpless.

“Please pray to God [to] give us strength to save some lives.”

In Ahmedabad, ambulances filled with corpses wait for hours to deliver bodies to crematoriums, which are working at maximum capacity, Father Prakash said. Multiple bodies are being burned together on funeral pyres.

Father Prakesh reports that in his diocese nine priests and two women religious have been lost to Covid-19 just in April. The deceased clergy include four Jesuits, one of whom was the community superior, Jerry Sequeira, S.J., who passed on April 18. The local Catholic cemetery has been closed to Covid-19 burials. After waiting for hours for Father Sequeira’s remains to be cremated, he said, most of the Jesuits had to return home, offering impromptu last rites on the crematorium queue. Two remained overnight with the body before Father Sequeira’s remains finally reached the incinerator.

While government officials boasted of Covid-19 vaccine exports around the world, India has managed to fully vaccinate just 1.6 percent of its 1.3 billion population.

But even as the fear rises in the streets, “fake news,” much of it emerging from the United States, continues to discourage many from taking the proper precautions against the continuing spread of the coronavirus, Father Prakash said. Many in India, as in the United States, insist the crisis has been concocted and that mask-wearing and social restrictions regulations can be ignored. “And since this news comes from the United States, many people here treat it as the plain truth.”

Father Prakash lays the blame for the ruinous acceleration of Covid-19 solidly at the feet of Prime Minister Narendra Modi. Like Donald J. Trump in the United States and Jair Bolsonaro in Brazil, Father Prakash says, Mr. Modi never seemed to understand the seriousness of the crisis nor how to address it.

The prime minister lurched from an “irrational” lockdown order that threw hundreds of thousands of urban workers out of the big cities and back to their rural villages last year to more recent decisions meant to protect the Indian economy regardless of the threat. But the decision to lower restrictions and allow large-scale political rallies and religious celebrations to continue has proved disastrous as an apparently new Covid-19 variant burned across the country.

As case numbers and the death toll rise, Cardinal Oswald Gracias, the president of the Catholic Bishops’ Conference of India, offered the church’s full support in “the war against the dreadful Covid-19 situation in the country” on April 25. Cardinal Gracias, archbishop of Mumbai, blamed the escalating crisis on a “lack of planning and lack of foresight.”

Father Prakash pointed out that while government officials boasted of Covid-19 vaccine exports around the world, India has managed to fully vaccinate just 1.6 percent of its 1.3 billion population. Part of the problem, however, can be attributed to patent restrictions and the positions taken by wealthier nations to protect their vaccine reserves and supply lines.

The United States has been criticized as a vaccine hoarder and for preventing the export of materials necessary for vaccine manufacturing to India. The Biden administration over the weekend made some efforts toward responding to those criticisms and the escalating crisis in India.

The White House said the United States is “working around the clock” to deploy testing kits, ventilators, personal protective equipment and oxygen supplies to India. It said it would also make available sources of raw material urgently needed to manufacture Covishield, the Oxford-AstraZeneca vaccine made by the Serum Institute of India.

“Just as India sent assistance to the United States as our hospitals were strained early in the pandemic, we are determined to help India in its time of need,” President Joe Biden said in a tweet.

Pointing out that India’s export of over 66 million vaccine doses had been among the first to reach vulnerable people in over 90 countries, Marc D’Silva, the Asia regional director for Catholic Relief Services, called its current emergency a “dire example of the continued threat posed by Covid-19.”

“Even as an increasingly vaccinated America looks forward to a light at the end of the Covid tunnel, a number of countries in Asia are hitting their darkest periods,” he said in an email. He urged “bold and immediate action” to India’s plight from Congress and the Biden administration. “The global response to the pandemic and its shadow impacts is not moving fast enough,” Mr. D’Silva said.

With reporting from the Catholic News Service and The Associated Press

Correction: Father Prakash is 69, not 84 as originally reported. America regrets the error.