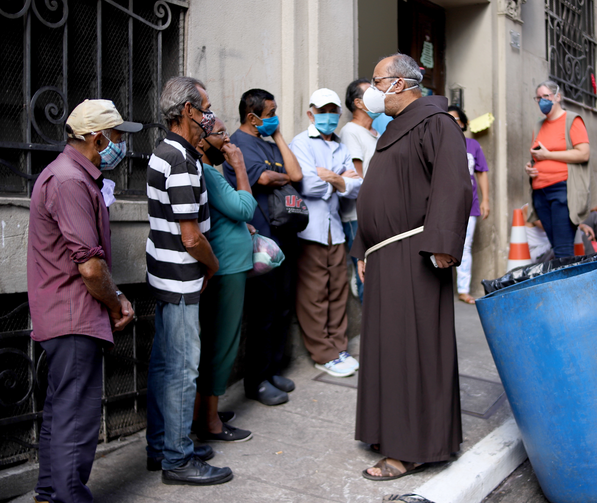 “I’d rather stand in the soup kitchen line than stop paying the rent and become a street person,” said one woman, explaining why she began to visit the tent-kitchens sponsored by the Franciscan Solidarity Service, known by its Portuguese acronym Sefras, in São Paulo, Brazil. Her testimony, shared by Sefras president José Francisco, O.F.M, is just one of the thousands of stories of Brazilians who are falling into poverty—or returning to it—as Covid-19 rages across the country.

“At first, only the most vulnerable were starving, but the hunger queue is growing each day. It’s a hunger pandemic,” Father Francisco said. Sefras works both in São Paulo and Rio de Janeiro among the homeless. It is currently providing 2,800 meals a day, four times more than before the pandemic.

An emergency government aid program had been a final safety net for thousands of families in Brazil as the Covid-19 crisis escalated. Beginning in April 2020, the cash transfers ultimately distributed $20 billion to 66 million beneficiaries, reaching more than a quarter of the Brazilian population by August 2020 and half of all Brazilian families. But that first round of support ended at the end of December.

In Brazil “at first, only the most vulnerable were starving, but the hunger queue is growing each day. It’s a hunger pandemic.”

The result was predictable as municipal lockdowns continued and record numbers of new cases and deaths were reported across the nation. “This is not just about the homeless anymore,” Father Francisco said. “People from other backgrounds are being added to the [food] lines.” He explains that Sefras has long served people who did not qualify for the government’s assistance programs “and those who are in the informal market, who sell stuff in the streets.”

“But now we see entire families standing in line, who may have housing but not enough to eat.”

Bishop José Valdeci Santos Mendes, of the Diocese of Brejo in the northeastern state of Maranhão, heads the social development commission of the Brazilian bishops’ conference. He noted that Roma communities and circus workers, who participate largely in the nation’s informal work sector, are among the communities that have turned to the church for help.

“They need at least $120 [per month per family] or they will starve,” he said. “These people had some informal work, but today they have nothing. In some municipalities of my diocese, 70 to 80 percent of the population depends on government programs.”

He added, “As a church, we have made a commitment to life and we will do everything to show solidarity. Our God is the God of life.”

Internationally known because of his charity work with street people in Brazil, the Rev. Júlio Lancellotti told America that some of the people he now assists lack even the basic tools to cook. “Sometimes they have some food but not the gas; they cook with firewood, with ethanol,” he said. Father Lancellotti is the pastor of St. Michael the Archangel’s Church and the “Episcopal vicar for the street people” in the Archdiocese of São Paulo.

“The number of people who seek food [in church facilities], medication, clothing has increased more than 30 percent since the pandemic began,” he said. Every day, church institutions assist more than 5,000 people in São Paulo.

“These were people who were employed and had work experience,” he added, “but now they have nothing. They had a life with difficulty, now they live in extreme insecurity.”

Brazil’s coronavirus death toll is close to 300,000, a figure that is believed to be a substantial undercount, topped only by the United States. In recent weeks more than 2,000 people died of Covid-19 in Brazil just about every day, as the country became the new global epicenter of the pandemic.

“The number of people who seek food, medication, clothing from the church has increased more than 30 percent since the pandemic began” in Brazil. “These were people who were employed, but now they have nothing.”

Only 2 percent of the 209 million people in Brazil have been fully vaccinated, despite the nation’s past successes with vaccines and strong structural capacity to distribute them. Many Brazilians have been discouraged from signing up for vaccinations because of continuing online disinformation, a problem that has become so worrying that church authorities stepped in to encourage Brazilians to get vaccinated.

A study by the Oswaldo Cruz Foundation, one of the main producers of vaccines in South America, reports that Brazil’s health system faces its greatest collapse in history: 24 out of Brazil’s 27 states have intensive care unit occupancy rates above 80 percent. As of mid-March, 15 of those states had I.C.U. occupancy rates at 90 percent.

In a letter released on March 10 in partnership with other civil society organizations like the Brazilian Bar Association and the Academy of Sciences, the bishops’ conference said that “denialism kills” and “is punishing the most vulnerable” in Brazil. “After a year on the front lines, our health care workers are on the verge of exhaustion,” the joint statement warns. “The inefficiency of the federal government, primarily responsible for the tragedy we have experienced, is notorious.”

Many health experts attribute Brazil’s failure to rein in the pandemic to a series of errors originating in President Jair Bolsonaro’s administration—the president’s hesitation in buying and distributing vaccines, his promotion of drugs that were ineffective against the virus, and his resistance to (and mocking of) social distancing and mask-wearing.

Mr. Bolsonaro recently picked his fourth health minister during the pandemic, the cardiologist Marcelo Queiroga. Center-right members of congress had pressured the president to make a new appointment because of rapidly evaporating public trust in the guidance offered by the former minister, General Eduardo Pazuello, who had no experience in health care.

Even now as the health care system nears breakdown across Brazil, Mr. Bolsonaro persists in exhorting Brazilians to leave their homes for work and has urged Brazil’s supreme court to prevent state governors from ordering regional lockdowns, threatening to take “tough action” against them. Some justices speculate that the president is considering declaring a state of siege that would curtail human rights and dramatically extend his authority.

Only 2 percent of the 209 million people in Brazil have been fully vaccinated, despite the nation’s past successes with vaccines and strong structural capacity to distribute them.

The president had not been a fan of the initial round of emergency aid, but it proved essential in preventing the worst economic effects of the pandemic. The largest welfare program ever launched in the country, it overreached even the renowned Bolsa Família program, a basic income effort that has shown substantial success.

According to a study led by Naercio Menezes-Filho, an economist at the Insper business school and think tank, the emergency assistance kept millions out of extreme poverty during the first months of the pandemic. “Without that, poverty would have been around 19 percent” instead of the 7 to 9 percent maintained up to the end of 2020, the researchers say. Extreme poverty even fell from 3 percent to 1 percent.

Since the aid dried up in December, members of Congress have been pushing the federal government for a new relief tranche. Economy minister Paulo Guedes agreed to an extension, provided that there are future cuts in the public accounts. The proposed phase two of the cash transfers, though, is a much reduced version of the original package. Now about 46 million Brazilians will receive monthly household assistance between $30 and $60 each month, depending on family size, for four months, beginning in April.

Some wish Brazil’s politicians were willing to go even further. Father Lancellotti acknowledged the role played by the emergency aid last year in keeping families from abject poverty, but he believes that the current government is not truly committed to assisting the poor. “The end of the emergency aid weighed heavily, but the impact of the new package will be small because the amount is too low,” he said.

“The role of the church is to have the poor’s back,” Father Lancellotti said. “It is to show solidarity with the poor. There is no doubt about this.”