The Nuns are going to the border 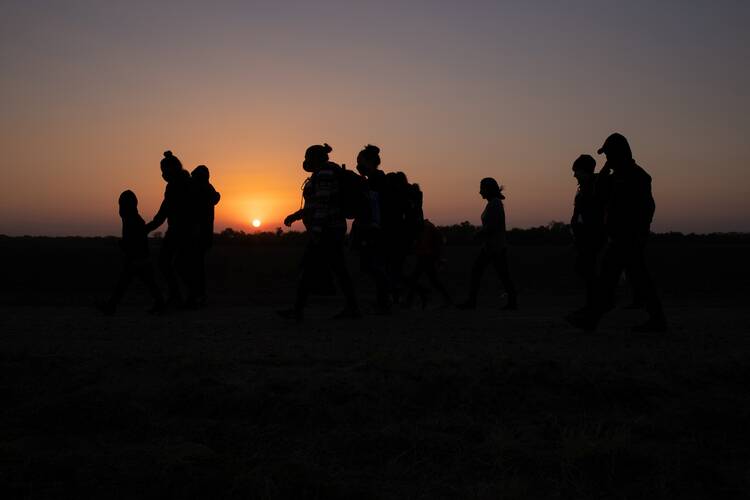 You might have seen Nancy Murray, O.P., in a different role in the not-so-distant past. Before Covid-19 put the kibosh on such things as performing before live audiences, she made a ministry out of appearing as St. Catherine of Siena or the martyred Notre Dame de Namur Sister Dorothy Stang or Mary Potter, founder of the Sisters of the Little Company of Mary. This month in McAllen, Texas, she is assuming a new role, helping families coming across the border transition to life in the United States, answering a call for help from Catholic Charities USA offices all along the Southwest border.

Sister Murray, whose brother Bill has had some acting success of his own, said that with her usual work on standby, it was “a good time” to answer a call for assistance issued on behalf of Catholic Charities by the Leadership Conference of Women Religious. “And I wanted to be working with the families,” she added.

After being detained across the border for months, thousands of asylum seekers have been allowed passage into the United States after President Joe Biden suspended the Trump administration’s “Remain in Mexico” plan. That policy stranded hundreds of families and thousands of individuals in grueling conditions in makeshift camps along the border.

But the sudden reversal threatens to overwhelm the capacity of Catholic Charities USA assistance sites in Texas and Arizona. In San Antonio, Tex., the agency has been asked to coordinate services and assistance to hundreds of unaccompanied minors being temporarily housed at the Freeman Coliseum.

After being detained across the border for months, thousands of asylum seekers have been allowed passage into the United States after President Joe Biden suspended the Trump administration’s “Remain in Mexico” plan.

Explaining her decision to leave Adrian, Mich., and to risk travel during the pandemic, Sister Murray said, “I felt that these are people who have been living in tents for a year, and they have been through storms and hurricanes and snow and Covid, and they needed to be treated with some respect. That is the reputation of Catholic Charities, of providing that dignity to people, and I wanted to be part of that.”

Sister Murray is already a veteran of this kind of humanitarian outreach. She answered a previous call for help in McAllen in 2019 during a similar increase in migration across the border.

She was on her own on April 20, hitting a local five-and-dime to pick up sundries to get her through her month long commitment to Catholic Charities Humanitarian Respite Center and just getting reacquainted with McAllen, but she will soon have more company, as sisters from across the United States are packing bags this week and heading to the border.

Kristan Schlichte, a senior director of membership at Catholic Charities USA, reports that at least 200 sisters so far have noted their intention to respond to the L.C.W.R. appeal. During other migration increases, Ms. Schlichte said, C.C.U.S.A. had been able to juggle additional staff into the border area from other offices around the country. That was just not possible this year, as most agencies were already working at capacity dealing with Covid-19 and related hunger and housing crises, or else were too restricted by pandemic lockdowns to be able to pitch in.

The executive director of L.C.W.R., Carol Zinn, S.S.J., contacted Catholic Charities USA to find out how her membership could help, a conversation that prompted her letter to L.C.W.R. members appealing for volunteers. How will L.C.W.R. members help out when they get to the border?

Any way they can, said Sister Murray. “You have to come with an attitude of ‘What needs to be done?’ and then to see to it, whether that’s cleaning up orange juice that spilled or getting diapers for a baby or dealing with a child’s stomach ache.”

Nancy Murray, O.P.: “I felt that these are people who have been living in tents for a year, and they have been through storms and hurricanes and snow and Covid, and they needed to be treated with some respect.”

She plans to respond to whatever need the day calls up in McAllen. The respite center, Sister Murray said, is already filling up with toddlers and young mothers, many from Nicaragua, so she expects that she will be helping settle and soothe small children for a while. Fortunately, she has stocked up on hair ribbons and more for the children she will be greeting and comforting.

Ms. Schlichte reports that each center will be handling asylum seekers for 24 to 48 hours. They will need rest and a chance to clean up, get something to eat and find new clothes. Many will be moving rapidly on to the homes of their sponsors throughout the United States, and volunteers will be needed to assist them with making travel plans.

After seven years in a leadership position with the Adrian Dominicans in Michigan, Mary Jane Lubinksi, O.P., was on sabbatical this year but was happy to answer the call to help out in San Antonio. “I wanted to roll up my sleeves, so here I am.”

She is part of a team of volunteers working with more than 2,000 teen boys who are being temporarily housed at the coliseum site and expects to stay through May. “I’m right where I belong,” she said. “There are other sisters here too and more coming, which is wonderful.”

The 14- to 17-year-olds “unaccompanied minors” she is now accompanying will take longer to transition to more permanent status. She describes the boys as "thoughtful, brave and traumatized."

Many traveled on their own or in small groups, fleeing Central America’s northern triangle states of El Salvador, Guatemala and Honduras where they were prime targets for gang recruitment. Many spent months waiting in Mexico. Now Catholic Charities has to connect the boys with family in the United States and confirm their relationships and ability to sponsor the boys before they can be released.

Mary Jane Lubinski, O.P.: “That is the biggest goal, getting them united with family, so they can move on to their future.”

There are emotional reunions just about every day at the improvised shelter site. Sister Lubinksi said staff and volunteers here just the day before witnessed 15-year-old twins being reunited with a mother who last saw them when they were babies. The boys had been left behind years ago when their parents came to the United States to find work.

How did they handle the reunion? “Tearfully,” she said, “tearfully,” adding that the boys were not the only ones crying. “That is the biggest goal, getting them united with family, so they can move on to their future.”

Sister Zinn said in addition to organizing volunteers to send down to the border, L.C.W.R. congregations are raising donations of cash and supplies to send out to Catholic Charities respite sites. Volunteers will be needed both at the border facilities and later on back in their home communities when families and unaccompanied minors are relocated. She said it is especially urgent to have enough bodies to prevent unaccompanied children from remaining too long at crowded detention facilities run by the government.

Sister Murray knows that some Americans feel anxious or worse about the migrants and asylum seekers coming across the border. All she can say to allay such fears is “come and see.” Many of the asylum claimants she will be assisting are fleeing gang or government violence in Central America, or escaping collapsing economies or communities left uninhabitable after two serious hurricanes in 2020.

“When you hear the stories and see the people yourself, they are not just a nameless bunch of people in a crowd from a 10-second news report,” Sister Murray said. “They would rather be in their home countries safe and raising their children there. It is fear and violence that’s forcing them to come here.”

These are the desperate few, she added, who had “the means and the dreams” to make it this far. She will be there to greet them when they arrive.

Watch next: Is there a “crisis” on the U.S.-Mexico border?