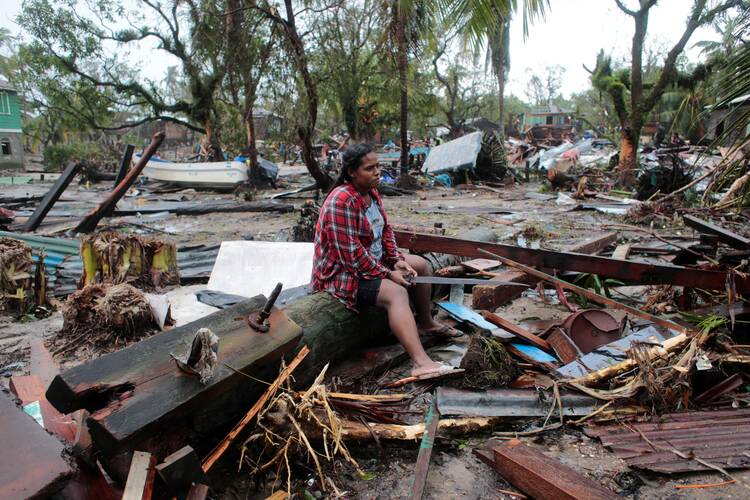 Across Central America, in cities and in farming and indigenous communities, thousands of families were still digging out of the wreckage left behind by Hurricane Eta when Hurricane Iota traced essentially the same destructive path. Its Category 4 landfall on Nov. 17 in Nicaragua was just 15 miles away from the spot where Eta, another Category 4 storm, had crashed ashore on Nov. 3. Its rainfall quickly flooded already saturated ground throughout the region.

David Cronin, a government affairs specialist for Catholic Relief Services in Washington, said that C.R.S. and other humanitarian teams were still assessing the “combined devastating impact that both storms have had,” but it was clear on Nov. 20 that millions of people across Central America and into Colombia and southern Mexico were in need of assistance.

He added, “Immediate needs are pretty clear…food, water, hygiene items, mattresses, bedding.” He said the relief effort in the coming days will surely be complicated by the coronavirus pandemic. As C.R.S. teams respond in Nicaragua, Honduras and Guatemala, he said, “We cannot forget the reality of Covid-19, and we cannot forget the need to prevent further transmission of Covid-19.”

Relief agencies are describing the unprecedented double strike of Hurricanes Eta and Iota as the greatest humanitarian crisis in Central America in at least a generation, comparable only to the devastation wrought by Hurricane Mitch in 1998.

“We’re running out of superlatives for this Atlantic hurricane season,” Clare Nullis, a spokesperson for the World Meteorological Organization, said at a United Nations news briefing in Geneva on Nov. 17. “It’s record-breaking in every sense of the word. We are currently, with Iota, on the 30th named tropical storm.”

Ms. Nullis said that at this time of year, hurricane season should be winding down, but instead there has been a tragic late surge. “Iota is the strongest storm in the hurricane season so far to make landfall.”

Across the globe as Eta and Iota were marching through Central America, the Philippines endured two of the strongest typhoons on record. Many connected the unprecedented weather events to the increasing threats engendered by climate change. Just a day after Eta made landfall, the Trump administration formally withdrew the United States from the 2015 Paris Agreement on Climate Change, a decision it had announced soon after President Trump’s election.

“It is fair to say that climate change does play a role,” said Mr. Cronin. “Trends show that we are experiencing an increasing number of more powerful and more devastating storms.”

He notes one of the grand ironies of the accelerating impact of climate change: “When we ask ourselves who are these storms impacting the most, it’s poor communities that have done the least to contribute to climate change.”

The United States has announced $17 million in humanitarian aid so far to begin to respond to the crisis in Central America, but C.R.S. and other relief agencies will be seeking much more.

One of the grand ironies of climate change: “When we ask ourselves who are these storms impacting the most, it’s poor communities that have done the least to contribute to climate change.”

“We will continue to push for not only the immediate needs but the long-term recovery needs of the communities that are being impacted,” Mr. Cronin said. Humanitarian assistance and poverty eradication programs in Central America have been cut in recent years by the Trump administration. Mr. Cronin hopes the response to the double storms could signal a reversal to that trend, noting that the United States had delivered more than $1 billion in aid to the region after Hurricane Mitch.

The United States could also assist the region’s recovery through a reassessment of its current immigration policy, Mr. Cronin said. Though the Trump administration has been unwilling to extend existing temporary protected status, which shields migrants from specific countries from deportation, or to create new T.P.S. categories, he argued that position should be reconsidered in light of the dramatic conditions in Guatemala, Honduras and Nicaragua. “Our position is that returning people to these impacted countries would be not only unwise, it would be inhumane.”

Pondering the long-term recovery of these historically vulnerable nations, Mr. Cronin also urged that a more forceful response to climate change must become part of the discussion.

“These two storms were preceded by multiple years of drought in the region,” he said. “We’re seeing extreme weather with drought on one hand and...intense hurricanes on the other, and it’s becoming very difficult for farmers and communities to adapt to be able to support their families and their communities.

“Natural disasters of this magnitude only increase the vulnerabilities that lead to migration,” he added, urging a more merciful approach to migrants from the region.

Push factors out of the region obviously include violence and lack of economic opportunity, he said, but increasingly climate has been playing a role, especially among the region’s indigenous subsistence farmers. “We need to look to the root causes at what’s driving migration,” Mr. Cronin said, “and to address those humanely, to address those issues justly and to work together with the communities who are impacted to find solutions to allow them the opportunity to thrive in their home communities rather than being forced to migrate to the U.S.”