Why you should read St. Catherine of Siena—in her own words—during the coronavirus pandemic 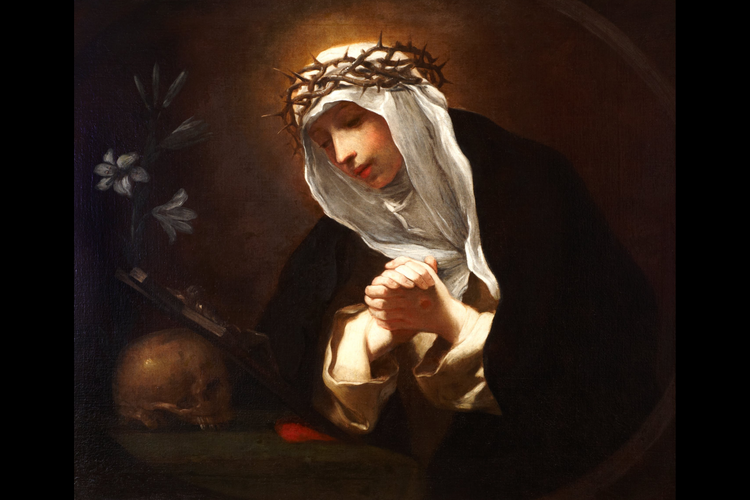 The Black Death has been described as the greatest catastrophe in history. Between 1346 and 1353, this epidemic of bubonic plague killed 50 million people—60 percent of the population in Europe. Caterina di Giacomo di Benincasa, better known as St. Catherine of Siena, was born right in the midst of it, on March 25, 1347.

You may have heard a lot about St. Catherine’s life. You have probably heard about how she was instrumental in bringing the papacy back to Rome from Avignon in 1377. You also may know that she cut her hair short as a teenager in defiance of her parents. They had been pressuring her to be more ladylike and more attentive to her appearance so she could attract a husband.

But Catherine had her heart set on someone else. She had her first vision of Christ when she was 6. At 18, she joined a group of lay Dominican women, known as the Mantellata, and dedicated her life to prayer, penance and charitable works, especially tending to the sick.

Catherine is a model of contemplation in action, no doubt. But for many, the biography of her life has overshadowed her writings.

To get a real sense of her personality and message, you must read her letters. We have nearly 400 of them. For example, to Gregory XI, the pope who came back to Rome at Catherine’s urging after the papacy had moved to Avignon in 1309, she wrote: “I beg you, on behalf of Christ crucified, that you may not be a timorous child but manly. Open your mouth and swallow down the bitter for the sweet.”

These are bold words for any Catholic to say to a pope, even today. But Catherine wrote these words more than 650 years ago as a lay woman with no formal education. And what is even more revealing, the pope actually listened.

Catherine wrote to bishops and priests, religious sisters and lay Catholics. Her mystical experiences with God drove her to such actions. She recognized the needs of others, and she responded. Her writings can help us to respond more fully to how God might be calling each of us in the midst of the current pandemic.

In 1374, Father Raymond di Capua became St. Catherine’s spiritual director and confessor, though it is clear from her letters to him that she gave him plenty of spiritual direction as well. Father di Capua wrote the first biography of Catherine. At the end of her life, she entrusted to him what she referred to as simply “my book.” Her followers eventually gave it the name by which it is known today, The Dialogue.

The Dialogue is a long conversation between Catherine and God. Over the years, legend grew that St. Catherine had dictated the work to scribes during a five-day ecstasy. But, according to Suzanne Noffke, a Dominican sister and St. Catherine scholar, it probably happened over the course of a year near the end of her life. (Sister Noffke’s translations of Catherine are the best in the English language.)

Trying to summarize The Dialogue corrupts its message. As its name indicates, it is a long conversation between two people who love each other deeply. The same topics come up a number of times, and if you just hear part of the conversation, it is hard to get a sense of the whole meditation. In its entirety, The Dialogue is not a linear argument but a series of circles that teach through layers.

You cannot understand The Dialogue apart from its imagery.

You cannot understand The Dialogue apart from its imagery. For example, Catherine describes the human soul as a tree. The tree, which is made for love, should be planted in the soil of humility. The marrow of the tree is patience, and the branches are true discernment. Being grounded in humility and self-knowledge, a key aspect of Catherine’s thought, the soul can discern the will of God. Once we know who we truly are, we will live as children of God.

“All of you are trees of love,” God says to Catherine. “You cannot live without love because I made you for love. The soul who lives virtuously sets her tree’s root in the valley of true humility. But those who live wickedly have set their root in the mountain of pride, and because it is badly planted, it produced fruit not of life but of death.”

St. Catherine also describes the soul as a vineyard. God is the gardener, but through our actions we can work the vineyard of our soul. We are pruned through suffering and are grafted to Christ through the incarnation. And all human beings are connected to each other “without any dividing lines.” God plants Christ, the true vine, into the vineyard of humanity.

“This is why I have put you among your neighbors: so that you can do for them what you cannot do for me,” God says to Catherine. “That is, love them without any concern for thanks and without looking for any profit for yourself.”

The central image of The Dialogue is Jesus Christ as a bridge between God and human beings. Before sin, God and humanity were united. Sin is the river that divides us from God, but Jesus, fully human and fully divine, made himself a bridge. The bridge is our way back to God.

The central image of The Dialogue is Jesus Christ as a bridge between God and human beings.

Still, the choice is ours. “But my son’s having made himself a bridge for you could not bring you life unless you make your way along that bridge,” God says to Catherine. It is up to us to climb the steps and make our way along the bridge.

“If you love me the way a servant loves a master, I as your master will give you what you have earned,” God says to Catherine. “But I will not show myself to you, for secrets are shared only with a friend who has become one with oneself.”

Being one with God was always the goal for Catherine. In her actions and writings, she wanted to lead others into that same union with God. That is an open invitation for us today.

On Oct. 4, 1970, Pope Paul VI declared St. Catherine, along with St. Teresa of Ávila, as a doctor of the church. During this time of social isolation, we can wade into St. Catherine’s writings and into dialogue with God. At a time when many of us feel helpless, Catherine can lead us into a deeper union with God, to become friends of God and servants to our neighbors.