What makes an effective inaugural address? Advice for Joe Biden from an Obama speechwriter. 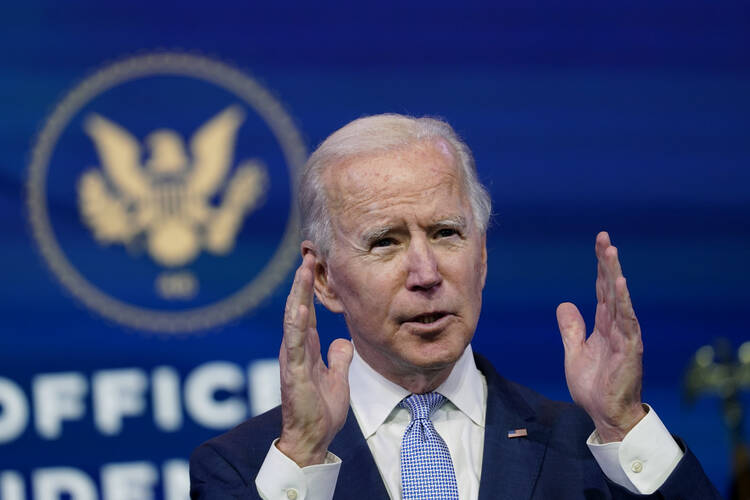 The weeks leading up to the inauguration of President-elect Joseph R. Biden Jr. have been marked by instability and national dread. On Jan. 6, thousands of insurrectionists assaulted the U.S. Capitol while the House of Representatives and Senate met to certify the results of the 2020 presidential election. On Jan. 13, Donald J. Trump became the first president in American history to be impeached twice by the House of Representatives. President Trump has also said he will not attend the inauguration of his successor, which would make him the first president since Andrew Johnson in 1869 not to do so. And the Covid-19 pandemic continues, with the daily death toll nearing 4,000 Americans.

Still, Mr. Biden is hoping to continue the U.S. tradition of a peaceful transition of power. Once sworn in, he will take the rostrum and deliver his inaugural address. After months of campaigning, of political rhetoric and partisanship, the new president will stand before the nation, aware of the many citizens who did not vote for him, and will try to bring the American people together. To find out just what President Biden might say and why, America spoke with Terry Szuplat, who served in the Obama administration as special assistant to the president, as senior director of speechwriting at the National Security Council and as deputy director of the White House Speechwriting Office.

The new president will stand before the nation, aware of the many citizens who did not vote for him, and will try to bring the American people together.

A president is “really the one person who can speak for the whole country,” noted Mr. Szuplat. “As a candidate, you’re representing a party, a platform, you’re appealing to your constituency to win an election.” But on Inauguration Day, he said, “it’s the very first time they are speaking as the constitutional office. They’ve aspired to it, they’ve campaigned for it, they’ve appealed toward it, they’ve spent months, maybe years, to show the American people that ‘I am ready, that I can inhabit that office, that you can see me in that role,’ and this is the very first time they are doing it.”

True, inaugural speeches are frequently forgotten. Most Americans would struggle to recall much outside of John F. Kennedy’s wonderful use of chiasmus in “Ask not what your country can do for you, ask what you can do for your country,” and Franklin Delano Roosevelt’s humdinger in his first inaugural: “The only thing we have to fear is fear itself.”

So what makes an effective inaugural speech? For Mr. Szuplat, it is some mixture of “the moment, the messenger and the message.” For non-inaugural examples, “think of Martin Luther King at the height of the civil rights movement on the steps of the Lincoln Memorial; think of F.D.R. in the well of the Congress the day after the attack on Pearl Harbor. You have moment, messenger and message.”

That means the elements of a memorable speech are not always within the control of the president, said Mr. Szuplat. “The irony of the inaugural is that you have the moment that is significant, but it might not be a pivotal moment in the life of the country.” Mr. Biden may be speaking at one of those pivotal moments, with the attack on the Capitol still fresh in everyone’s minds. “It absolutely cannot and should not be ignored,” said Mr. Szuplat.

Even the finest of prognosticators would have trouble guessing exactly what a president is going to say in an inaugural address, but Mr. Szuplat believes that there are certain indicators. “Every presidential speechwriter,” he said, “starts writing speeches by looking back at what predecessors said on a topic or in a place…. When you’re writing for the president, you are writing another chapter in the very rich, long book that is the presidency. So you want to pull those narrative threads forward and you want to add to them, build on them in a unique way.”

What makes an effective inaugural speech? Some mixture of “the moment, the messenger and the message.”

But the type of language employed typically draws on what is most comfortable and familiar to the new president: “If you want a sense of what Biden is going to say and how he is going to say it, it is important to look at his past speeches, more so than past inaugural speeches.… They have a different title, but they are not a different person when they assume the presidency.”

Similarly, presidential rhetoric draws on the particular strengths of the person in the office: “If you get someone like President Obama, someone who is known for their soaring rhetoric, you are more likely to get that. If you have a president who is more of a tactician, someone who spent their time in the legislative trenches, you may get more of a laundry list of issues. Every inaugural address probably has both.”

Though President-elect Biden undoubtedly has his own set of priorities, Mr. Szuplat thinks he will turn to a theme often heard in inaugural speeches. “If you come into the office with the country deeply divided,” Mr. Szuplat said, “it becomes even more important for a president to speak to all Americans…. Whatever you think of Joe Biden’s politics or his policies, he has made it a core theme of his candidacy, and now presidency, to bring people together and heal their divisions.”

He added, “Throughout our history, our presidents have been called upon to stop being an overtly partisan figure” after their election, “and I think that’s one of the marks of a great president: Can they make that transition?”

“Whatever you think of Joe Biden’s politics or his policies, he has made it a core theme of his candidacy, and now presidency, to bring people together and heal their divisions.”

The inaugural address, Mr. Szuplat said, “is one of the first indicators of whether they can, whether they want to, whether they will. The most successful presidents, the ones we recognize as transformational or great, they never take their partisan hat off completely. But they do recognize that they must represent and speak to people who did not vote for them.”

But that call for unity cannot ignore stark realities. As Mr. Szuplat noted, “When Abraham Lincoln spoke about unity, that was a unity that half of the country didn’t want.”

Mr. Szuplat described the current reality: “The inauguration will be at the Capitol—President Biden will be standing in the exact same place—where 14 days before, a violent mob attacked police, murdered an officer and tried to overturn a free and fair election. This was an unprecedented attack on our democracy. It must be acknowledged, explicitly, and we have to come together as Americans and demand that something like that never, ever happens again.”

Mr. Szuplat said that in order for a sense of unity to be restored, there must be accountability: “We can’t pretend that this didn’t happen—the first occupation of Congress since the War of 1812. We can’t, as some are saying, just ‘move on’ and go back to business as usual. The perpetrators and those who instigated them have to be held responsible—legally and politically. I fully expect that President Biden, in his inaugural, will call for accountability. What form that accountability takes, of course, is something we’ll have to work through as a nation in the coming days, weeks and months."

Mr. Szuplat also thinks that Mr. Biden will allude to elements of his personal experience that people can relate to, especially after such a difficult year: “This is a moment of profound grief, loss and hardship. This is what made him right for this moment. He connects with people in a way that few politicians can. It’s one thing to feel somebody else’s pain, it’s another to know someone else’s pain…. This man has known more grief than most of us have.”

Suffering is not unknown to presidents, but it can seem that the best speakers to hold the office were the ones who suffered the most. Abraham Lincoln endured the loss of his son and the devastation of the Civil War; Franklin D. Roosevelt spent the better part of a decade recovering from polio and relearning to walk; and John F. Kennedy fought a number of health ailments his entire life. But Mr. Szuplat noted a difference: “Both in F.D.R.’s and Kennedy’s cases, the public was largely unaware [of their suffering]. In Biden’s case, he has been very open about it, very candid.” Americans know of Mr. Biden’s sorrows, including the loss of his first wife and his daughter to a car accident and his eldest son to brain cancer.

Mr. Szuplat added, “If one of the great questions for the American people right now is ‘How do we get through this profound loss, can there be better days?’—who better to point the way than someone who has lived through the darkest moments any person can face? I think it’ll be a huge element of his inauguration and of his presidency…. He might end up being the most perfect leader for this moment because of his life experience.”

At the end of his interview with America, Mr. Szuplat was asked for his favorite piece of presidential rhetoric in American history. He answered, “I would have to go with Lincoln’s Second Inaugural Address.”

And if Mr. Biden is intent on seeking unity and healing divisions, he may take counsel in Mr. Lincoln’s words from 1865: “With malice toward none, with charity for all, with firmness in the right as God gives us to see the right, let us strive on to finish the work we are in to bind up the nation's wounds, to care for him who shall have borne the battle and for his widow and his orphan—to do all which may achieve and cherish a just and lasting peace among ourselves and with all nations.”