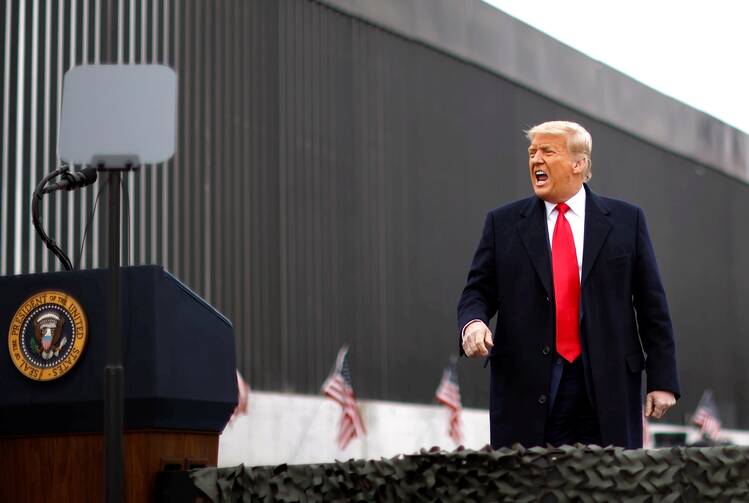 Today, the U.S. House of Representatives impeached President Donald J. Trump for his role in instigating the riotous insurrection of Jan. 6, 2021. That impeachment was endorsed by America’s editors on Jan. 11. In calling for the impeachment of a sitting president for only the third time since our founding in 1909, the editors wrote:

To be sure, impeachment and conviction are impractical and unlikely to be successfully concluded during the relatively few days that remain in Mr. Trump’s term. But such an outcome is not impossible, and any delay whatsoever would be a profoundly unwise substitution of tactical calculation for constitutional principle. The damage Mr. Trump has caused is without precedent, and our legislators should brook no delay in holding him to full account and thereby establishing a standard of acceptable behavior for future presidents.

In the wake of Mr. Trump’s unprecedented assault on the constitutional order, Congress must act now, if for no other reason than to register with the high court of history the nation’s collective revulsion, as well as its commitment to ensuring that such a depraved and perfidious abuse of the presidential office never again besmirches the character of the nation.

A report in The New York Times on Jan. 13 that several prominent Republicans now support the impeachment process may indicate that impeachment and conviction are not as “impractical and unlikely” as the editorial suggests. Indeed, 10 members of the G.O.P. voted to impeach the president on charges of “inciting violence against the government of the United States.” Regardless of the outcome of the Senate trial, I believe that history will record that during this time of national crisis, America stood not only on the side of right but on the right side of history.

And yet that is not wholly satisfying, perhaps because I suspect that Mr. Trump’s departure from the White House, by whatever means, will not itself bridge the gaping divisions these events have further revealed.

President Trump’s departure from Washington, D.C., will not heal the country in the ways we tend to think it will. The cycle of rivalry and violence will likely recur.

René Girard, the late literary critic and philosopher, once described what he called “the scapegoat mechanism.” Mr. Girard’s thesis was that a human community, particularly its culture, is formed in part through scapegoating—a process by which a group defines itself over against an individual. Perhaps that much is obvious to you, as it is to me. What is not so obvious are two additional points Mr. Girard made: first, that the individual scapegoat need not be morally guilty or innocent for the mechanism to cause the desired effect; and, second, the effect—the sense of peace or stability created by the purge of the scapegoat—does not last. Soon divisions within the community re-emerge, and the cycle of escalating rivalries begins anew.

If Mr. Girard was right, that does not mean that Mr. Trump is not responsible for his actions or that he should not be impeached and convicted. It does mean, though, that we must recognize the limits of that process. Mr. Trump’s departure from Washington will not heal the country in the ways we tend to think it will. The cycle of rivalry and violence will likely recur.

Mr. Girard believed, however, that while deep-seated and seemingly intractable, the cycle is not inevitable. There is a different way, one that reduces the likelihood of violence. That way is the Gospel. As I once put it in another context, "if we are able to build a completely just world tomorrow, in terms of our social structures, but are not loving and forgiving one another, then we will have failed. And if we think we are going to build a more just world without the radical acts of love and forgiveness to which the Gospel testifies, then we are deluded.”

Surely, we do not bear the same share of individual responsibility for these events, but the truth is that all of us bear some responsibility. As hard as that may be to admit, it is a necessary step. To put it another way: The path to communion begins by admitting what we have done and what we failed to do. So for the church. So for the country.