Dear March for Life organizers: Thank you for canceling the in-person march 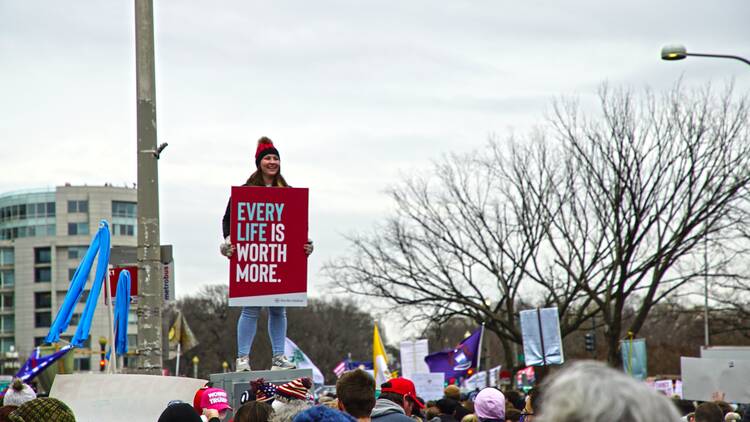 The 2020 March for Life (Photo provided by author)

Today, the organizers of the March for Life in Washington announced the annual rally would be moving online. Citing the surge of Covid-19 cases and heightened security concerns in the nation’s capital, the group asked “all participants to stay home and to join the March virtually.” I imagine it was a difficult call for them to make, but it was the right one.

I first attended the annual March for Life in 2018. Living in D.C. at the time, a friend and I walked several miles downtown to join the crowd of tens of thousands on the frost-and-mud-slicked National Mall. Despite the January cold, the warmth and energy of the people—many of whom were high school and college students—was undeniable.

Returning to the march each of the next two years, first in a personal capacity and then reporting for America, I was struck by that same enthusiasm. But these years overlapped with a growing personal concern about the future of the pro-life movement, which increasingly seemed to me to be a “pro-birth” one. The movement’s ties to President Trump also deeply concerned me; this union was consummated in January 2020 when Mr. Trump became the first president to address the march in person.

Today, the organizers of the March for Life in Washington announced the annual rally would be moving online. I imagine it was a difficult call for them to make, but it was the right one.

Yet the compassionate and deeply felt convictions of the marchers—those lending their legs and hearts to a future for the unborn—gave me hope about the movement each time I returned to the event. I talked with many of these people: two long-distance friends separated by 40 years and 2,000 miles whose passion for life led them to meet up at the march; a Boston College freshman who had been working on his pro-life club’s outreach to women in crisis pregnancy situations; a Native American man, his young son clutching his chest, who had helped organize travel for 200 Native American families to attend.

Though I was less enthralled by the pro-life movement as a whole, I was consoled each year by the love displayed by these individuals. So, it is with sadness that I make an appeal to those still hoping to travel to Washington on Jan. 29:

Please, listen to the organizers and stay home.

An in-person March for Life to the Supreme Court—involving mass travel of participants, days after a pro-Trump mob stormed the Capitol, in the midst of a rampaging Covid-19 pandemic—would have further jeopardized life and harmed the future viability of the pro-life movement.

It was prudent for organizers to cite the pandemic as a reason for moving the March online. We must continue to prevent the spread of Covid-19, with the end of the pandemic in sight but not within reach. It is likely that some parts of the march could have been accomplished safely—remaining outdoors, wearing masks—as we saw from this summer’s protests against racial injustice. However, the travel of large groups from non-local areas poses substantial risks. The C.D.C. would classify a gathering of this kind in its “highest risk” category, even with participants outside the whole time.

To protest so heinous an act as abortion, is it permissible to ignore public health guidelines? The question merits serious consideration, but I would answer in the negative.

Of course, there is a valid question about whether the ends justify the means: To protest so heinous an act as abortion, is it permissible to ignore public health guidelines? The question merits serious consideration, but I would answer in the negative.

The pro-life movement, to live up to that title, cannot enter the business of trading lives. The United States loses thousands of lives each day to abortion. The United States is losing thousands of lives each day to Covid-19. Both are tragic, but there are immediate and clear steps to combat this second tragedy, such as staying close to home and not congregating in large groups, that every individual can and should take. We have a clear opportunity to advance the culture of life one step further. We can say no to the “virus of indifference” that has ensnared people to such an extent that they shun even the most basic safety measures in favor of an uncharitable obsession with individual freedom.

As a teen, I chose adoption. Why are stories like mine missing from the abortion debate?
Tatum Hunter

The timing of this march is significant. The pro-life movement will only have a limited window in which to separate its identity from Mr. Trump, whose lack of competent leadership during the pandemic cost thousands of lives. As a pro-life movement, rectifying our collective attitude towards the pandemic is the first step towards reclaiming our moral legitimacy as people who unapologetically and compassionately care for all life. This march is a good place to start.

As an alternative to the march in D.C., I suggest looking into state and local marches that take place around the country, if you can travel to them safely and they are able to ensure social distancing. Many dioceses have prayer vigils for life, either in person or virtually. Or, organize your own prayer for life within your parish community. I will attend my local vigil at St. Patrick’s Cathedral in New York City as I look forward to returning to the March for Life in 2022.